The upcoming M.O.M. 12″ for Don’t Be Afraid is a sombre dedication to the Detroit producer’s mother who passed away earlier this year.

The Differ-Ent alias of highly respected Detroit DJ and producer Eric ‘DJ Bone’ Dulan was introduced through Benji Semtek’s Don’t Be Afraid in suitably pounding fashion back in January. The Subject Detroit founder would later state in an interview with us that he began the Differ-Ent project as a means to positively channel some dark thoughts. “There was a lot of dark stuff in my life at the time. I don’t get depressed or take it out on other people. Instead, I deal with it through music. I leave my music there and then I decide later,” he explained. “I thought I needed something that was aggressive. Differ-ent is a darker type of techno.”

News of a second Differ-Ent 12″ due on Don’t Be Afraid next month further reveals the context of what Dulan was referring to, with the music on M.O.M. produced in the aftermath of his mother Jacqueline Y. Dulan-Hinds passing away after a battle with cancer. The upcoming 12″ can be streamed in full below, whilst Dulan’s statement regarding the music can be read in full below.

“First-off, I need to explain something here. I’ve never made music just to make it. I don’t go into the studio and try to produce a “hot track” for the club. I go in when I feel the need to express myself or convey an emotion or situation, then convert it into sound.

I was heavily influenced by music as a child. My Mother listened to all types of beats and soulscapes. Whether on vinyl or 8-track (yep, 8-track), I’d watch her play her jams and sink into the music. I enjoyed listening & dancing along but I slowly started to realize it was involuntary. The music was moving me! I now understood…she wasn’t listening to the music, she was FEELING the music. Mom noticed me studying the music and expressed to me that it was all about feeling that vibe the song is giving you.

After this, certain music and sounds became my life-soundtrack, the ongoing, evolving score to me growing up in Detroit. Detroit was/is a hard city so my Mother made sure I wasn’t soft…that’s for sure. But she also let me know that the universe is bigger than Detroit therefore my dreams should be too. I’ve lived my life by this and have accomplished more than I ever imagined, all while staying true to myself and my roots.

Living in The D for over 30 years I’ve been through a lot. Good & bad times, easy days & dark days…but nothing prepared me for April 6, 2015. That’s the day my Mom lost her battle with cancer. It’s been EXTREMELY difficult for me to process. One of the first things I did when she passed was went into the studio and created a song for my Mother. I just let it all come out and into the music, and the result was “M.O.M.”, a new song.

“M.O.M.” conveys how upset I was/am about losing her, my anger towards the cancer that took her and my heartache. While creating “M.O.M.” I started to reminisce about all that she’s taught me and the great times we had. I think this can be felt about halfway through.

And finally I tried my best to convey through sound what I picture as her ascension into Heaven to join the other Angels and my love for her.

This is THE most personal track I’ve ever released but my wife Ahnne and I feel that it is alright to share it with the people who’ve supported my music over the years and understand me.

This track shows that you can be hard and soft at the same time just like my Mother taught me.

Don’t Be Afraid will release M.O.M. by Differ-Ent on December 2. 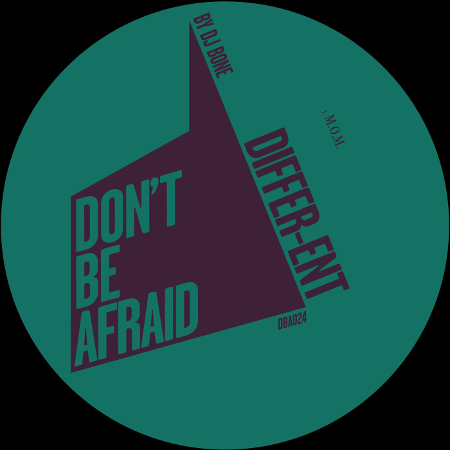