Florist – Style of the Body 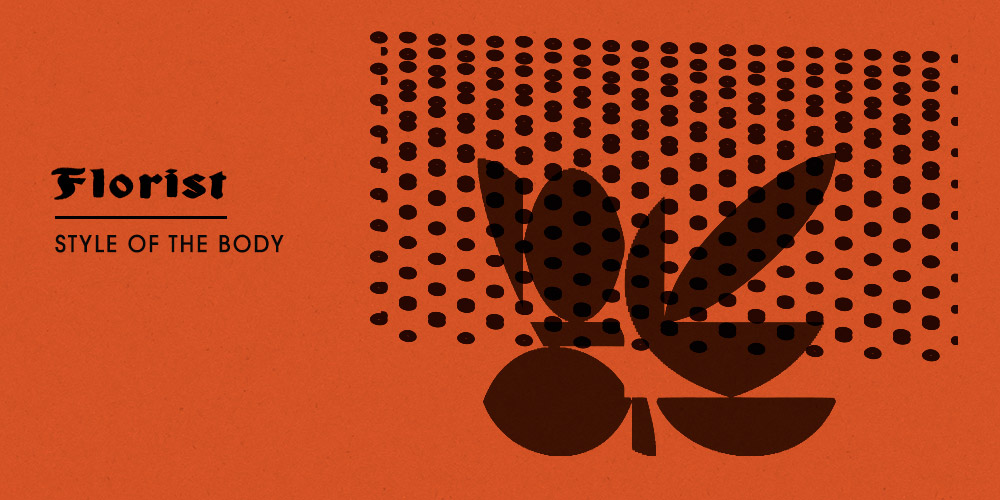 Vancouver fixture Logan Sturrock shares the story behind his work as Florist with Brendan Arnott.

“Bubba! Hey! Come on! This way!” Logan Sturrock is on the phone with me, but his attention is elsewhere. Bubba, his Staffy-Sharpei mix, is sprinting around in circles during their Sunday afternoon walk. The scene surrounding Sturrock sounds almost like a postcard; Bubba and he are ambling along a set of out-of-commission train tracks, makeshift neighbourhood gardens ripe with produce stretching in front of him on each side. There’s a brief pause, and then Sturrock sighs. “Just one sec,” he tells me. “My dog is just going to the bathroom… you called at the perfect time.”

Abandoned train tracks overgrowing with new life feels like a fitting location for the man known as Florist, whose productions champion a fusion of the organic and the mechanical. Comforting and warm one moment, while neck-jerkingly propulsive the next, they sound disorientingly displaced from present day. The intensifying, flanged-out percussive clatter of “Final Bounce” feels like a relic of yesteryear’s dancefloor that throws a series of continual wrenches in expectations, and “Marine Drive” comes across as an emotionally-charged anthem thanks to the unhurried, soulful organ stabs that arrive halfway through. This year alone, Sturrock’s contributions to Vancouver’s Pacific Rhythm and Glasgow’s All Caps have caused the dance music world to do a giant double-take; it’s most certainly a sign of things to come. 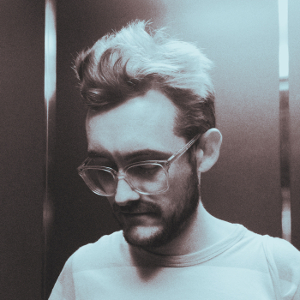 Information on Sturrock’s musical history is pretty scant on the internet however, so naturally I ask for a bit of a crash course on the origins of Florist. While Sturrock chuckles and denies there’s much substance behind the name itself, admitting that he was listening to lots of dubstep artists with “-ist” suffixes at the time, Florist’s music itself is the light at the end of a long tunnel of other projects. Sturrock began as a rap producer, then slowly found his creative impulses pushing him towards the nightclub. “Basically, I just wanted to make dance music that I could be experimental with” he says. “I kinda lost interest in rap music, not to say that there isn’t a really deep and crazy world there, but I couldn’t find a way to continue to grow. I think I found that in electronic music. ”

A lifelong resident of Vancouver, Sturrock acknowledges that Florist developed concurrently with the projects of his other friends and contemporaries, culminating in the still-emerging, widely-championed ‘Canadian Riviera sound’ which even some members of the Mood Hut crew admit they are baffled by. “Vancouver’s a funny place,” Sturrock tells me, a tone of amusement in his voice. “It’s always kind of had a dance music thing going on, but it comes and goes. It’s getting a lot of attention right now, but we’ve had it in our history for a long time.” He informs me about something he’s been reading lately called Discotext Magazine, several hundred pages of Vancouver’s disco, house and techno club culture from 1988 – 1990 chronicled in print.

Club history seems foundationally important to Sturrock, as he shares that a photocopied poster from a ‘90s Ron Trent and Gene Hunt Chicago Sound Promoters show as his favourite piece of graphic design. “I’m sure everyone knows about places like Rave Archive or Deep House Page as these just places to just get lost in,” he tells me. “That aesthetic really appeals to me. There’s some sort of naive quality to it, something they were onto back then that’s hard to pack into things now – you just get glimpses of how things were.”

Similarly, his most formational house track is a product of the late ‘80s, K-Alexi Shelby’s shimmering “Essence of a Dream”. When I ask Sturrock to pin down what makes it meaningful to him, he considers his words with a tone of slight disbelief, as if he’s still amazed it exists. “It’s one of those records to me that’s just so mysterious. It just sounds like it’s from an entirely different time, it’s like a time machine when I listen to it,” he says. “It’s easy to have access to a lot of things today, but maybe the thing that we don’t have access to now is the attitude, or some of the harder things about those scenes to translate,” he muses, adding “this is why I think it’s really important to dig deep.”

Listening to Sturrock’s work, you can hear a multitude of vocal samples spritzed throughout his catalogue – from an echoing voice calling out a greeting at the beginning of “Earth Dance”, to a cheeky monologue about Vancouver’s excessive rain in “Marine Drive”. Given that Sturrock never uses formal vocalists, but often sprinkles sound bites throughout his work, I’m curious what importance vocal samples have in his work.

“It’s funny, I always include them – I’m just attracted to the human voice,” he responds. “I like to think of vocals as kind of a strange rhythmic instrument – it’s not supposed to tell a narrative or anything, it’s more a percussive instrument or feature in the same way a certain lick, or a few chords, or a drum pattern or a fill would be.”

With further consideration, however, Sturrock fleshes out his sampling justification. “The sample from “Earth Dance” was actually from a Camino Del Sol song, and I greatly admire the artists who I pull from. I guess vocals are also me trying to evoke something from the spirit of that time, corny as it sounds.”  Assuring him that it’s not corny at all, he continues. “Also, it’s kinda referential in a way; it adds a little bit of an emotive element to tracks. References, or maybe some different story that you get only a glimpse of. I’m interested in making music that I don’t really have any knowledge of the time that it was made in.”

Today, the internet leaves very little room for mystery. This is true for Sturrock himself – after some quick googling, I stumbled upon the fact that he has a prolific body of work – from graphic design credits for some early Mood Hut’s records, to a credit in a surrealist skateboarding film. Curious about where music fits in, I ask him if DJing is an extension of his own art practice. “Definitely – right now I’m really trying to figure out where it all fits in,” he responds, admitting that he’s just graduated from five years at Emily Carr University of Art & Design in Vancouver, and that he’s finally getting a chance to decompress and focus on music.

Mid-sentence, he yells, “hey! Get outta there!” and it takes me a few seconds to process that he’s talking to his dog Bubba. It’s unclear whether Bubba complies with his request. Sturrock returns to my question, taking his time to find the right words. “It’s kind of a cliché too, but I don’t see any distinction between art forms, there’s all these boundaries that people make around being an artist or an architect or a musician or whatever, but I think that you should… do whatever you want,” he says chuckling.

‘Do whatever you want’ seems to be the ethos for Sturrock’s approach to making tracks as well. When I ask him about whether he has any kind of production routine, he admits that he’ll “usually start by sitting around and do nothing for a long time, until I get really itchy to make something, at least.” There’s something unhurried and mindful about Sturrock’s approach; in line with his laid-back persona, nothing feels forced.

“Making tracks is just sketching really, doodling around until something starts to take shape. Some of the stuff that I labour over for a really long time, I hate, and sometimes the kind of stuff that’s made in one afternoon comes out feeling like the best. It’s really impossible to tell where an idea’s going to come from,” he says. “I mean, I wish I could, but it all kind of feeds into each other. There’s a value in just playing around, in keeping things freeform.”

I notice one uniting character of Sturrock’s work is a sly sense of humour or at least lightness. The image accompanying “Earth Dance” on SoundCloud shows a Golden Retriever walking around carrying a whole pizza in its mouth, and Sturrock’s inclusion of “DJ” and “Exclusive” samples on “Marine Drive” has left a throng of confused Discogs fans wondering why the final version of his song still has these radio tags attached to it.

I ask if humour is incorporated in his work purposefully.  “It’s supposed to be pretty light hearted, also coming from a DIY, punk kind of impulse,” he responds. “There is a sort of self-advertising, cheeky thing going on there for sure. Sometimes being sarcastic or funny is a way to cope with having a really small scene, I guess. We’re kind of being self-depreciating.”

That’s not to say, however, that Sturrock deals in insincerity. When I ask him what kind of things influence his interest in design today, he honestly answers “well, I guess sandwich boards, like ones that a shop would have outside?” I laugh, thinking that he’s joking, until he clarifies with utter seriousness. “Really though, a dollar store aesthetic, just drawing with duct tape – something that’s not considered art at all and just used to deliver a message. I’m into that.” 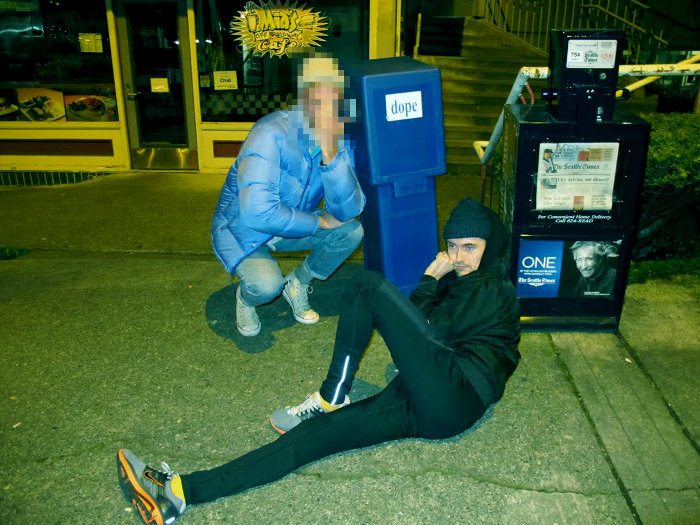 “I think music is just a really cool way to learn about social history,” he continues. “A lot of the attitude of the time that was going on you can see embedded in music-making styles, graphic design styles, and parties.” He makes the point politics and music are similar as they are both made visible by the interaction of people, “they get behind a style and it becomes a cultish following, this magical thing that happens to appeal to their personal way of being.

At the very root of it, politics is something that’s of the people, and it’s like the space that’s created between people.” Is there anything political about what Sturrock is doing though? Hesitant to admit, he says, “when you think of musical styles like techno, it’s almost ‘no style,’ it’s just about dance and rhythm and the beat of the heart and shit.”

What is next for Florist? “Just working on stuff,” he says. “I’ve just been working up a bunch of music – it’s been crazy the reception I’ve got so far, especially considering that they’re relatively old tracks that have been sitting on my SoundCloud for roughly two years.” Suddenly, I hear children’s screeching and laughter coming across the phone line, and I ask where Sturrock is at the minute. He’s planted himself at a park, and kids are running around, soaking up what remains of the day’s sunlight. Bubba at his side.

Looking at Sturrock’s prodigious creativity and his already impressive trajectory throughout 2015, it’s clear that Florist is going places. But right now, it’s also pretty clear that he’s happy right where he is.