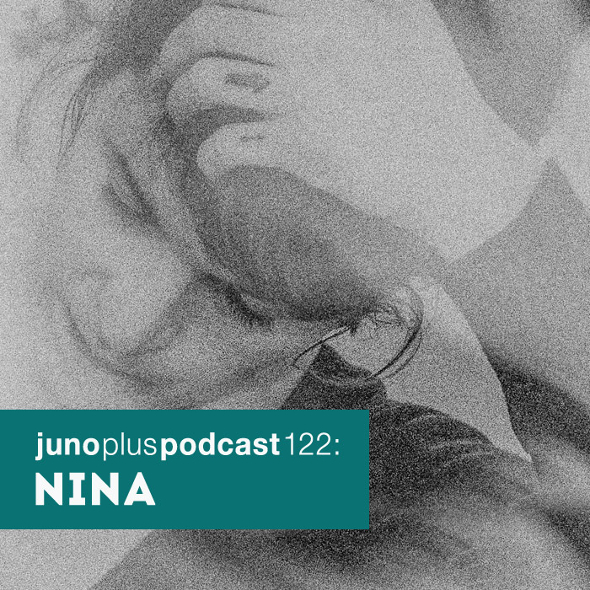 With the one physical release to her name, Nina isn’t an instantly recognisable artist, however the cassette and online mixes the Golden Pudel affiliate has released have earned her some worthy attention. Nina is a Hamburg local and one of the many cogs in the tight-knit community keeping the city’s Golden Pudel club ticking. Her own night took up residence there for more than four years, and artists to play included the likes of DJ Richard, Shapednoise and Mix Mup to Broken 20’s TVO, Samuel Kerridge, and more. Alongside Helena Hauff, Brian Not Brian and Thought Broadcast, Nina also contributed a release to Blackest Ever Black’s cassette sub-label Krokodilo Tapes by delivering Kiran Sande’s offshoot No Observable Effect Concentration in 2014, a mixtape colourfully described as “soundgirl punishments… Equal parts cyberpunk body-horror and real-deal harbour city sorrow.”

Online you’ll find her mixes over at Berceuse Heroique and Berlin Community Radio, among others, however her musical pursuits don’t stop there. With Tobias Duffner, the pair set up their own V I S label earlier in the year by debuting local Hamburg entity SPR which had Juno Plus editor Tony Poland likening the music on EP1 to “Shackleton in a particularly bad mood.” With Nina’s gigging schedule taking off, she’s found herself playing in and around Berlin, to Norbergfestival up in Sweden and Krakow’s Unsound next month, and following a chance encounter at this year’s Fusion Festival we were able to net a vodka-whiskey-fuelled mix from her, shaded not too differently from the sound bombs she delivered Krokodilo Tapes. For more on what Nina’s up to, take a read of the short interview she was happy to provide below.

Hey Nina, thanks for the mix, how is life in Hamburg?

Oh thanks for asking me! Windy Hamburg, I am so much at home here.

How would you explain your involvement with Golden Pudel club, and how are things going there?

Well… There are so many people involved and every single person is important to keep things going. It needs a lot of energy to run a club 365 days and nights a year. I´ve got a lot of respect for Charlotte, Victor and Ralf, it´s just impressive. They let me run a night for more than four years and they weren’t always the most busy, but it’s still something I am thankful for. I learned a lot, not only about music, but nearly every shift at the bar was an experience, it´s not just a club.

What have been some of your highlights at the club this year? There’s been some talk of that show you played with F#X.

F#X, yes. Always surprising! It´s always so good to hear when someone doesn´t just go in one direction. He´s able to absorb and express his music in a very special way. Nikae and I played before and after his set – always big fun with her, we are a very good duo, haha!

Also the night with Rrkrta-Jacek and DJ Richard was pretty amazing. The Senyawa concert, Christoph De Babalon, incredible! I´m sure I forgot some.

Where was this mix recorded and was there an inspiration behind what you’ve delivered?

I was at dinner in a Polish restaurant before and had a few really nice vodkas. Then I went home and thought a nice Islay whisky could be nice… Well, that´s what came out

Your gigging schedule seems to be taking off at the moment. A recent festival you played was Norbergfestival in Sweden, how was it?

Lovely! It feels very special spending three days with a small audience with such a line up. I met and heard DJ Storm!

Tell us a little about your new label V I S.

We are surrounded by so many people making good and interesting music, it just felt like a natural progression for us.

Can you embellish a little more on SPR, the artist who inaugurated V I S with EP1?

SPR isn´t someone you meet in the club often. He prefers staying at home screwing. F#X luckily invited Tobi and I to play at the same party where he played live and it was pretty clear we wanted to do something together.

Is there a story behind the picture of fruit on the sleeve?

Should we be expecting EP2?

We definitely want to release much more SPR stuff!

Do you have plans to put out any more cassettes?

It´s on its way. The second release on V I S will be a tape. The amazing Christoph De Babalon recorded 45 minutes of his own crazy stuff, the other side I mixed a bit. I  am still really happy he decided to join the label, I really love what he is doing.

Finally, are there any local Hamburg artists or DJs you think deserve some attention?

Phew, where to start! The Pudel is full of great musicians, but there is another nest that regularly surprises me. Kraniche Bei Den Elbbruekken, amazing club-not-club where you get to hear people like Scheich in China or Helge Meyer, I always having an eye on them (to name just a few). Maybe it´s this feeling of being unobserved (in Hamburg) why so many people here are doing their thing.