There is no doubt that Marco Bernardi is a multi-tasker, but is there a danger that he spreads his talent too thinly? On paper, this could appear to be the case, with the Scottish producer putting out seven EPs and 12″s last year and already responsible for five records in 2015. However, the reality is markedly different; there is a big difference between the widescreen electro of his Never Ending Similarities record on Harbour City Sorrow from last year and the recent techno-oriented Miracle Sign release as MB, but they both share Bernardi’s skilful, detailed touch and dedication to a decidedly raw sound design. 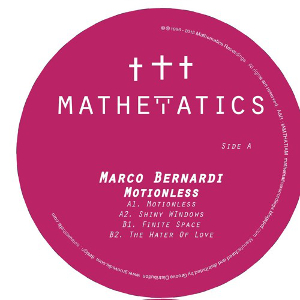 The same can be said of Motionless, his latest release and a debut for Jamal Moss’s Mathematics label. The title track suggests that Mathematics is the perfect home for this project; the rhythm is stripped back and has a hint of distortion, the drums crash discordantly and insistent riffs support an indistinct, pitch bent vocal sample in the finest DBX tradition. “Shiny Windows” goes even farther down this road; it starts with jittery percussion that is soon accompanied by rave stabs, while relentless snares pile up on top of each other. To this concoction, Bernardi adds blasts of black noise that at times test the listener’s limits.

A cynic could argue that he is preaching to the converted by putting out a noise-drenched jack track on Mathematics. To mitigate against any such criticism, there’s “Finite Space”. Dissimilar to anything else on this label and indeed in Bernardi’s own catalogue, it’s led by lithe break beats, a haunted vocal sample and powered by murky, menacing sub-bass.

Following that, he throws a second curveball in the shape of “The Hater of Love”. It has some bearing to the Mathematics brief thanks to its acidic undercurrent, but the muffled vocal and hypnotic pulses form the basis for an individualistic interpretation of electronic disco. It ends a release that shows Bernardi masters any form that he takes an interest in.

A1. Motionless
A2. Shiny Windows
B1. Finite Space
B2. The Hater of Love