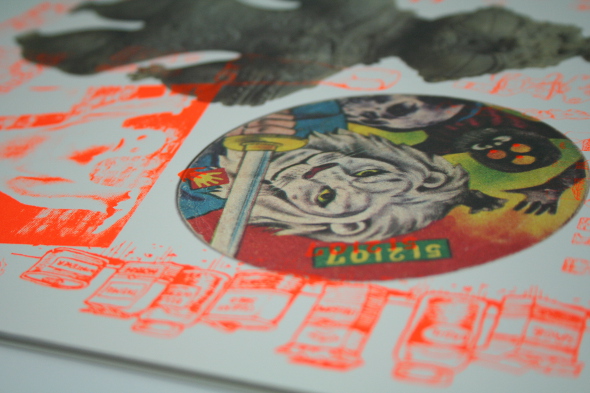 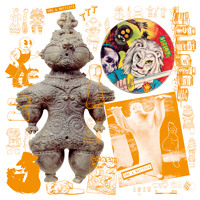 Since emerging from the melee of LiveJam and Relative Records operations that started some five years ago, Italian producer EMG has steadily fortified his identity around assured, aggressive turns on further interconnected labels before branching out this year to Berceuse Heroique. Battista has equally orbited around similar circles from his Berlin base, as well as setting up his own Uaudio label, and now the two have joined forces for an appearance on The Trilogy Tapes that follows on neatly from their respective legacies in rough, gritty outboard clobber laden with distortion, erratic grooves and plenty of disorientating sample triggering. It’s certainly a messy ride, but there in lies the appeal of the extended LiveJam family, from the bloated kick splats to the rasping snares. It’s a good week for TTT aficionados as well, as D.K. and Low Jack’s Slack DJs project debuts on the label with the Glasshouse Mountains 12”.
Listen/buy vinyl

Having previously produced charming results from time spent in Cuba and Kenya, Auntie Flo and Esa are reportedly wrapping up their Highlife World Series project with a stop in Uganda. One suspects on the strength of the results of this trilogy of releases that there may be more to come in the future, but for now you can feast on the results from the two artists engaging with local musicians at the DoaDoa music conference. The mixes by Flo and Esa remain very delicate and faithful to the original source material, simply sliding understated threads of rhythm through the plush instrumentation, while Esa on his own mixes Santuri’s “Min Kula” into a more ranging, simmering cut with slow-building dynamics that should suit an adventurous dancefloor perfectly. Behr rounds the EP off with a feisty mix that feeds some trap stylings into an already eclectic blender and comes off sounding deadly.
Listen/buy vinyl

Somehow Soul Jazz continue to be able to find meaningful mileage in compilations digging back into the legacy of Jamaican music after all these years. This time around, the archival authorities have focused on the legacy of reggae and mento as religious music in line with the Rastafarian faith, reaching back to the mid-’50s. Amongst the artists present you have numerous appearances from Count Ossie and the essential groover “Booma Yeah” by Ras Michael and the Sons Of Negus. Spanning nearly thirty years, the compilation provides a neat snapshot of the evolution of Jamaican music from the more primal, stripped down forms of the fifties through to the more fulsome studio productions of the eighties, while shining a light on the spiritual significance of music from a tiny island with a global reach.
Listen/buy vinyl

Emerging out of the primordial soup of Young Echo comes the pairing of Amos ‘Jabu’ Childs and Sam ‘Neek’ Barrett, conjuring up a new project that follows a similar pattern of retro-fetishistic sound exploration that can be felt in much of the output from the loose fit Bristol collective. After releasing a tape of sounds on No Corner earlier this year, O$VMV$M make the move to vinyl for local institution Idle Hands with their concept intact. Based around obscure source material from old tapes and videos, and production methods that further embrace the crust and splendour of such archaic technologies, Childs and Barrett create a murky sound world that crackles with uneasy atmosphere. At times, such as on “Sad Grime”, the feeling can be incredibly evocative, and at others it can be decidedly oblique, but it’s engaging from start to finish.
Listen/buy vinyl

It’s been a little while since we last got treated to some rising talent worthy of an appearance on the Livity Sound sub-label. The last outing was the stellar turn from Bruce last autumn, and in the mean time the parent label has been kicking back into gear with ace appearances from Pev, Kowton and Hodge. Now though it’s time for something new, and fresh faced Frenchman Simo Cell more than steps up to the occasion with two cuts that follow in that very specific niche that Livity records always do, while simultaneously bringing a personal twist to the table. “Cellar Door” undoubtedly steals the show with its thrilling drop, made all the sweeter by the devastatingly simple synth hook and a keen handle on nail-biting drum play. “Piste Jaune” is no slouch either as it burrows on a more linear path for the heads down spin out moments in the dance.
Listen/buy vinyl

The new label from Chicago’s legendary Smart Bar kicks into gear with a local lad at the controls, and the results are nothing sort of incendiary. Ike Release has been purposefully building up an arsenal of tough jams over the past few years with a close affiliation to Hakim Murphy (as Innerspace Halflife) and Chicago Skyway. Last year he dropped the Noir LP on M>O>S but this marks the first release of 2015 for the machine-motivated artist. The A side jam “Dance Equations” is pure peak time firepower with its strong lead synth hook and catchy vocal lick, but as ever with Ike it’s the booming drums that make the track a special one. “Bijou” pushes the swing into the red for a more angular effect, while “Direct Current” has a softer finish thanks to some plush pad notes and gurgling sound effects.
Listen/buy vinyl

From appearances on Mego and Entr’acte through to regular outings on Alku, the wayward path of Roc Jiménez de Cisneros has been nothing if not unpredictable. Balancing a fine blend of cutting edge and tongue in cheek, Evol has surely become a bastion of how underground, experimental music doesn’t have to take itself too seriously. After contributing to the Diagonal mixtape pack Reel Torque: Volume 7, Cisneros cements the burgeoning relationship with Powell’s label by throwing down this somewhat ludicrous but utterly magnificent exercise in rubbery synth dynamics. “Part 1” of “Flapper That” sets off on a wonky journey through a bouncing acid note that sways between a tangible rhythm, only to be further explored over another ten minutes on the B side. It’s an arch approach that will divide listeners, but its audacity and sheer impact can’t be argued with.
Listen/buy vinyl 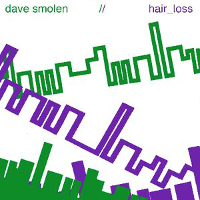 After the widely appreciated Metasplice album brought Bruxist back into focus, the label follows the release up with a timely reissue of the second release on the label from way back in 2011. Dave Smolen had been nipping around on a handful of niche CD-R labels through the noughties until this release seemed to be his last, while Hair_Loss solely appeared on Bruxist with a smattering of releases alongside this one. Split down the middle between the two artists, this album perhaps holds even greater relevance now in light of the widespread celebration of leftfield electronics taking place in so many corners. There is a fiery quality to the deployment of sounds from both producers, where electro gets a serious roughing up on Smolen’s “Stitchglide” and MMM-esque throwdowns fall apart on “Hair Dryer Funk”. Smolen perhaps displays a little more control when getting freaky with his sonics, but every inch of this record more than justifies the repress.
Listen/buy vinyl

October vs Voodoo Down – Las Modelos (Voodoo Down)

Having previously popped up on Voodoo Down with the Unstable Phenomenon 12” back in 2013, Bristolian techno wildcard October is once again making a connection with the New York-Berlin label for a twelve split evenly between the two parties. First up on the A side the label regulars L’estasi Dell’oro, 12×12 and N’conduit join forces collectively as Voodoo Down and drop the forthright techy thumper “Las Modelos”, pinning the action on a solid dub chord shimmer that punches right through the mix. On the flipside October turns out the “12 month dub” of the original, plying a restrained trade that strips the track down to the bone and sews delicate threads of heavily delayed flotsam and jetsam into the fabric for a moody, simmering floor warmer.
Listen/buy vinyl

With a seemingly unstoppable rise to his profile in recent years, Italian synth maestro Alessandro Cortini has gone from hired gun for Nine Inch Nails et al to a solo artist in his own right, releasing a trio of albums on Important Records and the Sonno LP for Hospital Productions last year. He now returns to Dominick Fernow’s label with a new collection of works that affirm his penchant for the eerie and atmospheric, largely avoiding beats in favour of engrossing layers of synths plotted on courses through minor chord scales and draped in careful processing. Despite the apparent murkiness of the mood on Risveglio, this is a decidedly musical listening experience that adds yet more credence to the sterling reputation Cortini is carving for himself.
Listen/buy vinyl