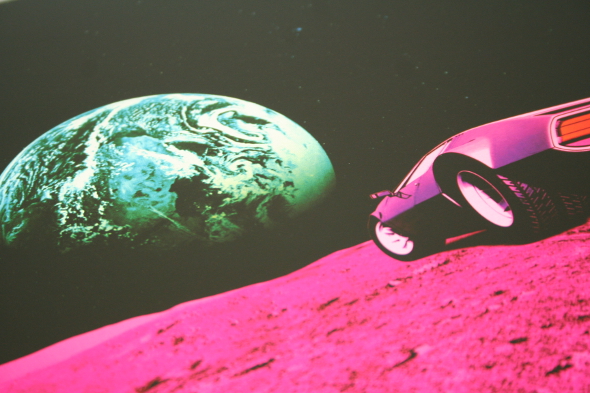 Dutch label Bordello A Parigi moves into the album space with the release of Primo Contatto. The work of G-Machine, aka Italian producer Giovanni Damico, the album cover gives an indication of what kind of music to expect. Featuring a sports car reminiscent of the ill-fated Delorean models parked on the surface of a pink planet facing the earth, it paints a particularly garish but tongue in cheek vision of that very ‘80s obsession, futurism. The music that influences the album is in a similar mould and Damico mines the electro funk and Italo Disco of that period; reimagined for modern audiences, it now has a charmingly retro feel. 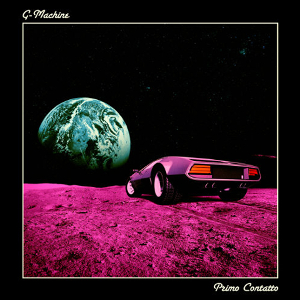 The electro influences are most notable on “Body On The Ground” and “Contact”. Jan Hammer-style drums, emasculated vocoder vocals and breathy melodies prevail on the former while the latter is more direct as 808s roll in over a rough bassline. “Transmission” could easily pass for the music to accompany a stake out scene in a ‘80s cop movie, with the rubbery bass and woozy keys soundtracking the moment when the hero spots the love interest fraternising with one of the bad guys.

Damico isn’t content to remain on an electro tip however; “It’s A Shame” is a teased out disco groove, its mid-tempo pulses housing more floaty vocoder vocals, while “Flying Objects” starts with an innocent vocal narrative about outer space before leading the listener into a disco workout underpinned by tough claps and robust drums. The album goes off the boil somewhat on “iPhunk”, where Damico unconvincingly tries his hand at Metro Area/Bangkok Impact-style electronic disco and ends up sounding contrived, but it’s only a minor digression.

“In My Arms” is a far more impressive interpretation of that sound, its off-centre rhythm, featuring warbling synths, crashing percussion and infectious vocoder work, while the album ends amid police sirens and slap bass on “Boogie Down”. Bordello A Parigi’s move into album projects is to be welcomed and while Primo Contatto isn’t typical of the label’s Italo-inspired sound, it is still an over the top and hugely enjoyable retro collection.