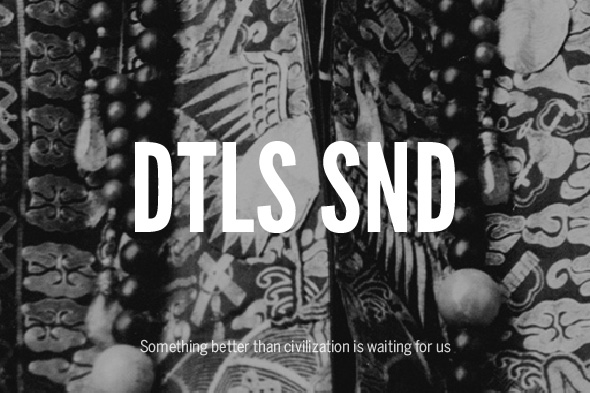 The ominous techno label makes the first signings outside of their inner circle.

So far the work of Giuseppe Magistro and Matteo Fabbri has manifested in a label with a consistent aesthetic in the murkier depths of contemporary techno. Either with Magistro’s solo project A Hand or working together as Details, the pair have built up a style that has afforded their five releases on Details Sound an ear-snagging quality that reaches beyond the glut of dark side techno operators. This is largely down to their instinct for textures and tones with a little more intrigue than simple functionality and/or brutality, with the last release by A Hand moving away from the dancefloor and plunging into grim ambience of a high calibre.

Now Details Sound is preparing to widen its reach with two new signings from outside the monochrome cult they call home. First up is M//R, an artist with a dualistic past who hails from Philadelphia. On one hand the M//R material released thus far on Great Circles 12″ Gathering Response Data has been loud and lairy techno with an outboard sensibility, while alternative project Werner Williams is a soul concern that has surfaced on a split 7” for Universal Cave. This new release for Details Sound is a four track EP entitled No Tag No Food.

M//R will be swiftly followed up by a single from Portland, Oregon duo ASSS. The derriere-dallying pair is Alexander Smith and Sean Sumler, and they have been spreading their wares sporadically over the past six years on tapes and 12”s for Haunted Air, Clan Destine and Hobo Cult amongst others. We have a full preview of abrasive wall shaker “102” which will be appearing on the four-strong 100 EP, available to check in the SoundCloud player below. Both records are slated for a September release, with M//R likely to land just in front of ASSS due to the sequential catalogue numbers.

Details Sound will release No Tag No Food by M//R and 100 EP by Asss in September.