HVL – Away From Everything We Know 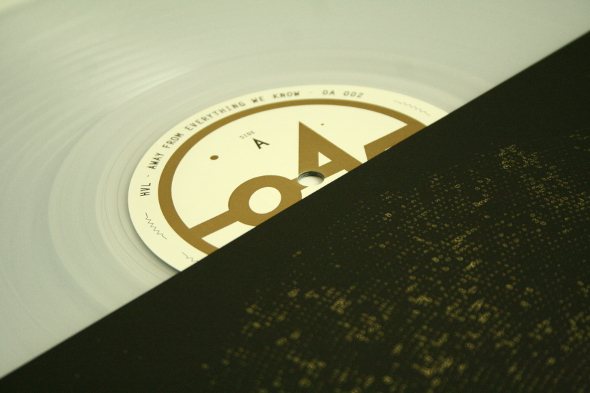 Organic Analogue bravely founded itself under the banner of retro-futurism in 2013, but amongst the dense web of nostalgic dance-throwbacks of that year its first release, Jeremiah R’s The New Wave, felt a glossier solution to pushing and pulling between old and new. His classic and innocent electro sound seems engineered from particularly high quality parts and tonally remains a wide-eyed and remarkably easy to swallow selection of music. OA promised a quick follow-up, but for one reason or another went dark for a year instead.

In many ways HVL works in the same manner as Jeremiah R, an up-and-comer with the studio mastery to allow for lucid, three dimensional takes on dance music. He’s quietly been making a name for himself in the last year, and seems centred around a loose collective of eastern European or Russian producers (he’s Georgian) like Unbroken Dub, Gost Zvuk, Shine Grooves or Udacha that have been making appreciably exploratory, sometimes techy, forms of minimal, dub techno or house music. Fans are often more likely to leave a Discogs review than a Resident Advisor comment, and a lot of the good stuff is still buried in crossed SoundCloud feeds with Cyrillic tags, but labels like Rawax, Rough House Rosie (and Organic Analogue!) are helping bring the music across to audiences in Berlin and the UK.

Away From Everything We Know neatly showcases HVL’s talent for untethering a rhythm and floating it in great sunken spaces without over-smothering in reverb and losing intensity. His last release Lucky Star of High Minded had a touch of the disco-loop as it swung low, but here he moves back toward a sparser and proportionate dub techno toolkit. Tracks unfold; chords like particle effects, drums sharply-tuned to sit above rather than within the mix, an interwoven vocal, and VERY sensuous bass.

There’s more than a little in the way of comparison to Sven Weismann’s style, particularly his ongoing Joeum series, and there’s the same bliss/bleurgh double-edging where the music is consistently really, really excellent – but a combination of the deepest of deep house and production wizardry having ironed all the creases out might make this a touch too tasteful for some. It’s hard to argue for some kind of progressive aspect in these instances outside of the technical prowess, but then I don’t think that was really ever HVL or Organic Analogue’s intention. And the music is just so downright enjoyable.

B-side track “Cygus Loop” is an interesting curveball, the title suggesting some Basic Channel finery but the track itself coming across like an homage to SND by use of some similar pattern phrasing and stylistic coincidence. Where the drums and ambience had felt intentionally divorced on other tracks, now every component feels its own separate entity – iterating and colliding in a way that feels so Mark Fell-specific. Scientific.

OA chose to close out Jeremiah R’s record with a remix (from electro titan Gerald Donald!), and take the same approach for Away From Everything We Know – calling upon the prolific Gifted & Blessed as The Reflektor. GB amps up the dubwise quality of the title track and condenses it, pressuring the track rather than allowing energy to dissipate too far and, perhaps necessarily, adding some little freeness and restlessness to the piece.