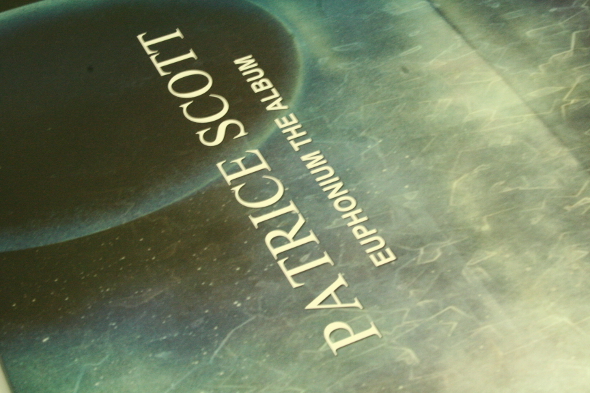 It’s no surprise or coincidence that there is a large, unidentified planet on the cover of Patrice Scott’s debut album. While the euphonium is a brass instrument –  albeit one that comes from ‘sweet-voiced’ in Greek –  the veteran producer is following the well-documented Detroit obsession with exploring outer space and the cosmos. Scott’s small but flawless catalogue of work on his Sistrum label certainly sits at house music’s most esoteric end, in sharp contrast to the gritty, steely swing of Omar S. As an interviewee, he exudes the same kind of distracted aura as Juan Atkins, like all he wants to do is stare out the window in anticipation of the first encounter.

It’s no surprise then that Euphonium is as spacey as his back catalogue. “A Detroit State of Mind” starts with cinematic ambience, warm and melancholic synths gushing out humanity over clipped beats. “Distr5th” looks back to the city’s electro past for its funk bass and the clatter of early Carl Craig for its nail-in-the-wall hi hats, while “Music Therapy” is delivered with a growling groove that is equal parts Model 500 and Aril Brikha. Nonetheless. Scott’s love of melody is never far away and he adorns the tight arrangement with gorgeous keys.

“Escapism” and “Hysteria” see him up the ante and veer into techno territory. In particular the tough percussion on the former and the acid spray on the latter show that Scott does on occasion, like to show his teeth. Straight after however, he drops “Euphonium (E.T.A. Dub)”, the kind of track that Sistrum’s mighty reputation is built on. Dubbed out drums, insistent percussion and relentless claps frame melodic flights of fancy, jazz-inspired solos and woozy effects.

By the time he reaches “They Walk The Earth”, Scott has left this world and is entering the same kind of deep space realm he documented on 2008 12″ The Evolutions. The one-note robotic bass and machine gun claps act as a mere starting point for a tapestry of atmospheric synth melodies that push his sound farther than it has gone before. Like so many Detroit artists who have gone before him, Euphonium sees Scott venture into deep space.