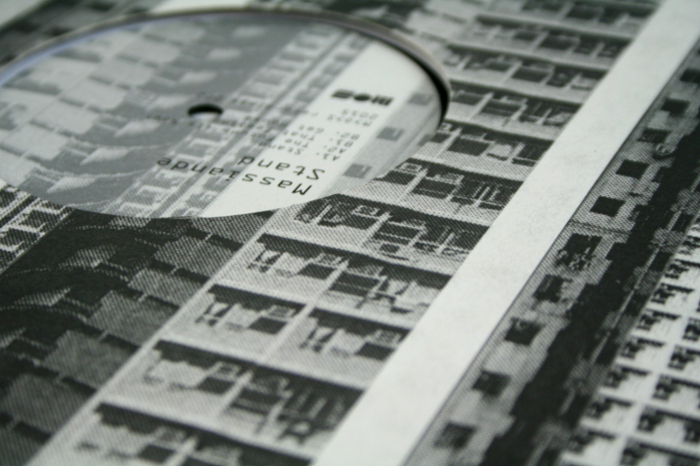 The absurdists rule this time around as records from Rezzett, Herva, Morgan Buckley, Altar Of Flies and more feature.

March seemed to bring out the madness with several records notable for both the absurdist sonics and artwork that adorned them, and thus one specific theme covers the majority of records featured in this month’s Best Record Sleeves column. Where better to start than Rezzett, the behooded duo whose music challenges the very fabric of your speaker cones in a manner few other artists can replicate. As with previous TTT 12″s from Rezzett, Goodness is every bit as memorable for the artwork by Will Bankhead which depicts in golden tones some demonic entity sporting a hairstyle straight out of English football circa ’76. Will Bankhead rarely discusses his methods or sources for selecting and designing the artwork for The Trilogy Tapes, so it’s quite unwise to entertain such speculation ourselves, yet the strange mythological monstrosities that grace the sleeves do really add to the mysticism behind Rezzett.

Another producer beloved at Juno Plus for his most singular and unpredictable style is emergent Italian Herva whose All City debut How To Mind Your Own came wrapped in some delightful out there artwork that fully channelled his nonsensical approach. It’s little surprise to discover a close friend of Herva was responsible for the artwork in Florence based multi disciplinarian Jonathan Tegelaars.

Rising Rathmines man Morgan Buckley served up one of our favourite 12″s for Rush Hour’s No ‘Label’ last year and he returned to the operation triumphantly with a friend in tow on the excellent Shplitting The Shtones. In addition to the six tracks from Buckley and Olmo ‘OD’ Devin, Shplitting The Shtones also introduced the poetic verses of the unheralded Lee Eell, and most pertinently to this column, the best artwork yet from Johann Kauth. The artist has been responsible for the visual aspect of plenty of previous Rush Hour related releases but the full colour sleeve for Shplitting The Shtones vibrantly reflects the multiplicity of ideas contained within.

Joachim Nordwall’s iDEAL Recordings occupies its own place in the world of mind-warping power sonics and is not really one of those labels you should wander through blindly. Even so I couldn’t help but feel a tinge of curiosity at their latest offering from Mattias Gustafsson’s Altar Of Flies project due to the cover art, despite the lack of prior familiarity with the Swedish artist. Spend some time with the hellish sounds contained within Altar Of Flies and you’ll probably find the foreboding stock photography from Åke Gustafsson (related?) that adorns the album all too appropriate. For this writer the whole album gives off a vibe all too close to the survival horror video games of my youth.

And so we come to the odd one out, in this case the one record that wasn’t so strange looking or sounding but impressive nonetheless. If you have invested any time in M>O>S Recordings, you will understand how closely the Dutch label’s identity is linked to cities and the urban environment. This is naturally an extension of founder Steven ‘Aroy Dee’ Brunsmann’s professional life as an architect and it’s informed the visual approach of M>O>S Recordings from the off. The label welcomed Chilean artist Massiande into the fold this month with Stand, a 12″ blessed by some understated screen printed imagery of high rise structures that is truly eye catching.