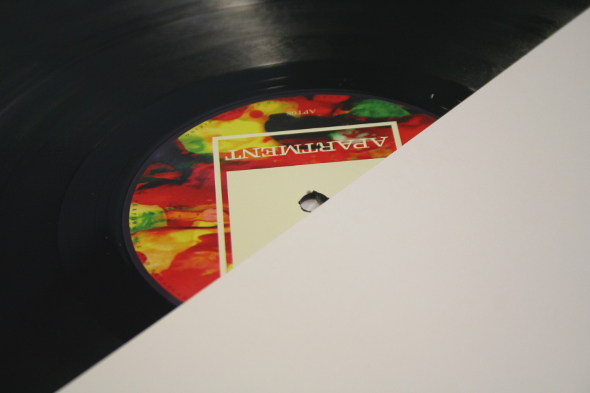 “This one is for The Tree, Baskerville Hall. RIP,” reads the B side run out groove of the newest installment in the Apartment Records story. It’s a nod to a Lebanese Cedar that suffered at the hands of a storm at the Welsh venue where the Freerotation festival is held every year, leaving attendees pining (no pun intended) for a much loved arboreal presence at the intimate event. Look no further than “Cedar Of Lebanon/Spongy Tree” by The High On Wye Quintet for more proof of how much people loved that gosh darned tree. The point is, this record seems positively birthed from that particular gathering, with Steven Legget (who makes his debut appearance here) a regular attendee alongside Apartment boss man Kenny Hanlon, while Mark Hand performed his remix of “Aquarius” during a live set on the Saturday afternoon. 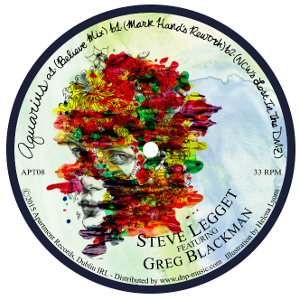 The dubby tones of the original version seem to rise out of the very amalgamation of styles that embody the festival as well, from the unconventional pulse of the chords to the looming pump of the low-end and so on to the genuinely affecting soul of Greg Blackman’s vocal delivery. Blackman, much like Legget, has not had much time in the spotlight, although he paired up with DJ Vadim for the Hartley And Wolfe project on BBE in 2013. Whatever the case, his is a powerful voice drenched in a very real soul, and it sits amidst the expressive quirks and wobbles of dubwise processing as a perfect bridge between the organic and the electronic, and in the flux an arresting slice of neo-soul is born.

Mark Hand meanwhile has existed in an equally low-key corner of electronic music, with roots in acid techno and early trance in the ‘90s that sit at odds with the smooth, warming tones of his contemporary house confections. His live sets capitalize on the unparalleled cradle of live Rhodes, and those inimitable keys worm their way into this tender reworking of Legget’s original. It’s just the kind of seductive house music that cuts through tepid ‘deep’ connotations to reach a truly meaningful emotional space on a par with the most moving of vintage Moodymann tracks (think something as heart-melting as “Recitfy”).

By way of contrast, NCW brings a more upfront brand of house music to his “Lost In The DMZ Remix”. The Apartment regular has delivered some daring and ultra-slow work to the label before, but on this occasion opts for a considered but bumping outboard house affair with plenty of swing and a more apparent dancefloor outlook compared to the lounge-lizard styles of the other two versions. It’s a fine effort, if a little less spellbinding as a listen, which is understandable given the greater focus on functionality. The NCW version certainly does nothing to break the soulful spell the record has already cast. Considering the communal origins of the music, it’s hardly surprising that there is an air of fellowship about the record, in the tone of the lyrics and the sensitivity of the music alike. Whether it is the last tribute to be paid to one particularly special tree remains to be seen, but it’s a thoroughly fitting one nonetheless.