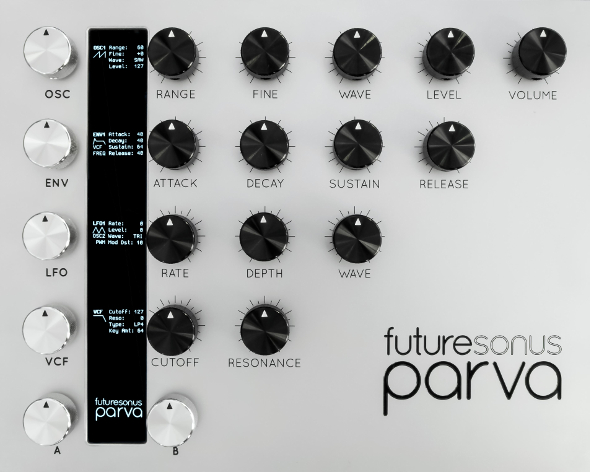 The polyphonic synthesiser will be the inaugural product from the fresh-faced Texan manufacturer.

Established in 2014, Futuresonus is a new synthesizer manufacturer based out of Austin, Texas, specialising in products combing analogue and digital technologies to give musicians what they describe as “tone and convenience”. Their first product is the Parva, an eight voice polyphonic synthesizer boasting a 100 per cent analogue signal path, and Futuresonus founder, Brad Ferguson, explains, “I designed Parva from the ground up with the intention of producing a completely new synth while still maintaining the character of the classics from the ‘70s and ‘80s.” As the Futuresonus website writes, the Parva is reportedly the first analogue synthesizer to feature a USB Master port, allowing users to connect USB MIDI keyboards or controllers to the synth, directly, without the need of a computer or DAW.

Each aluminium unit is hand-assembled in Austin, and although digital signal processing is absent from the Parva, its digital controls mean patches can be saved and recalled, while parameters are also adjustable using MIDI. Each of the Parva’s eight voices feature three digitally-controlled analogue oscillators, capable of producing sawtooth, triangle, and pulse width waveforms, while LFOs and envelopes can be routed to more than 40 destinations of its modulation matrix. The Parva arrives at a recommended retail price of $1000, with the suggestion an expandable monophonic version is also on the way for approximately $500. For a preview of what the Parva sounds like check out the YouTube video below.

An official release date has not yet been disclosed but to be notified when pre-orders take place visit Futuresonus.