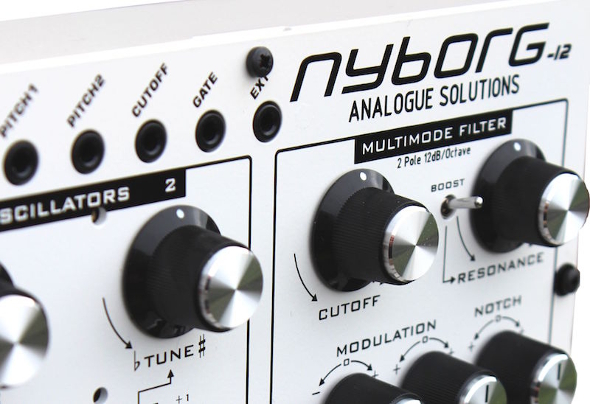 Analogue Solutions already have a series of high end synthesizers behind them like the sequencer and keyboard affixedÂ Leipzig SK and the Vostok Deluxe suitcase modular. Their fiendishly expensive status has kept these synthesizers out of reach for the budget-conscious music making majority, but with the new Nyborg 12, it looks like Analogue Solutions are offering their boutique quality to a wider audience.

This monophonic piece of kit is built on two VCOs, with the choice of octaves tuneable by a semi-tone. There is a mixer section that doubles as a wave selector with the choice of saw and square waves, with controls to modify the shape of the square wave, and, in addition, there is a sub generator that allows you to dial in any amount of octave below VCO one. The sub generator also doubles as a mixer for white noise generation which means you can choose between sub-bass or noise, but not both. Still, the noise generator is a function not found on the Oberheim SEM that this synth is based.

There are two envelope generators that allow you to mould the sound by means of attack, decay (doubling as release) and sustain. The first envelope controls the multi-mode filter while the second is dedicated to shaping the VCOs. Triggering the sound is done via the VCA or amp section, with knobs for both volume and choice of modes. So, for example, choosing the mode for envelope two allows you to trigger the sound as shaped by the AD/RS. Then there is a cycle mode that loops continuously through the AD/RS at the tempo of the LFO. Gate mode allows a simple note on/off, and bypass mode plays a single continuous tone. 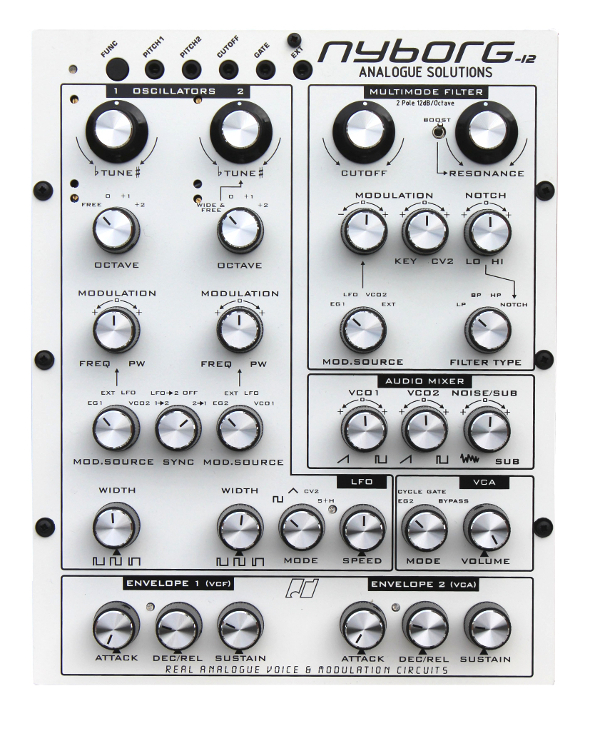 The filter is where the real soul of this synth comes from; itâ€™s a two-pole multi-mode filter that cuts off at a rate of 12dB per octave outside the band pass, hence the Nyborg 12 name. This filter includes low pass, high pass, band pass and notch types with added control over the high or low aspect of the notch filter, and the LFO’s got plenty of modulation options to help whet your creative buds.

The Nyborg 12 comes housed in a beautifully smart steel and aluminium box with a sloping control panel that stands tall on your desktop, making the whole unit look as though it was borrowed from the set of Doctor Who. The retro-look continues in the design of the knobs, with aluminium caps sporting a smart spun finish, and naturally itâ€™s an all-analogue interior.

Analogue Solutions have made a point of emphasising the quality of the components they use and itâ€™s clear thereâ€™s been no compromise in it construction, once again. Creamy-smooth bass sounds, snappy percussive filters, piercing leads, big gongs and sound effects are all possible on this synth. And despite the pride in which Analogue Solutions takes in creating their solid machines, there is one digital element they can be forgiven for including, and it comes in the form of the 16 bit MIDI/CV conversion. 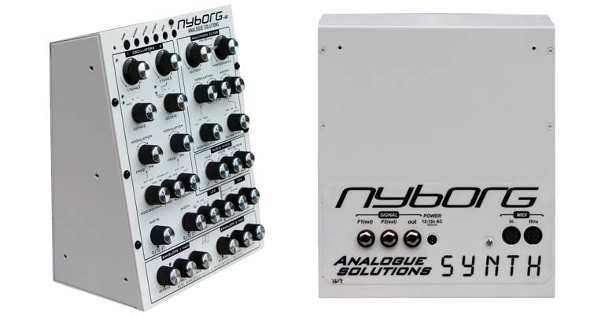 As the Rolls Royce of the synth world, Analogue Solutionsâ€™s attention to detail and build quality is impressive, right down to the knobs that are sealed against dust contamination. In terms of competition, the Nyborg 12 goes head to head with Studio Electronicsâ€™s Boomstar range, in particular the Boomstar SEM as both are modelled on the Oberheim SEM.

The Nyborg 12 is perhaps slightly more complex than your average analogue synth and getting the most out of the syncing and modulation sections does require some experience of plugging and programming. The one function per control, however, does alleviate some of the technical pressure if you are completely new to analogue contraptions, but the Nyborg 12 is a product aimed at users already at grips with the basics of mechanical music making. If youâ€™re looking for an instrument that has all the qualities of the good old â€˜analogue daysâ€™, that will take your productions into the future, the Nyborg has landed.