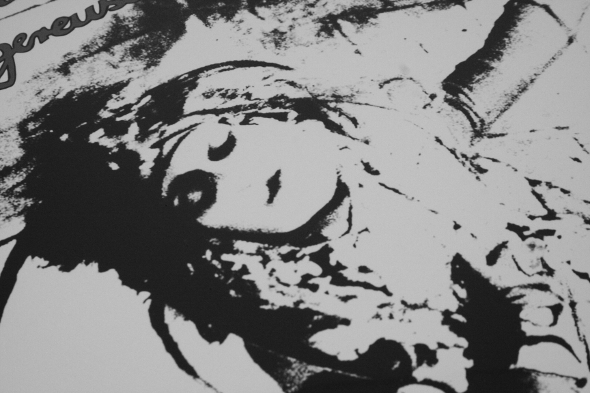 In the long and winding corridors of the archive there are things which we should listen to because they’ve been forgotten and things we should listen to precisely because they haven’t. Liaisons Dangereuses is one of those projects which has stayed with us, their crazed, infanto-weird battlecry “Los Niños del Parque” paving the dancefloors of any kind of underground clubbing experience ever since its release in 1981. What is it about that track that keeps generating, generation upon generation? What’s so special about it?

Easily classifiable as one of these morsels of Neue Deutsche Welle which make it into a certain sub-mainstream by acquiring a bit of a novelty coating, “Los Niños del Parque” is in fact a mere glimpse into the range and mastery of Liaisons Dangereuses, and that’s why it keeps going (which, in fact, is often the case). So although this reissue of the band’s only album by Swiss mini-indie Soulsheriff isn’t the first it is, nevertheless, welcome and in fact essential. It’s essential that as we keep listening to the hits we also keep considering the albums, which give us the hinterland to why things become special, to why they survive.

Liaisons Dangereuses might look like a weird one-off, but the band’s an all-star cast encrusted like a diamond in the Düsseldorf scene. It’s the result of the love between electro-wizard Chrislo Haas (D.A.F, Der Plan) and unorthodox sound engineer Beate Bartel (Mania D., Einstürzende Neubauten) and the evolution of their wildly imaginative, 10-minute-tape-only project CHBB, which supplies Liaisons Dangereuses with their fierce experimental vein. Add to this the intensely charismatic Krishna Goineau, who had been working in Barcelona with the eccentric and really quite dark Xeerox (whose work was reissued recently on Anòmia), and whose handsome but completely weird vocals bring in that glorious demented surrealism typical of the Spanish synth-scene, and you have this totally off-centre, investigative little gem seen by many as a seed of so much that was still to come.

Ridiculously ahead of its time, the record seems to foreshadow New Beat, EBM, late ‘80s electro-industrial and even, some say, certain shades of IDM and minimal techno. The record is a many-headed beast – probably because, like a proper avant-garde thing, it was too occupied inventing the future to figure out a particular sound or style. The curtain opens on the velvety black of “Mystère Dans le Brouillard”, funereally Goth in concept but executed by way of a tinny cold-synth sound which presages the much more intricate and irregular atmospheres lurking just beyond the threshold. “Etre Assis Ou Danser” – jumpy, tense, intense little poem about a boy who can’t stop dancing, an obsessive beat pierced at times by an equally deranged saxophone – and the theatrically slow, majestically sinister soundscape of “Apéritif De La Mort” dominate the feel of the first side of the record.

Embedded within irregular pulses and cheeky nihilist poetry, “Los Niños del Parque” makes more sense as another gem in a cunningly, expertly assembled scenario able to weave together different sensibilities: sleazy, romantic and mischievous at the same time. Part one closes on a straight-laced synth-line pricked all along with horror-film moments of screams and creaks in “Kess Kill Fé Show”. As Goineau’s voice disintegrates into white noise, Bartel’s quick, short cries drenched in echo – a trademark of the entire work – continue to haunt like some sort of banshee-robot.

The show continues to offer similar concentrated little masterpieces as the album develops. “Peut Être … Pas” and “El Macho y la Nena” stage an aggressive, glitchy compulsiveness but all the rhythms get harder, more jagged, more broken; and the voices get stranger, and the palette of sounds more mechanical, and the record gets more and more interesting as an experiment in raw electronics which nonetheless manages to maintain something filmic, something ghosted. “Dupont”, a personal favourite, attests wonderfully to this balance:; high-pitched whining sounds ring and click and tones quiver like a musical toy running out of battery, yet a story is being told, some mysterious story in the fog kept in place by a severe, dry, repetitive beat. The record closes on “Liaisons Dangereuses”, which really synthesises everything the record stands for – just over a minute long, it ends and I swear you don’t know what happened.

Soulsheriff’s reissue gives us a chance to remember that Liaisons Dangereuses ‘stuck’ by way of intensity and depth, not out of sheer weirdness. It’s exactly as handsome Goineau recites: the kids in the park are lucky, but they’re not innocent. They’ll smoke cigarettes and play with bombs.