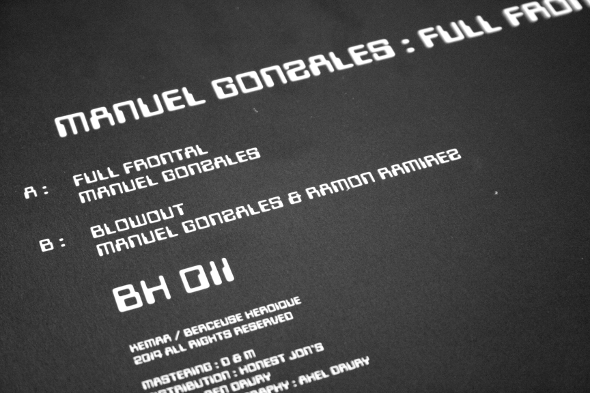 Listening to this latest release on Berceuse Heroique from Manuel Gonzales brings to mind the unfortunate passing of LFO producer Mark Bell earlier this year. Not in the sense that the producer or the label want to cash in on the death of Bell, but rather that it serves as a reminder of the period in the early to mid-90s, when Bell’s records, along with the music of Claude Young and Stacey Pullen, were mapping out new possibilities for the form. In particular, Bell’s Lofthouse double pack release as Clark on Planet E was a defining moment. It effortlessly combined Bell’s bleep background with the noisenik aesthetic of Landstrumm and the robotic angularity of a Detroit new waver (at the time) like Young. 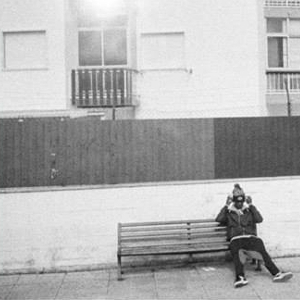 In some ways, Gonzalez is the creative successor of that generation of Detroit techno, an artist who is not afraid to mess about with ghetto, abstract noise and slamming rhythms over the course of one record. “Full Frontal” is redolent of that ’90s sound; it’s much faster than the current crop of techno and its frenetic, wiry rhythm is underscored by a growling, raucous bass. Despite this, the most captivating part of the track is the interplay between the sing-song-like sonic blips and bleeps and the churning, malevolent filter that churns beneath the surface, like a great white shark skimming the outer reaches of a surfing area for prey.

“Blow Out,” a collaboration between Gonzales and Ramon Ramirez, is a much slower affair and doesn’t contain the same kind of seat of your pants experimentation. However, the robust drums and tough claps set the scene for a spacious house groove that veers unexpectedly in its second half into expansive, dreamy synths. In a world of identikit dance floor tracks, Full Frontal boasts the kind of flair and willingness to experiment that defined Mark Bell and that period when he turned his focus to techno. For that reason, it’s one of the most impressive eulogies to the former LFO member.

A. Full Frontal
B. Blowout