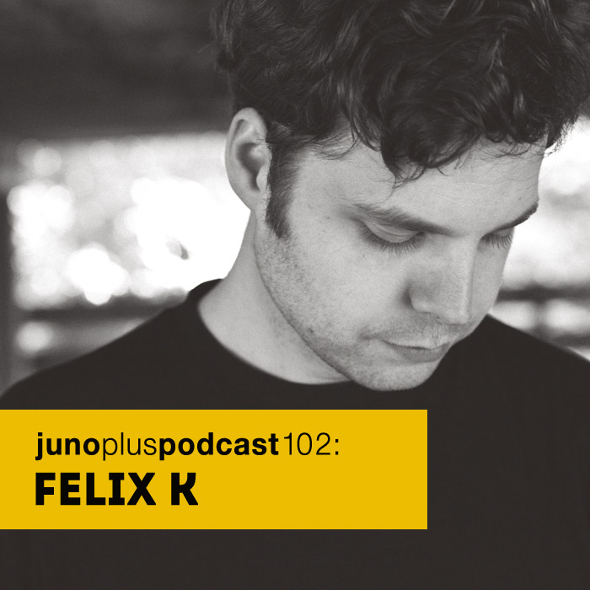 Felix K is someone we’ve hoped to have on the Juno Plus podcast series for longer than we can remember. It’s been some 12 months since we first put the call out to Berlin where he and his Hidden Hawaii compound reside and after a long wait, to the point where we weren’t sure a mix from the reclusive producer would ever arrive, two emails one morning landed in our inbox. The first was a WeTransfer link with a file called “Zusammenstellung von Musikwerken In Zwei Teilen – by Felix K.mp3”, while the other was a direct message from him reading, “What do you think about this mix for Juno Plus? I had a day off.”

Safe to say receiving a two-hour podcast of dubby, half-time and deep 4/4 sounds from Felix K was a ‘feeling happy’ moment for our editorial and we couldn’t be more pleased with what we were served. Felix K is the owner and operator of Hidden Hawaii, a label affiliated with a spectral non-scene of German drum and bass cross-pollinating its way into techno. Hidden Hawaii has released the majority of Felix K’s music to that of The Weevil Neighbourhood’s Martin Heinze, aka Martsman, to other illusory artists like DB1, Double O, and in 2012, an experimentally inclined AnD. Attached to Felix K’s Hidden Hawaii HQ is a soft-peddled network of subsidiary labels secreted by the smokescreen nature of limited pressing, white label vinyl culture. Across these undercover operations you’ll find artists like Legowelt putting out records next to covert aliases like SKV18, Late Echo Express and //no, to Subminimal, Scale and Arrrgh°.

Elusive Felix K may be, but he’s not the cagey producer you might expect and the Berliner was happy to answer the questions we threw his way; certifying rumours of a future release on Blackest Ever Black to confirming more Hidden Hawaii material in 2015. In the words below you’ll also find love for the Leipzig scene, insight into this year’s Nautil Series and an explanation of his podcast, which is an ear-catching example of Felix K’s genre-bridging capabilities.

Hi Felix, thanks for the mix. You said in an email you recorded it on a day off. What sort of mood were you in when you mixed it?

It was a good day. I enjoy the days where I can do music. The Juno Plus podcast was something I wanted to do for a while. One of the reasons to do it was to present the Nautil Series that came out earlier this year. The first part of the podcast is built around the Nautil Series, basically. The Nautil Series was kind of a retrospective view on Hidden Hawaii Digital, how we started it. At that time we felt the need for reduction, because music from the drum and bass genre pointed at several dead ends. While the mainstream seemed to be focussing on reproducing the same but louder version of different sub genre blueprints, we headed back the elements that made electronic music interesting to us.

It led us to a more universal thing than just the essence of drum and bass. For us it was the warmth of dub chords combined with warm bass sounds. The Nautil Series was meant to pick up that notion again. And so was the podcast. A second reason was to present some new and unreleased Hidden Hawaii tracks by different artists and some of my own music. A third reason to do the Juno Plus mix was to do a transition from 170 bpm to 130 bpm. The transition moment cuts the mix session into two parts. The second part is more focussed on what I usually do when I play as a DJ: techno.

You released some techno for Dystopian this year. Are you still involved with that label?

We are friends and they are taking care of all my bookings as Felix K. Besides that I plan on doing a couple of techno tunes for the Dystopian label. For me as a producer 4/4 techno is still new territory. It is not an easy enterprise to finish tracks, because it’s really not easy to do interesting techno. On the other hand Dystopian have built their own sound and already people have expectations of the label I am not sure I’ll always be able to fit.

Anyway, at the moment they’ve just released a compilation with most of the artists from their roster. You’ll find core members like Rødhåd, Alex.Do, Recondite and Don Williams next to some new guys like Vril, Ø [Phase] and Distant Echoes. If you ask me the release is a dance floor smasher.

We recently spoke to Martin Heinze of The Weevil Neighbourhood and he told us about the Leipzig drum and bass scene, and their general leftfield approach to music. Has that city’s music influenced you?

Leipzig seems to produce a steady, creative flow. My assumption is not limited to electronic music. For example two of my favourite painter-sculptors are from Leipzig: Max Klinger and Neo Rauch. Both are known for utilizing and combining different materials and techniques, and I enjoy their individual approaches to expressing unique ideas. More or less the same refers to some of my favourite electronic music artists.

One that I’ve followed for a long time is Kassem Mosse. He really sums up the Leipzig phenomenon for me. He is combining unique sounds and rhythms, showing an absence of mainstream influences and puts a good DIY feel to his releases. The same appears in LXC and his Alphacut label, among other creative people. I don’t know why, but it seems that Leipzig is a good place for artists with a distinctive vision.

How are you feeling about the state of drum and bass at the moment? Is the more experimental side of the genre expanding?

To be honest, I don’t know. The music that I am interested in is not restricted to genre borders so much. I am interested in individuality instead of reproduced loudness, tempo, rhythm structure, patterns, or any other sound conformism. That may be a reason why it is hard for me to keep up with drum and bass related news. Things change and that is totally OK. I am not part of it alone anymore. To give a positive answer at least, there are a few really good drum and bass related artists out there that everybody should check out now.

To name one of them, Ena is an artist from Japan. He is important. He just did his second or third album called Binaural. It was released on the Samurai Horo label. Ena is unchallengeably good on so many levels. He developed a distinctive vision of electronic music and he reached a level that will stay unrivalled for a long time. He did his homework and mastered his art. Another highlight is Hidden Hawaii’s DB1. He’s working on some very interesting projects at the moment that are blowing my mind. I will be happy if at least one fourth of it will be finished some day.

Musically speaking, have you enjoyed 2014, and what does 2015 hold for Felix K and Hidden Hawaii?

2014 was great for me as a record buyer in terms of the amount of superior releases. It was terrible for the small amount I could actually afford. Atonal Festival in Berlin was great. I went there as a guest and met a lot of great artists. Hidden Hawaii finished the Sub Series in 2014. We went on with the Gilga Series and put out the Nautil Series. 2015 will hopefully be great as well.

For me as a producer expect a 12” on Blackest Ever Black and 12” on Hidden Hawaii. There are also some remixes I did, one is for an artist called Carrier One on Samurai Horo and the other one will be for Teersom on his label Basement Grey which will come out very soon. Besides that I will come up with different releases under known and unknown aliases in the near future. For my label Hidden Hawaii there is a bunch of upcoming records too. Expect more than two hours of music within the next six months. Next to the Felix K 12”s there will be releases by DB1, Late Echo Express and others.

So the rumours about a Blackest Ever Black release are true?

The rumours are true. The sound will be a bit different from some other stuff I’ve done, yes. The main focus is more on narrative aspects, but you’ll find some typical Felix K elements in there too.

Should we expect any more Gilga LPs?