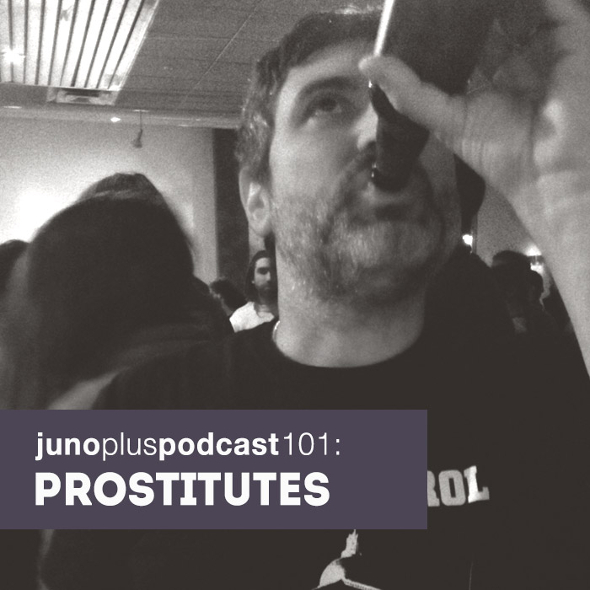 It’s no surprise that James Donadio’s Prostitutes project has recently found a home from home in the Diagonal label overseen by Oscar Powell and Jaime Williams – the Cleveland-based artist has been exploring a similar collision of primitive rhythms and industrial sonics since the project commenced in 2011. The Crushed Interior album for Brad Rose’s Digitalis Recordings issued last year seemed like a breakthrough moment for Donadio’s current creative concern, and a succession of Prostitutes records have subsequently popped up in some interesting places.

Last year’s Shatter And Lose 10″ debut for Diagonal was followed by a pair of Prostitutes records for Avian offshoot Mira, the Petit Cochon album for John Elliott’s Spectrum Spools label and Nouveauree, by far the most bracing record issued on Night School Records. This week saw Donadio return to Diagonal with Ecstasy, Crashing Beats and Fantasy, a record the artist himself states is “comprised of misguided and delusional ideas.” The release of this record has also provided the perfect occasion to publish a mix from the man we’ve been waiting to unleash for a few months.

If you’ve taken some time to listen to a Prostitutes mix, you’ll know there tends to be a distinct theme to each of them, with the 80’s Rap Instrumentals & Dubs Mix Donadio completed for the All City label earlier this year part of the reason we were intrigued by the notion of a mix for our own series. The resultant effort is a homage to the French house scene of the late ’90s onwards, with a Pépé Bradock classic included alongside cuts from the Roulé and Source labels and some like-minded US artists. Donadio was kind enough to make some time over the recent Thanksgiving weekend to answer some questions on Black Friday, the specifics of his working relationship with Oscar Powell and forthcoming releases for Spectrum Spools and Jealous God.

Hi James, how are things? It seems like the US is probably quite a tense place at the moment?

All is well with me. This country was founded on violence and reaction so everything here is normal.

These questions are being tapped away as Black Friday is in full swing, which is a relatively new and horribly commercial thing for us in the UK. How was it for you?

My condolences. Black Friday has been a part of the holiday season here for so long I don’t even think twice about it. To me it’s just the day I drive back from my Mom’s house after Thanksgiving. I guess it’s also another Record Store Day. But you know, it’s very fitting that the blood sucking shills behind RSD would latch on to this celebration of opportunistic consumerism.  A limited edition marble vinyl reissue of “Lawyers In Love” fits perfectly along side a $45 55” LCD flat screen TV.

Thank you for doing this mix – it’s quite fun, and perhaps less bracing than the music you make yourself. What was the idea behind it?

Thank you for putting it up. I was tired of the greyscale industrial stiffness that passes for “dance music” these days and wanted to make a mix that made you grin and move your lower extremities. I was recently rediscovering all these great French house 12”s from the late ’90s while reorganizing my shelves and it led to me to put together this mix. These records left a very strong imprint on my listening habits and even on the way I make music. To this day I can put on “Music Sounds Better With You” and just fall into a fit of unmitigated joy.

Thank you. It’s very much done on purpose. There are so many online mixes that just smear into each other. I want mine to stand out and to showcase genres that seem to be forgotten and out of fashion.

How and where was it put together?

I compiled it in my basement this summer while watching Cleveland Indians games. It’s all made from original records from a real record collection. Since my mixing skills are suspect at best, I recorded each track on my ancient XP machine then used my trusty primitive tracking program to put it together. Sorry to pull the curtain back on the magic act.

Do you do much DJing in clubs, or are your bookings mostly for live performances?

When I recently played in San Francisco the lovely folks at RS94109 were kind enough to have me DJ the night after my performance at their excellent shop. That was a blast! Once in a while I’ll tag team on a reggae/dub/dancehall set with my friend at a local shithole or play some records at a Bent Crayon organized party but other than that, I hardly do DJ sets outside of Cleveland. Mostly it’s because I will only play (my) records and it’s not easy bringing a record crate and my gear when I do shows.

There was this one time I played in Seattle and they asked me to DJ in another room after my set.  I did it with all these doubles of some older 12”s I had acquired over the years.  My grand idea was to throw each one out into the crowd after I played it so I wouldn’t have to lug them back home (and have room for all the records I bought on the trip).  The very first record I winged off the turntable and into the crowd hit my friend’s girlfriend straight in the forehead.  So I would say it was a success.

Let’s discuss your new Diagonal release. By our estimation it continues your theme of titling releases after lyrics from a band – in this case it’s Simple Minds right?

That didn’t take long to figure out (or G**gle). This EP is all over the place. It’s mostly comprised of misguided and delusional ideas. Each track was what I thought was an attempt at a different genre (electro pop, Detroit deep house, jungle…) but ended up sounding absolutely nothing like any of those. I was playing the test pressing the other night for a friend and explaining to him how “Lovers Run Camp Africa” was my attempt at a KDJ record and he almost passed out from laughter at how preposterous it sounded.

What attracted you to the notion of working with Oscar and Jaime’s label?

Passion, sense of humour, vision, dedication to art and honest love of music… Working on the first 10” Oscar would write to me constantly with feedback and requests to take it further into dance territory. That really helped me not be concerned with how I thought my music was supposed to sound. It was a huge revelation. So much so that now when I work on a track I immediately know if it’s made for Diagonal. Now I consider Oscar a very close friend and he is the only person that I seek input from when I make music. I disregard it immediately, but I do seek it.

Prostitutes records have popped up in some interesting places this year. Is there one you’re particularly proud of?

My releases are my like my children and from what I learned from my friends that have children you love and regret them all equally.

From reading an interview you did with The Quietus earlier this year, I learnt you have a release forthcoming on Jealous God as The Rancor Index with John Elliott and Michael Kasparis. What should people expect from that?

Expect beats, synthesizers and vocals. After that it doesn’t matter what I tell you. You may be familiar with our music individually and with the label but it’s still outside any expectations. It was really John and Michael that took it beyond what could have been a pedestrian record. I’m just lucky I have friends that are infinitely more talented than myself.

Are there any other forthcoming projects you are working on for next year that you can talk about?

Right now the only upcoming PROSTITUTES release will be an LP on Spectrum Spools sometime in 2015. I have a couple of records that I will be a part of but nothing concrete as of yet. Also, I will be going out on my first EU/UK tour in late January/early February, so if you come out to the shows you can hear all new material that will probably never be released. So bring your micro tape recorders and contact the Russian torrent sites.