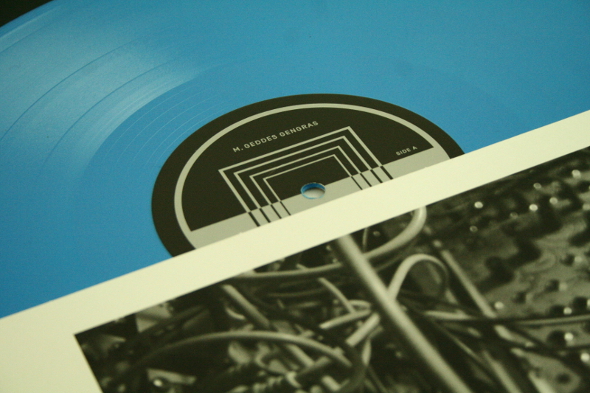 Releases from Umor Rex, Golf Channel, Lux Rec and more all made the grade in November.

Part of what makes Umor Rex such a special label is the fact no concessions are made to the design of each release, even when the scale is that much smaller – as it is on their cassette releases. The recent Derek Rogers tape was one such example, but equally, Umor Rex founder and designer Daniel Castrejon really utilises all the space afforded on a double vinyl release to showcase his design skills. The second Collected Works release on the label continued and expanded on the visual themes explored on last year’s inaugural trawl through the archives of M. Geddes Gengras, and the provided photos really only offer a glimpse of the superb job done.

Another label that looks to retain a semblance of visual consistency over all of its releases is Zurich outpost Lux Rec, which co-founder and designer in-chief Daniele Cosmo has previously stated to us is themed around “extreme iconic austerity,” and a sort of “dictatorship propaganda type of design”. For the most part, this results in the use of bold font and black and white imagery similar to that seen on Minimal Wave’s In Aeternam Vale records. It may well be simple, but the results – as demonstrated on Helena Hauff’s Shatter Cone – are quite memorable.

Given the sheer amount of releases issued by 1080p this year, its not surprising that one or two slipped beneath our radar, with the Hello World tape from Edmonton-based Dylan Khotin-Foote perhaps our most lamentable oversight. We are however grateful to Berlin label Faux Pas Musik who granted Khotin’s release a much needed vinyl edition, which expanded on the original artwork for the 1080p release by Dutch artist Fallon Does. The new art direction from Cologne-based designer Alex Ketzer took Does’ original watercolour illustration and simply overlaid the artist’s name and LP title on top in a subtle fashion. It was complemented by the choice of bold colours and fonts elsewhere as well as the sleeve material chosen by Faux Pas.

Continuing the theme of releases making the transfer from spools to wax replete with notable artwork, some applause must be raised in the direction of Aaron Siegel’s Est. 83′ label and its edition of Madteo’s mind-bending Mad Dip Revue. Offering Will Bankhead the chance to expand on his decidedly DIY printed artwork for the original 2012 tape release was as much of a masterstroke as one would expect. Again, the provided photographs don’t do the finished artwork full justice – you need to grip this one in your hands.

Recent transmissions from The Bug have arrived housed in some of the most intricately illustrated sleeves courtesy of Simon Fowler, and the London-based artist outdid himself with the sleeve for Kevin Martin’s collaboration with Dylan ‘Earth’ Carlson. Given the desolate nature of the sonics on both “Boa” and “Cold”, it’s little surprise that Fowler opted for a dystopian illustration best described as a detailed depiction of a vacuum cleaner factory in the aftermath of some concerted air bombing.

Amongst the last batch of Golf Channel releases of 2014 was the label debut of Apiento & Co. – aka Test Pressing main man Paul Byrne and associated production friends – which came sporting some fine aquatic illustrative work and art direction. The former came courtesy of East London-based Tall Paul Kelly and was complemented by the art direction and design skills of Nick Dart, who cleverly aligned the front and back covers offer up an extended fish-heavy piece.

Finally, the most distinctive sleeve work by far in November came courtesy of Blacknecks duo Truss and Bleaching Agent, whose sixth and final release with the project was the first to feature full artwork, thanks to English animator, illustrator, and film maker David Firth. Much like Firth’s Salad Fingers animation series, the artwork he did for Blacknecks 006 will not be to everyone’s tastes, but it does embody the underlying humour apparent in the Blacknecks project from the start.