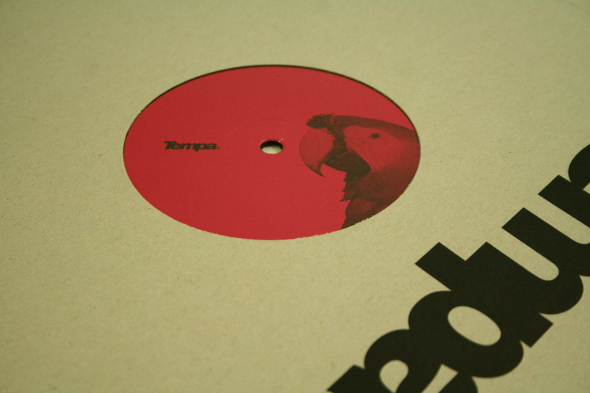 The Tempa Allstars Vol 7 release that dropped recently marked an interesting point in time for one of the labels instrumental in breaking dubstep to the wider world. With Alex Coulton, Wen and Batu amongst the artists tasked with shaping out where the iconic label is at right now, it made for a succinct demonstration of how 4/4 rhythms have truly infected bass-led music, even if not exclusively, while an industrial, monochromatic palette guides the kinds of sounds being employed. Out of those names picked as appropriate demonstrators of this phenomenon, Hodge and Facta were perhaps two of the names most conspicuous by their admission (along with Beneath). Now, with this single, it becomes clear why; the pair of Bristol producers clearly had a release already waiting in the wings, and fortunately so as we get to enjoy two tracks stretched out on their own sides of wax.

“Spheres Of Costa Rica” is a shining example of the housier end of this bass music debate, moving as it does on the kind of chunky low end rhythm and rugged groove that has typified strains of UK house music since the days of bleep techno. The muted basslines imply rather than spell out, leaving it to the mid range percussion to provide the fireworks with some melodic clangs that come on as addictive as Alex Coulton’s hooky “Brooklyn” cut on Idle Hands a couple of years back.

However these rhythmic elements are only part of the story, the rest of it being spelt out by an enchanting sample lifted from some distant, romantic folk tradition that may or may not be of Costa Rican origin. It’s that, combined with the lingering jazzy chords that hover at the back of the mix, that makes this a truly essential track, adding a hefty dose of mystery and romanticism to a style that can sometimes fall into the trap of being a bit too cold to be timeless. With such delicate and creative touches is a classic made.

Providing the appropriate contrast on the flip, “Visions” takes a knife to those sturdy house pylons and drops the niceties, falling more in line with the contemporary view on dubstep styles. It’s an oppressive atmosphere populated with all manner of bass tones from metallic scrapes to po-faced throbs, while the fractured drum programming piles on the intensity. In this place emotions collide, between claustrophobia and agoraphobia, gleeful sound design and an ensuing icy dread, a heavy approach delivered with restraint. It’s a track that never quite flies off the chain, never resorting to a massive drop or a fresh riff to turn heads, and that has to be commended. It takes a great skill and patience to make a track work without resorting to sparkle and spectacle.

In truth, it fits into the culture around which those aforementioned Allstars and others are operating, and it’s an excellent example of the style. There is perhaps a risk of the greyscale approach merging into a conglomerated whole, and it feels like it would be quite straightforward to create a seamless mixtape of these kinds of tracks until the joins were invisible. That’s not to discredit the music, but between the two sides, “Spheres Of Costa Rica” is a track that could resonate in a lot of different sets for a long time to come. “Visions” captures a particular moment in time, and it’s not necessarily one that feels like it could go on forever.

If that sounds dramatic it’s not intentional, and long may this corner of bass music be explored in a further continuation of what dubstep kicked off. The potential lies in there to end up down yet more interesting avenues and alleyways of brooding, moody UK club music.

A1. Spheres Of Costa Rica
B1. Visions