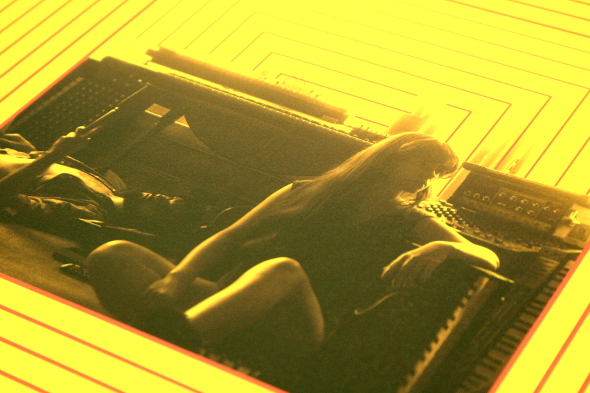 It would be fair to say that something special is happening at Glasgow’s Green Door Studio, and has been for some time. The West End institution, founded by local scene stalwarts Emily McLaren, Stuart Evans and Sam Smith, has prospered in recent years by offering local musicians subsidised production courses, free studio time and a thrillingly open-minded attitude to the possibilities of musical creation. This opportunity-for-all attitude, combined with a studio space packed with dusty old analogue kit, has paid dividends. To date, the studio has played a role in the creation and development of inspired records by Golden Teacher, Organs of Love, LAPS (AKA Ladies As Pimps, whose recent EP on Clan Destine was something of a dark, woozy masterpiece) and Hausfrau, plus a veritable skipload of obscure cassettes and 7” singles by one-off projects, unlikely supergroups and experimental combos. 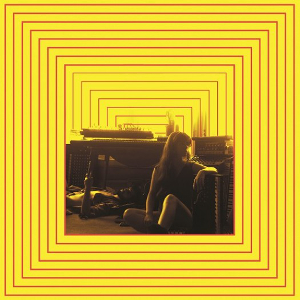 We can now add to that list Happy Meals, a boyfriend/girlfriend partnership whose creative juices were sparked during their attendance of a free studio course at Green Door. Lewis Cook and Suzanne Rodden are not total beginners – Cook is a member of Glaswegian space-rock outsiders The Cosmic Dead, for starters – but their journey to become Happy Meals began at Green Door. In fact, much of the material on Apéro, their impressive debut album, was recorded during their time studying at the not-for-profit studio space.

Like much of the music seeping out of the studio, Apéro is hard to pin down. What’s most striking, perhaps, is the duo’s keen grasp of atmosphere. While their music – ostensibly a drowsy take on leftfield pop variously influenced by psychedelia, minimal wave, Italo-disco, shoegaze and kosmiche – is unflinchingly stylish, it comes gift-wrapped in the sort of hazy, loved-up, sunrise-friendly vibe that recalls the wide-eyed innocence of the late 1980s rave scene. Of course, it doesn’t sound like rave in any way, but it does share an “anything is possible” that made that era, in both indie and dance music, so special.

This is perhaps most obvious on the epic, nine-minute opener, “Crystal Salutations”, whose dreamy synthesizer chords, horizontal atmosphere and kaleidoscopic approach recall the best work of American dream-pop heroes Peaking Lights. Echoes can also be heard in the bubbling, droning electronics, twinkling melodies, modular freakery of “Electronic Disco”. Despite the title, this is not a disco record, rather an attractive saunter into the kind of horizontal, psychedelic pop that evokes memories of chilly, sun-lit autumnal mornings and hazy spring sunsets. “The Age of Love”, too, has a similar ethos, though its’ tipsy electronics, tumbling melodies and subtly distorted vocals come cloaked in the unfettered positivity of classic experimental synth-pop. It, too, feels like an extended exercise in psychedelic atmospherics.

Of course, not all of the tracks on  dance to this tune (or shuffle, at least). There’s a surprisingly clean and jaunty feel to “Altered Images”, where Rodden’s French vocals are accompanied by a tactile synth bassline – vintage electrofunk meets Orange Juice –and huggable melodies. “Visions of Utopia” has an altogether icier feel, as if Cook and Rodden’s idea of Elysium involves a sparse room populated by long-forgotten modular synthesizers, threadbare carpets and a stack of surprisingly cheery coldwave records. As for closer “Le Voyage”, it flirts with early French synth-wave before morphing into an upbeat chunk of metronomic space disco. Rodden’s French vocals are simultaneously seductive and standoffish, with live-sounding drums and 303 style electronics pushing the action forward.

Given the duo’s relative paucity of experience, Apéro is a surprisingly assured debut; more instantly accessible than some acts associated with Green Door Studio, the album still has enough depth to encourage repeated listens. It sounds like the start of a great journey for Happy Meals. Whether it is remains to be seen; if not, we’ll always have this deliciously vibrant debut.