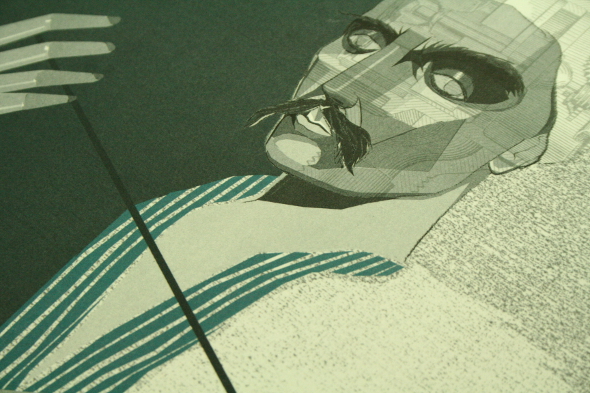 It would be fair to say that Andrew Thompson’s Huntleys & Palmers label has come of age in 2014. While the pleasingly open-minded imprint was started in 2011 as a vehicle for dancefloor-focused global fusion – based, in part, on the success of the parties of the same name in Glasgow and London – their releases have previously been sporadic, at best. Given the generally high calibre of these releases – not just those by the ubiquitous Auntie Flo, but also the cumbia-bleep heaviness of Alejandro Paz’s “Callejero”, and the kuduro-influenced dancefloor madness of DJs Pareja’s “Steps” – it was a source of constant frustration for those attuned to their thrillingly hard-to-pigeonhole blends of bass, house, techno and intercontinental rhythms. 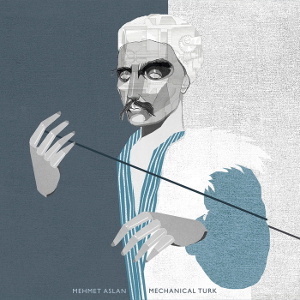 2014 has seen a slow ramping up of the label’s output. At the same time, Thompson has emphasized championing new talent, with admirable debuts from Mamacita and Welsh combo Petwo Evans, whose admirable Tumble 10” impeccably fused pots-and-pans percussion with cascading melodies and sharp, stab-heavy, rave-influenced electronics. Here, Thompson continues this commendable approach by handing a debut to Mehmet Aslan, a Basel-based DJ producer who has long been on the label’s radar. Thompson met Aslan at the Family Affairs party he co-runs, a night whose musical ethos closely mirrors that of the now esteemed Highlife parties. Aslan is not a total newcomer, having contributed two impressive scalpel works to H+P’s DJ-focused Highlife Edits offshoot, but Mechanical Turk is his first foray into original production. Predictably, it’s quietly impressive.

Aslan’s approach is perfect for Huntleys & Palmers. Aside from being an enthusiastic supporter of their usual brand of international cross-pollination – see the tumbling, lo-fi electronics, Larry Heard chords and dense, dub-wise voodoo drums of “New Africanism” – Aslan also draws heavily on his Turkish roots. It’s this aspect, more than anything else, which gives Mechanical Turk such a fresh and invigorating feel. Of course, oriental influences have previously been explored in contemporary house music – see the Acid Arab compilation, for starters – but few have done it in such an effortlessly warm and expansive manner.

The centerpiece of the 12″ is undoubtedly the title track, a reworking of Romanian group Karpov Not Kasparov which ebbs, flows, rises and falls over nine spellbinding minutes. The track’s opening exchanges, where off-kilter arpeggios and woozy chords stretch out overran unfussy drum machine groove, are solid, rather than sensational. This though, is merely lulling listeners into a false sense of security; what follows is a gloriously cacophonous and rhythmically dense fusion of exotic Turkish melodies, organic percussion hits (cowbells, cymbals, snare fills, you name it), a foreboding, Middle Eastern bassline and, most curiously of all, synthesized “voice” chords of the type used so memorably on “Blue Monday” and “West End Girls”.

Somehow, Aslan not only finds order amongst the chaos, but combines the elements in such a way that “Mechanical Turk (Courtesy of Karpov not Kasparov)” sounds like a left-of-centre dancefloor anthem in waiting. It’s a house record, of sorts (there are even jangling, late ‘90s piano chords in the second half of the track), but also doffs a cap to a myriad of other styles – post-punk disco and afro-futurism, most notably – whilst not sounding anything like any of them. It’s brilliantly hard to pin down, which of course makes it all the more alluring.

While the rest of the 12″ fails to live up to this dizzying high, the other two tracks are still worth a listen. “Hidden”, in particular, is mesmerizing – a hypnotic blend of shuffling percussion, long chords, humid electronics and foreboding melodies. Unlike the A-side, it builds slowly and gently, only cutting loose in the final few minutes. It’s at this point where Aslan’s Turkish roots once again come to the fore. This time, it’s via a standout acid bassline that perfectly compliments the faintly threatening chords and restless rhythm. It’s could feasibly soundtrack a late night chase through the streets of Istanbul; despite its’ impressive dancefloor credentials, it’s strangely cinematic in feel.