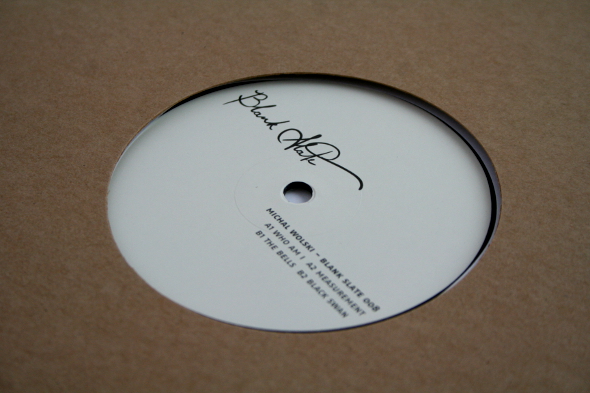 Continuing the release pattern that has driven Blank Slate from the off, Michal Wolski is making his solo vinyl debut here following an appearance on the Various Artists 006 release for Soren Jahan and Kamal Neem’s label. It’s a smart strategy that throws the tastes and styles of the label far and wide before homing in on particular facets, giving us the chance to keep up with Blank Slate’s enthusiastic A&Ring without passing over an particular gems. Wolski’s previous contribution, the crunching psych-out techno of “Derivate”, makes for a perfect primer to the full EP, where the many-layered characteristics of the single track get expanded upon over four separate cuts. 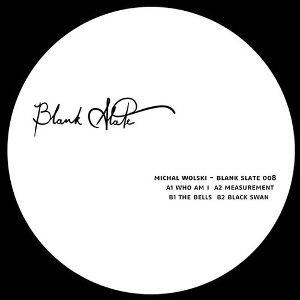 “Who Am I” wastes no time in making its malicious intentions clear, ripping into a wonky but exquisitely produced square wave bass line that suggests unhinged events ahead. Over a steady build up of minimal percussive elements a decidedly mean-tempered techno cut is born, cold in its demeanour with enough dubby blasts of noise to keep the overall mood deep. Truthfully it’s the bassline that makes the tune, keeping the groove sloshing against the sides of the stout drum arrangement.

There’s a much more subtle and protracted force at work on “Measurement”, which comes to life slowly through a mist of unsettling tones and precise cycles of vapour release. As the ring-modulated bells chime out a discordant peal, you know you’re in for an unsettling ride. It’s also a restrained beast; even as the dubby synth scrapes filter in to flesh the track out, the pace is never lifted above a funereal march.

“Bells” too begins in sparse and uneasy circumstances, with subby murmurs of rhythm offset by quietly twinkling melodies that unfurl with music box grace. It’s far less foreboding than “Measurement”, even if a palpable darkness lingers in the undertow. The Mathew Jonson-esque synth groans later into the track add another dimension of soul to the track, but even here Wolski manages to inflict some kind of malady on the sound.

By the fourth track it becomes clear that slow-burning lead ins is the name of the game, as “Black Swan” takes on its own assortment of foreboding pads and scratchy sound design while it slowly grows into a icy prowler of a track. The way the haunting wraiths of melody evolve throughout the track is spellbinding, loading up the atmosphere just as the beat subtly embellishes itself into an even-paced stomper. Even at its peak the track is still far down the energy scale of dark techno, but it hardly matters as the highly developed musicianship draws on the orchestral processing of Murcof and works it to a danceable beat.

In the end, it’s the less obvious path that reaps the most reward, and Michal Wolski has done a fine job of demonstrating how much worth there is in holding back. In some areas the slender beats and spacious arrangements would constitute this music as minimal, but in truth it never feels that way as you listen to it. Rather, an immersive and positively tangible energy emanates from each and every track, teasing you in slowly until the subtlest shifts sound monolithic. It’s a might fine achievement that could spell any number of exciting futures for both artist and listener alike.