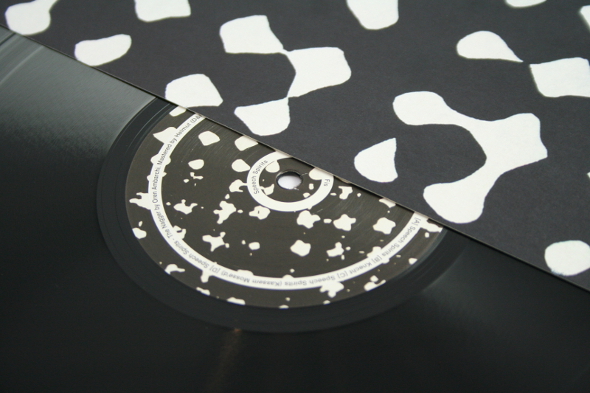 Leaving Records, Houndstooth, The Trilogy Tapes and L.I.E.S. were amongst the labels whose releases stood out in September.

Like much of Eric Copeland’s musical output under his own name and as part of Black Dice, the Logo My Ego album issued by L.I.E.S. will not be to everybody’s tastes. There is however no denying the New Yorker’s taste for sonic collage shown on the album is met and matched by the cover art, which looks like Copeland has taken a scalpel and glue to some rotting Ghostbusters comics. Equally evocative of the music held within was the art direction from Leaving Records’ in-house visual artist Jesse Moretti for the Human Voice, the latest DNTEL album from Jimmy Tamborello. Bold yet abstract, the digitally processed imagery on the sleeve mirrors Tamborello’s use of random human voices, manipulated beyond their original sound into strange new forms.

Pay close attention and you’ll discover there’s an established design framework Will Bankhead uses for all the 12″ releases on The Trilogy Tapes. Tracklisting and artist info goes on the sleeve spine, whilst the sleeves themselves are reverse board with a matt UV varnish that has a distinctive touch to it, and a plain white back with space carved to show the centre label of the record. This still leaves plenty of room for visual ingenuity where it matters most, and it’s his work on the front sleeve where Bankhead stands apart from many of his contemporaries. Take the much delayed Drizzling Glass by Future Times man Max D for example; who else would think to use an image of ornamental iron framework? Especially one that’s hard to decipher whether it’s a real photo or artificially rendered.

Whilst the label name may leave a smirk on your face, there is no denying that newcomer Loopy is a good example of a fresh record label making a fine impression with its inaugural release. Taking original material from an exciting newcomer in Fis, and pairing it up with remixes by two diverse artists in Kassem Mosse and Oren Ambarchi ensures that the ears of more refined selectors and collectors are fully paying attention. It’s nice to see Loopy put as much thought into how they present their records too, with the ink blot-style patterns of the sleeve courtesy of respected New York painter Linda Francis quite distinctive. Much the same can be said of the debut transmission from newcomer Spaces on Bleep’s in-house label thanks to the vivid cover art from London-based graphic designer John-Patrick Hartnett that brings to mind a school of dolphins being watched through heat vision by the iconic ’80s alien Predator.

The work that Guy Featherstone does with Diagonal has been featured numerous times within the confines of this column and anyone who follows the label will need little in the way of justification. Put simply, Featherstone consistently excels at his given brief, achieving the perfect balance of clear, clean design filled with small detail that continually catches the eye. The artwork done for Powder Horn, the dizzyingly brilliant album from Shit & Shine is just the latest example of how well attuned Featherstone and Diagonal are.

There is little doubt Joseph Seaton’s debut album as Call Super will rank highly on the obligatory end of year round ups, and Suzi Ecto is made all the more memorable for the attention to detail that has gone into the presentation. The cover image again finds Seaton re-purposing a painting by his own father in a more expansive manner than The Present Tense 12″ that signalled his arrival on Houndstooth last year. It’s further blessed by photographs taken by the artist which convey the bliss/suffering themes of the album (discussed in detail by Seaton with Rory Gibb here) and the typography setting, which is purposefully positioned at angles that make you continually readjust visually, in a similar manner to the way the music reveals something new with every listen.

A closing mention to Ken Meier and Yoonjai Choi of the NYC design agency Common Name whose work on the debut release in Surgeon’s reissue focused SRX series more than justified their commission and leaves this writer eager to see how they develop the theme over the ensuing five releases.