The German duo will release an album titled Riot though Robert Witschakowski’s Solar One Music label in November.

Active since 2009, The Exaltics project from Robert Witschakowski (pictured above) has now cemented itself as a modern day pillar of electro, acid and techno sounds, gracing everyone from Bunker Records, Crème Organization and Clone, to others like Modal Analysis, Abstract Forms and Last Known Trajectory. As Richard Brophy highlighted in his review of the recent Exaltics record for Dutch label Shipwrec, Witschakowski “doesn’t make the common mistake of releasing records that all sound the same”.

This can again be said for his new Val_Ex project which is a collaboration between The Exaltics and Arne Weinberg’s experimental Valanx pursuit. For the uninitiated, Weinberg has been producing various brands of experimental, dub, industrial and electro-tinged techno since the early 2000s, releasing records for the now defunct Frustrated Funk sub-label Frantic Flows, Echocord, and Abstract Forms. More recently, the Glasgow-based producer set up the diametric. label which helped launch his Valanx project in 2012 with the recommended Xenolith LP.

Together both Germans form Val_Ex and their debut comes in the shape of the eight-track album Riot to be released on Witschakowski’s own Solar One Music next month replete with one of the year’s more distinctive LP covers. Given the pair’s collective range, it’s no surprise to hear the forthcoming album covers ambient, electro, industrial and electronica, with a write up further explaining the music as deep and “undeniably pure darkness.” The album, which is set to be released across a number of formats (including a limited collectors edition box set that can be pre-ordered here) is available to preview below.

Solar One Music will release Riot by Val_Ex on November 1. 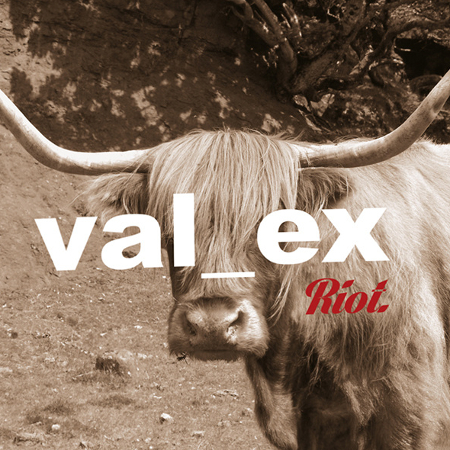 A1. Sacrifice
A2. Metacognition
A3. Atom
A4. Dying Embers
B1. The Xecutioner
B2. Fall Back
B3. Terretories
B4. You´ve never been right