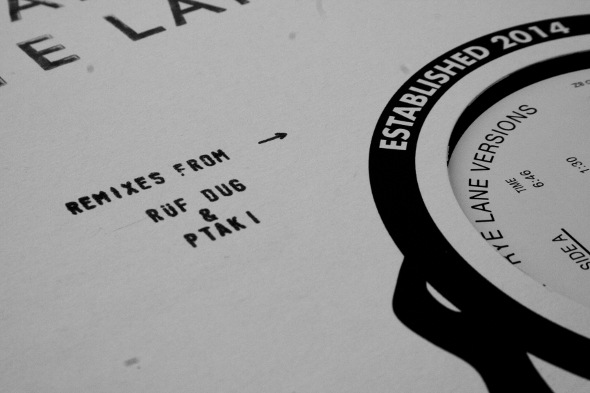 For those of us who review music for a living, the laziness of both artists and labels can be a constant source of frustration. This is particularly true when it comes to the humble remix. So often an afterthought or a simple marketing exercise, the power of the remix has waned in recent years thanks to a combination of sound-alike versions, limp revisions and needless, big name tweaks. That’s not to say that inspired, next-level remixes aren’t being released – see Maxmillion Dunbar’s schizophrenic, juke-goes-jack revision of Adjowa’s synth-laden “Science of Soul”, or Cloudface’s inspired, pitched-down new age house take on Bantam Lions’ “Recollections” for recent examples – it’s just that they seem increasingly few and far between. 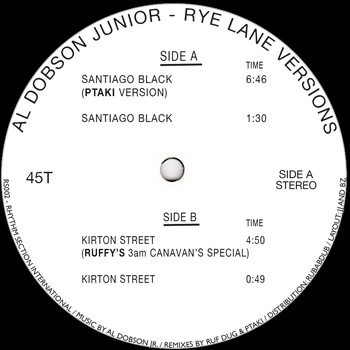 Of course, we shouldn’t tar all producers and label bosses with the same brush. There are some who still buy into the idea of the remix as an artistic statement, or at least a straightforward chance to offer up a rework that takes you by surprise. That can certainly be said of Boiler Room man Bradley Zero’s recently launched Rhythm Section International imprint. When it came to putting together the label’s second 12” single, he decided to be bold. He was going to get remixes of two short, previously unheard, MPC-driven interludes originally intended for Al Dobson Jr’s acclaimed debut mini-album, Rye Lane Volume 1. Furthermore, he was going to be inventive with his choice of remixers, asking little-known Polish duo Ptaki – best known for their slo-mo re-edits of obscure Eastern European disco for The Very Polish Cut-Outs label and rising star Ruf Dug to do the honours.

While this may not sound particularly revolutionary, the remixers weren’t given much to work with. Of the two tracks chosen for the rework treatment, one – “Santiago Black” – was little more than a 90 second tropical drum work out (admittedly with the addition of a bassline). The other, “Kirton Road”, was even shorter; 50 seconds of heady beats, dreamy guitar samples and a cut-up vocal. Good luck, boys. In hindsight, it was something of a masterstroke. With such a paucity of material at their disposal, both Ptaki and Ruf Dug were forced to think on their feet. There weren’t many parts to play with, so they’d need to take Dobson Jr’s cuts in totally new directions, using his work as little more than inspiration. As a result, their remixes on this Rye Lane Versions 12” bear little resemblance to the originals. Instead, they’ve delivered entirely new tracks built around minimal segments from the South London producer’s tracks.

Ptaki’s version of “Santiago Black” is the most immediately ear-catching. Short, crackly drum loops from Dobson Jr’s original are used as the base for a hypnotic, head nodding, 110 BPM piano house jam. Loose, repetitive electric piano riffs are joined by a solitary vocal sample and a chunky, oh-so-simple bassline. Really, there’s little more to it than that. Of course, the track slowly builds, with additional elements – a whisper of synthesized strings here, an additional new age synth sweep there – joining the fray as and when, but it’s still a thing of rare simplicity. It’s also really rather wonderful – a joyously sunny and sticky concoction that enhances Ptaki’s reputation as producers on the rise. For all its’ house credentials, the remix retains the looseness and fuzzy analogue feel of Dobson Jr’s original. It feels like the track he should have made in the first place.

For all its’ smiling innocence and revelatory revisionism, Ptaki’s remix is relatively simple compared to Ruf Dug’s overhaul of “Kirton Street”. The Mancunian producer has taken a handful of elements from the original – the oh-so short guitar, organ and vocal samples – and woven them into the fabric of an off-kilter, midtempo house track that doffs an oversized cap to Dobson Jr’s twitchy, MPC-wielding production method. His analogue percussion – cranky, hissing, loose and decidedly wonky, despite its’ 4/4 time signature – is the perfect bed for reworked blasts of the organ stab, those nagging guitars and a wealth of new elements (think synth strings, intergalactic electronics and some decidedly cheap-sounding stabs). Oh, and a pulsating, speaker-rattling bassline that ties the whole thing together whilst providing a wobbly focal point. It’s nowhere near as celebratory as Ptaki’s version of “Santiago Black”, but it has real depth and emotional resonance. It’s a brilliant revision – one of the most imaginative and expressive you’ll find – and beyond a shadow of a doubt proves the artistic worth and potential of the remix. If only all remixes were this good.