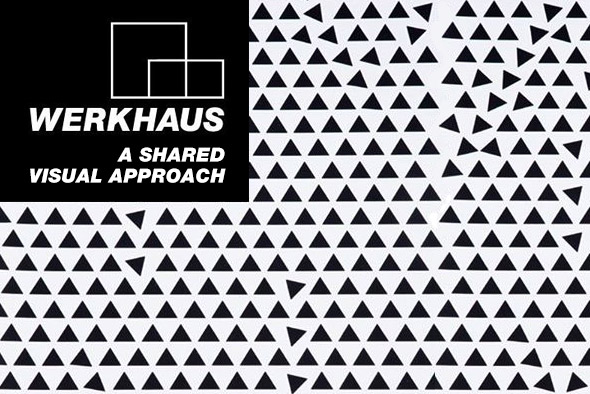 Born out of Werkdiscs, Werkhaus explores the aesthetic possibilities for music as well as the perceived limits of a traditional record label. Emma Tucker catches up with them to discuss the development of Werkhaus as a standalone project, the importance of a visual approach and how film can humanise electronic music.

From the overlapping, minimal typography of Lukid’s album Chord, to the straightforward black and white stripes of Moiré’s Shelter artwork, Darren Cunningham’s Werkdiscs is clearly an outfit that values a strong aesthetic. In a time where there seems to be a new label popping up every week, Werkdiscs has consistently managed to stand out from the background noise using striking design and art direction. With so many labels leaving their visual identity trailing behind, being noticed is now as much about creating a recognisable visual attitude as it is about a particular sound. It-label PC Music’s purposefully naïve design approach, with its use of Comic Sans, mock-stock photography and glossy bubblegum colours, is a perfect example of how a deliberate graphic persona can work in partnership with the music.

Darren Cunningham has taken this to the next level by launching a purely visual offshoot of the Werkdiscs label. Werkhaus, founded back in 2010, collaborates with a roster of visual artists on live events, short films, documentaries and installation art. It’s quite the remit, but it addresses the fact that running a record label isn’t only about releasing music. “Why ‘just’ do music?” Werkhaus tell us, over the phone. “Even if you’re just a record label, are you really just a record label? You’re still getting people to design artwork for you, you’re still marketing yourself in a certain way to a certain niche, and why not have fun with that?”

Werkhaus came about as a natural progression of the work the label had already been doing. “Over the years we’ve worked with many talented artists on artwork, music videos, and that kind of thing,” they say. “We just sat down one day and thought it would be really interesting to explore those relationships further and see what comes out of it.” Set up as a portal to new collaborative artistic projects, the last four years have seen Werkhaus involved with a range of pieces, from commissioned music videos to performance and installation projects, often uniting releases from the label, or individuals from the Werkdiscs roster, with visual artists. 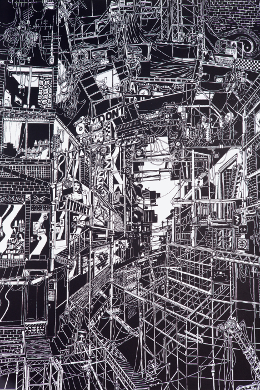 A crossover between the two entities was inevitable, with the label allowing Werkhaus to set out with a line-up of image makers they were already familiar with. Without constraining themselves to any particular end goal or aim, the project remained fluid. “We wanted to see how things developed, and we first wanted to establish stronger relationships with our artists, so we worked on small projects, just to develop those relationships further, and understand where the artists were coming from and how they wanted to work,” they say. “That progressed and we started to get people coming to us and asking us to work on things.”

Werkhaus is focused on these relationships coming about as natural developments, rather than working as an acquisitive talent agency. “We don’t actively go out looking for artists to work with,” they explain. “Over time those relationships find you, or you find each other. We’ve met people in a nightclub and gone home and looked at their work, and liked them as a person and liked their work, and maybe it’s taken a year before we’ve found an opportunity to bring them in. We don’t sit there trawling the internet trying to find the next big thing.” The authenticity of these artist relationships is something that Werkhaus is firmly grounded in, and it’s clear that their approach to the individuals they work with is as much about getting to know their personality and what lies behind their work as it is finding them commissions.

As with any business, there’s the line drawn between art and commerce, and although Werkhaus partner with both cultural and commercial enterprises they explain that there are unique challenges that come with both. “There have been situations where we’ve been offered something with a cultural enterprise that sounds great on paper, but the project hasn’t been right for us so we’ve declined,” they explain. “We’re not just saying no to the money men.”

Many of the projects Werkhaus have been involved with have come about through Werkdiscs, with the label and the visual element functioning as gateways to one another. “It’s inevitable that, certainly to begin with, Werkdiscs was going to lead the way,” they say. “Because of the music that we put out, we often get proposals through – from the normal to the completely extraordinary. What’s been great is the ability for us to be able to take a proposal that’s come in for Actress, for example, and because he’s busy and he’s working on numerous projects all the time, to then suggest to the commissioner that we put someone else forward, and start to bring through a younger artist.” A recent collaboration between Giganta and Margot Bowman came about via an original proposal to Actress, allowing Werkhaus to suggest an alternative. It all seems very democratic, and they say, “We want to be able to bring through everybody that we’re working with and provide opportunities for everybody.”

Another recent performance piece, A Shared Cultural Memory, also allowed them to open up an original Werkdiscs pitch to Werkhaus, introducing Nic Hamilton as a visual element. “It wasn’t perfect, by any stretch,” they say, “but it was the process, and I think each of them moved slightly outside of their comfort zone.” It also offered a chance for Actress, artist Eddie Peake and Hamilton to collaborate on something together, in person – an opportunity that hadn’t come around before.

Werkdiscs, perhaps more than other labels, feels like it fits perfectly with this aesthetic approach. Their releases often ‘feel’ visual, in some kind of layered and indefinable way, and in fact it’s this element that’s led Werkhaus to some of its collaborators. They explain that Actress’s work, more than any other release they’ve put out, has prompted a visual response – some of which has come via commissioned artwork, and some of which has happened by chance. Werkhaus’ association with Nic Hamilton was actually the result of a video he created ‘out of the blue’ for Actress.

The visual label has also been a chance to push Werkdiscs artists out of their comfort zone. One of their most striking pieces to date is the video for Moiré’s “Attitude”. The video, directed by João Retorta, humanises the track, turning its wispy dryness into something more deeply relatable. Moiré, a visual artist himself, has worked with geometric 3D videos in the past, and Werkhaus’s suggestion to film a live action video provoked some hesitance. “Actually the end result he was really happy with and I think we’ve seen a really positive response to it,” they say. “He’s enjoying that because it’s a different perception of his music.”

This is where the potential for Werkhaus really lies: its ability to completely transform a track. “When we were talking about videos, we were talking about live action because he is human, he is real. This music is made by real people not just computers,” explain Werkhaus. And indeed, when it comes to electronic music it’s easy to forget that there’s a human touch behind it. Projects like Werkhaus, with their commitment to the visual, are reviving the way we experience and understand music, emphasising that this can be as much to do with our eyes as it is our ears. As people rediscover physical releases, artwork is no longer constrained by the pixels of a Spotify or iTunes thumbnail. Developing a commitment to the visual is one way to elevate a label above and beyond its perceived limits, establishing it as a coherent artistic project.

“There’s so much information available now that it’s a bit overwhelming,” Werkhaus say. “That is why continuity with aesthetic is important. It’s important to be known for something. You can play with that once you’re established, but having an identity helps people understand where you fit into that noise.”