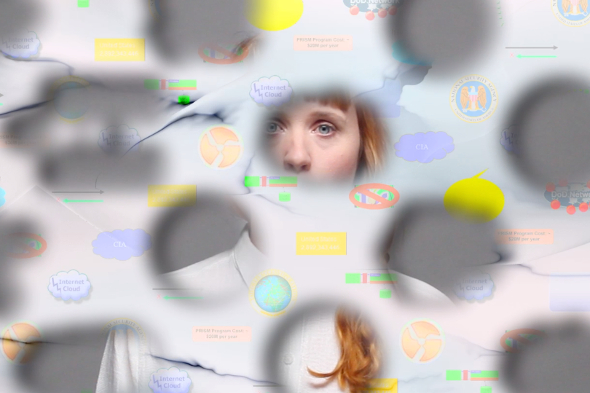 Last seen experimenting with choreography and sound design for a dashing 10″ release on Infinite Greyscale, the multi-disciplinary artist today released a new single called Home via regular home RVNG Intl. The one-track transmission precedes a promised second album from Herndon for the New York label, arriving after some low-key online guerilla marketing last week in the shape of an interactive website. Entitled Call Holly Herndon, the site was created with the help of Dutch design collective Metahaven and frequent Herndon collaborator Mat Dryhurst, and laid a slightly unclear marker down for what to expect from the new single.

Described by RVNG as the “definitive NSA break up anthem,” Herndon’s new single continues to develop her interest in examining and exploring the relationship we have with everyday technology. A press release quotes Herndon as stating the privacy scandal that recently rocked the NSA has affected her relationship with this technology, providing the genesis for the new single. “To learn this intimacy had been compromised felt like a grand betrayal. Is everything done privately on my laptop to be considered a public performance? In “Home”, I address that invisible audience. It is a love song for prying eyes (an agent / a critic), and also a break up song with the devices with which I shared a naive relationship.”

As well as playing an integral role in the teaser website rolled out last week, the aforementioned Metahaven collective were also tasked with drawing up an accompanying video for the single, falling comfortably into the line of superb visual commissions from RVNG this year. Metahaven’s finished video can be viewed below, playing superbly on the themes explored by Herndon lyrically, with a representative stating the following:

“The NSA spying on our network may have been tacitly known from reports going back as far as 2002, but the aesthetics of this surveillance were not so known. Code names, acronyms, icons and graphics from a shadow world designed to never be publicly exposed. For “Home,” we created a data rain of these NSA symbols. The video sees Holly from two angles; one where she is facing the camera, singing, another where she is being photographed and appears as if under surveillance. This track grasps a balance between vulnerability and control.”