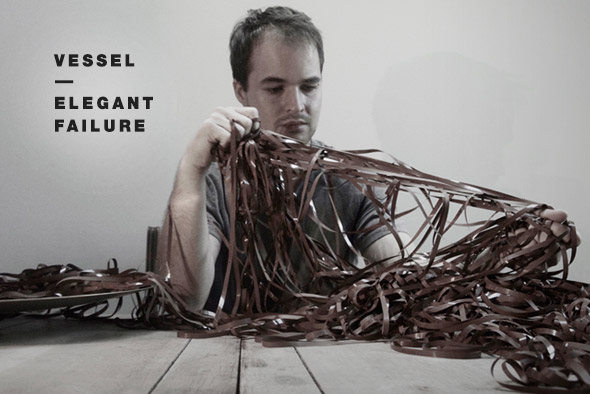 Josh Hall sits down with Vessel to discuss the intentions and interesting methods behind his new album, the conflicted nature of English national identity and disrupting the norm in clubs.

The promoters were very polite about it, Seb Gainsborough says, but Young Echo still got thrown off the decks at the recent Berlin Atonal festival. “We’re really bad for stirring up shit,” the producer explains. The group were booked to play the 6am slot at Globus, “and people were ready to go mad, but we were just doing our thing.” Moondog records, it turns out, aren’t enormously popular as the sun rises above Tresor.

It’s no surprise that Young Echo divide opinion – they’re not a conventional DJ outfit. The sheer size of the Bristol collective, which alongside Gainsborough also includes Kahn, Neek, Ishan Sound, Jabu, Manonmars, and Rider Shafique, means that the styles of records they play “vary enormously.” That “disruption of the traditional DJ trajectory,” Gainsborough says, “throws people a little. I think maybe six o’clock in the morning in Berlin is not the time to do that.” Despite intransigent Mitte crowds, though, Gainsborough remains stoic. When promoters book Young Echo, his says, “They’ve booked us for what we’re going to do. If we fold, and consciously change our approach because we feel we need to appease the audience, I think that’s really dangerous”. He concludes by stating “there are enough people doing that already.”

Young Echo and their constituent members have enjoyed increasing success over the course of the past few years thanks to records such as Nexus on RAMP and a self-titled EP under their Killing Sound alias for Blackest Ever Black. As we speak now, though, Gainsborough is preparing to release his second solo album for Tri Angle. Where his first, Order of Noise, pushed techno into its distended hinterlands, Punish, Honey focuses on spring-tight song structure, hinging on simple rhythmic and melodic ideas made strange. For Gainsborough, the record is an attempt to “consolidate a lot of the ideas that I worked on with Order of Noise, and to a certain degree invert them as well.” Gainsborough reveals is debut album was made “in a constant state of anxiety and paranoia, and complete and utter confusion, because I’d never made anything like that – I’d never made a whole long player before.” When it came to making Punish, Honey, he realised it “had to be confident, and it had to be more simple. More accessible. I just wanted a more clear way to communicate with the audience, and that’s certainly why rhythmically it’s quite crude.” 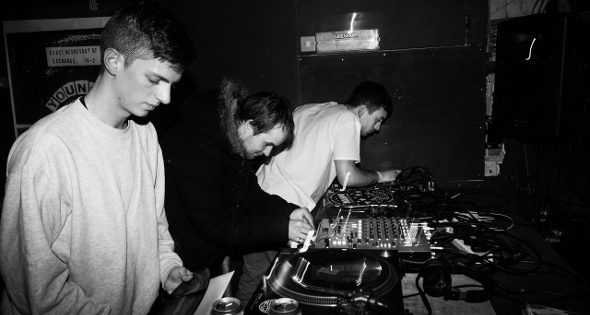 Punish, Honey is, at heart, a very weird pop record. It has verse-chorus structures, recurring melodic motifs, and percussion that provides a propulsive foundation, in contrast with Order of Noise’s atmospherics. Having finished the album, though, Gainsborough believes he may have strayed too far in this direction. “For me,” he says, “it’s an elegant failure. I think anyone who creates anything is going to be super-critical, but maybe now I feel it’s too crude rhythmically, and maybe I feel it’s not experimental enough structurally.”

But Punish, Honey remains immediately and reliably gripping, and this is in part down to its instrumentation. Those unnervingly simple ideas become unfamiliar through the introduction of sounds that inhabit some strange midpoint between baroque and industrial. They are at once mechanical and organic: there’s something that sounds like a hand-wound church organ in desperate need of tuning, or cymbals that appear to have been crudely fashioned from corrugated iron. “The main instrument that you hear on several tracks,” Gainsborough says, “is a harmonic guitar. It’s a piece of hardwood with thick gauge strings stretched across it like a zither, and a big thick gauge metal nail in the middle to create a bridge. On one side you play with a bow or with a glass, and on the other side you have a pickup. Because you’re not picking up any of the tones, because you’re not playing above the pickup, you’re picking up these huge washes of harmonics, which sound like church bells.”

In addition, the album features what he describes as “incredibly crude wind instruments” fashioned out of “bike frames and other bits and pieces I found in skips around Bristol”. This, he admits, was a complicated procedure. “I couldn’t do anything advanced with it, beyond drilling a few holes in it and shaping the mouthpiece. But that was the beauty of it for me, that I had no idea how to work these materials, no idea how to create these incredibly advanced instruments that people had spent hundreds of years honing.” The results are in Gainsborough’s mind distinct, “It was broken and ugly, but it was something that was mine.”

It’s notable, when so many musicians engross themselves in the endless possibilities of soft synths, that Gainsborough has chosen to focus on new, imperfect iterations of instruments that have a long and storied heritage. “We seem to be permanently struggling to find the most effective, powerful sound,” Gainsborough says, “and I think that’s a complex that a lot of contemporary electronic artists suffer from, and the audience suffers from as well.”

The realisation struck Gainsborough that this really tired him after listening to records where traditional instruments like the saxophone were “played wrong”. He goes on to explaim, “If you hear someone playing a sax wrong, you can hear the physical mediation, you can hear the wrongness going from the body to the instrument, and somehow that’s a lot weirder, and a lot sexier, and a lot more fucked up, than some white post-grad in a university somewhere playing on some highly advanced piece of synthesis technology.”

But despite the insalubrious manner in which the instruments were constructed, Punish, Honey is also, perhaps surprisingly, a record that positively oozes sex. It’s steamy, weirdly explicit, probably deserving of a NSFW tag on SoundCloud. This is no accident. “It’s hard to talk about it in concrete terms”, Gainsborough says, “but physically I wanted it to feel kind of disgusting, to feel slimy but also really seductive as well – like the best kind of sex that we don’t like talking about. Kind of degrading.”

“But there’s something very liberating in letting go of habits and attitudes that hold us back, and maybe that society teaches us is a proper way to behave. Actually, we just need to take our clothes off and roll around in the mud a bit.” 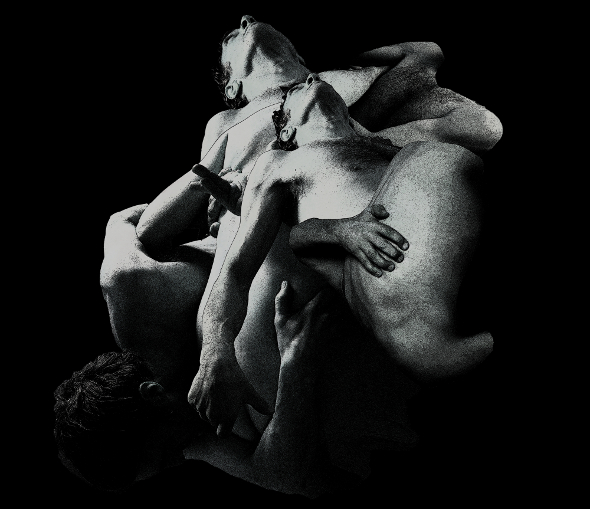 Punish, Honey, though, isn’t just an album about sex. It’s also an intensely English record, one in which folk music traditions are warped and misshapen. While he is keen for the album not to be seen as conceptual, Gainsborough has been open about the impact that he believes his Englishness has had on his music. “I was listening to bands like The Shadow Ring,” he says, “and it just struck me that they did have an English sound. Obviously that’s very subjective – my perception of what Englishness is, is going to differ massively from my next-door neighbour or my best friend. But once I’d identified those aspects of Englishness, I started to subconsciously look for them in my own music, and maybe amplify them.”

It’s a mark of the album’s quality that it seems to inhabit an Englishness that is both historical and contemporary, appearing to flit across the history of English music, from the Medieval era to the 21st century. Gainsborough acknowledges that Englishness, if it can be defined at all, is in constant flux. 60 years ago, he says, English music “would have been something completely different, but I think certain qualities do hang about. They tend to stay somewhere in the makeup of the music.”

But a conversation about national identity must necessarily be more nuanced than a discussion simply about English music. It is impossible to separate ideas of nation from value judgements, and ‘Englishness’ is a concept that carries more baggage, both in its past and in its present, than most. “I think especially in people of my generation,” Gainsborough says, national identity is “almost a taboo subject. We can’t speak about English national identity without being ironic. I think a lot of that has to do with feeling ashamed about England’s role in shaping the world that we know today – attitudes towards race, ideas of slavery, politics. It’s a very difficult conversation to have without sinking down to just ironic asides about how crap it is to be English.” 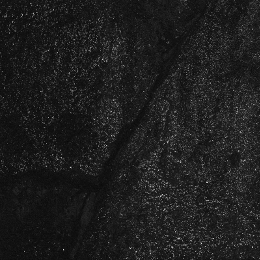 Stewart Lee has a routine in which he recounts a conversation with a taxi driver who maintained that you can be “thrown in jail” for saying that you’re English. The idea of Englishness as taboo is a central tenet of the right, and it’s one to which Gainsborough swerves dangerously close. His, though, seems to be a more engaged reading of English identity, and one that is continuous with the idea of competing nationalisms that has returned to the forefront of politics. Gainsborough understands that an increasingly virulent, aggressive nationalism across the world is in part due to the vagaries of globalisation, and a sense that national differentiation is under threat. “It’s like being cast free in an open-ended ocean,” he says. “You’re not obliged to stay loyal to your tribe. You can go anywhere and be anyone, and immerse yourself in completely different cultures which are not your own, but you can make them your own. I find it unsurprising that people feel threatened by that sense of freedom.”

But, despite a global atmosphere of political retrenchment, and the increasingly real danger posed by states at cultural and strategic loggerheads, Gainsborough believes that we can still entertain notions of national identity that are not tied up with competing nationalisms. “I do think it’s possible,” he says, “but perhaps it’s not entirely fair to look at one without looking at the other. I think we can learn a lot about ourselves and the way we are from doing that. That’s more about national psyches and the qualities of us as individuals, as products of our history.”

You need only consider the collective madness that greets news of a second royal baby, or the hundreds of thousands of yards of bunting that seemed to cover the country during the Jubilee, or the baffling popularity of Billy Bragg’s ‘progressive patriotism’, to see that Englishness is clearly not a taboo. There are, of course, many very good reasons why it should be. Punish, Honey is a record that seems to recognise that conflicted nature of English national identity, and attempts to offer a new interpretation of some of the folk traditions to which people still cling. Gainsborough is conscious of the hazards that conversations about Englishness present, and he seems alive to the contradictions that his record presents. Punish, Honey is not, thankfully, a concept record, but it is a record with a conceptual foundation. It is in this that Gainsborough’s real accomplishment can be found.

Punish, Honey is out now on Tri Angle Records