Mind Fair – Take Me To The Bridge

Despite the quality of the material they’ve released, Dean Meredith and Ben Shenton’s Mind Fair project has always been a little puzzling. While there are constant threads in their work – a love of live instrumentation, warm but sparse mix-downs and notable nods to dub disco, Baelarica and folksy psychedelia, for example – they have so far steadfastly refused to stick to one style. It’s almost as if they’ve yet to settle on one groove, or have far too many ideas than they know what to do with. Certainly, their shared inspirations are manifold, and to date they’ve dabbled in most of them. 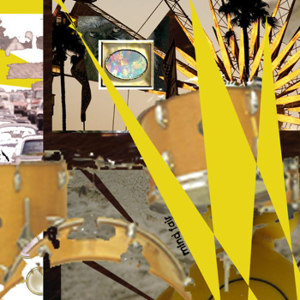 Their 2011 debut on International Feel, “Kerry’s Scene”, projected them as exponents of psychedelic Balearica with a dub-disco pulse. Subsequent singles on Meredith’s Rogue Cat sounds imprint have variously touched on hazy Balearica (“Sundown Drive” and “Give It Up”), proto deep house (“Reach The Stars”) and loose, synth-laden, mid-‘80s NYC electrofunk (“With You”). Then there was the particularly impressive Downtown Nubian EP on Golf Channel, whose four tracks flitted between kosmiche-inspired analogue weirdness (“Wrong Wire”) and heavyweight, bluesy dub disco (the title track).

In isolation, none of this makes sense. Listened to collectively, though, you begin to see trends emerging; a loose, partly improvised quality to the material, for starters, and a desire to create tracks built around real instrumentation and drum machine grooves. Mind Fair’s tracks are sparse but immersive, largely eschewing modern production tricks in favour of late ‘70s and early-to-mid ‘80s inspirations. We should get a better idea of where they’re at – and what they could be – when the debut Mind Fair album drops on Golf Channel in October. From the few clips floating round the Internet, that album seems something special; a decidedly loose, psychedelic and dubbed-out concoction that’s decidedly more leftfield – despite Meredith and Shenton’s Balearic leanings – than much of their previous material. It has the makings of one the most pleasing debut albums of the year.

For now, that can wait. Before that, they’ve decided to simultaneously release two 12” singles featuring material not included on that set. This 12”, the second of the pair, sees the Stafford-based duo exploring the warmer side of their schizophrenic Mind Fair persona.Like their more Balearic offerings, both of the original tracks here have a slightly soft-focus feel. Sure, there’s a pleasing, sun-kissed breeziness to the live disco-soul of “Take Me To The Bridge”, a celebratory concoction built around dense, rolling, Konk style live percussion. There’s also inherent warmth, largely a product of extensive use of Rhodes keys, live bass, hazy guitars and Charmaine Baines’ sweet vocal. Yet for all the shuffling dancefloor soul, live beats and mazy solos, it feels a little unsatisfactory in comparison to some of their more potent material. It is, though, something of a grower, with a chorus that you’ll be singing in the shower for days to come.

There can be fewer reservations about “Let Your Mind Take Control”, which simply oozes soul. Seemingly inspired by classic, string-laden soul and comforting, Rhodes-laden jazz-funk, it seductively shimmies from the speakers on a wave of acoustic guitars, dewy-eyed grooves and starlight chords. What really makes it, though – aside from the eyes-wide shut keys and sumptuous production – is the vocal. While the lyrics are positive and touching, there’s a heart-aching quality that resonates. It’s a brilliant slice of downtempo soul, albeit one with just the right amount of metronomic dancefloor chops.

There’s a decidedly different feel to the flipside, which sees Joel Martin (Quiet Village) and Gerry Rooney don their Velvet Season & The Hearts of Gold pseudonym to remix “C.E.R.E.M.O.N.Y”. The original, available on the proceeding Mind Fair 12”, is a decidedly epic concoction – a 12-minute deep disco hoedown that builds to a sweaty climax via bluesy harmonica, banjo, clavinet and guitar solos. Martin and Rooney’s version couldn’t be more different. It is, though superb.

In keeping with their occasional – and now hard to find – releases on Lucky Hole, the duo re-casts Mind Fair’s humid original as a spooky chunk of hypnotic, ghostly analogue deep house – all chilly chord progressions, hissing cymbals, glacial synthesizer melodies and obscure drum machine percussion. In many ways it’s the polar opposite of the original – certainly, finding elements from Mind Fair’s version is tough – but it’s nonetheless a triumph. Evocative and dreamy, but with sparse enough production to leave something to the imagination, it casts a long shadow over the material on the A-side. Given the quality of “Let Your Mind Take Control” in particular, that’s some achievement.