The Berlin-based label will pair up two unreleased tracks from the 1980s Mexican act with a remix by In Aeternam Vale.

Last seen welcoming Philadelphia-based Void Vision into the fold with a Sour 12″ that acts as a nice primer for a forthcoming full album, Mannequin’s next release finds the label switching attention to Central America with some unreleased material from Casino Shanghai. There’s a lot of underground heritage attached to Casino Shanghai, with two of its founding members, Carlos Robledo and Walter Schmidt, holding close ties to Mexico City’s post punk act Size and the more experimentally-minded troupe Decibel. Together with Humberto Alvarez and vocalist Ulalume, two more figures from Mexico City’s rich musical underground, Casino Shanghai was formed and the quartet recorded a sole album called Film, which was released in 1985

Mannequin describe themselves as “elated” to have secured two unreleased tracks from the Casino Shanghai archives to issue on the forthcoming L’Action Minimal 12″, both of which were laid to tape in the 1986 aftermath of their debut LP. Both the Stephane Mallarmé-referencing lead track “La Tumba De Edgar Allan Poe” and “L’Action Minimal” betray Casino Shanghai’s European influences, and given the Gallic nature of the lyrics it makes perfect sense for Mannequin to have approached In Aeternam Vale for remix duties. Subject of a recent feature on this site, and by all accounts a highlight of Berlin Atonal, In Aeternam Vale takes on “La Tumba De Edgar Allan Poe” for a “killer analog modular remix”.

Mannequin will release L’Action Minimal by Casino Shanghai on October 6. 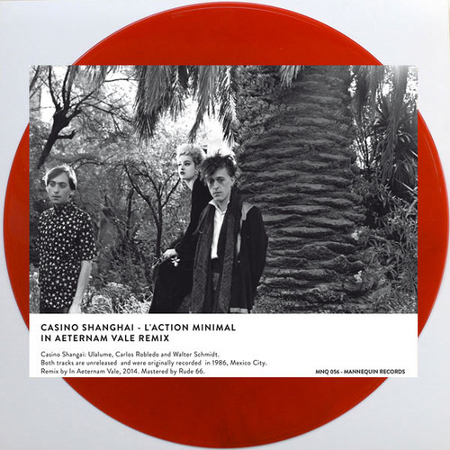