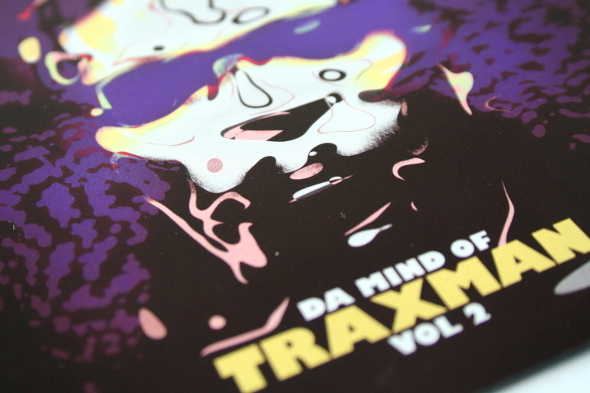 When it comes to footwork, words don’t really do the genre justice. It’s possible to describe Traxman, aka Cornelius Ferguson’s productions with a variety of whiplash-inducing adjectives: kinetic, high-powered, unflagging, dynamic, driven – they all give an approximation of what Ferguson’s craft achieves, but it’s far from the whole picture.  Immersing yourself in the culture around footwork’s origins may be a better way to holistically experience the genre; visiting Friday evenings at Chicago’s Underground Tracks Factory, you can see footwork in motion, where the sounds of the Ghetto Teknitianz collective turn teenage dancers’ feet into barely discernable stabbing blurs of power and energy. 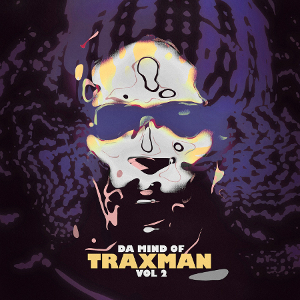 Of course, depending on geography, you may never make it to Chicago. In which case, Da Mind of Traxman Vol. 2 would be your best bet for replicating the infectious energy of the genre – a monstrous 18 track compilation that boasts the same joyful, abundant experimentalism that albums like DJ Rashad’s Double Cup set a landmark in. In interviews, Ferguson has discussed how many footwork tracks start out as shots in the dark, ideas that “maybe might work”. And while the final cuts that have made it onto Vol. 2 are likely trimmed down from a much larger body of work (certain interviews have suggested that Traxman has created up to twenty five tracks a day in some cases – spread that over a three decade plus career DJing and you’ve got a whole lot of music) every cut on this LP is executed with such a self-assured confidence that it makes bending your body into the extraterrestrial movements that footwork requires seem natural. “Can Nutin Hold Me Back” and its chopped-up soulful incantations are sure to induce jerky spasms of dancing even before the machine gun syncopated drumbeat kicks in.

“I Wanna Be High” gives the lyrics from Cypress Hill weed anthem to a soul singer, whose empathetic delivery blurs the line between drug anthem and uplifting spiritual ballad. Either way, it’s a complete belter. Likewise, “Bubbles” takes a page from Cajmere’s “Percolator” and throws it inside a rusty SNES; the result is verifiable chaos, the underwater level of Super Mario hacked by Drexciyans. “Your Just Movin” takes “Come On Feet” by Melvin Van Peebles and re-conceptualizes the 1971 soul ballad about escaping from a violent situation into a footwork-specific anthem. Whether or not this is Ferguson’s tacit acknowledgment that dancing is also providing a creative avenue for youth to get anger & frustration out of their system is up for debate, but given Chicago’s consistent spotlight in the media as a place characterized by gun and gang violence, it’s important to recognize footwork as a movement with education and empowerment on its mind.

Ferguson’s history of working at record shops might be the reason his genre knowledge is so encyclopaedic. “You can give me thousands and thousands of records… throw ‘em down, throw ‘em all on the floor, you give me two hours and I will organize everything” he recently told Cluster Mag. That Rainman-esque knowledge of every corner of the musical universe showcases itself in the sublimely wonderful Eurhythmics-sampling “Let It Roll Geto”, distilling the song’s hook into a repetitive mantra overtop which repetitions of the word “geto” dance deftly. Ferguson pushes his luck a bit on “Tha Edge of Panic” – metal and dance music have a horrendous track record (with Japan’s ADHD-inducing Babymetal perhaps being one of a very few exceptions), but even though this writer believes trying to redeem metal may be a futile project, it’s fascinating to see Ferguson create overlapping Venn diagrams of hardcore and footwork.

It’s hard to top the transcendental, understated glory of “Blow Your Whistle (Tha Out Of Here Remixx)”, which employs the same hiccupping, minimal, morse-code funk as DJ Rashad’s recent “I Don’t Give A Fuck” single, swerving and veering around the infectious vocal samples with barrelling, unstoppable energy. With DJ Rashad’s tragic recent passing, it might be difficult to not try and frame footwork in the lens of loss, or a community’s devastation in reaction to that loss. But Traxman’s latest LP is an antithesis to despair, an album that invites us to celebrate music in all its mutating and transforming incarnations. You don’t need to hail from Chicago to recognize that footwork’s innovation and vitality is worthy of celebration.