San Laurentino – Contemplations Of A Castaway

Over the course of his relatively short but fruitful career thus far, Hungarian producer Lorant Talpai has proved particularly adept at creating warm, sun-kissed, melody-rich music. On previous San Laurentino releases for Mathematics, Live at Robert Johnson and Electric Minds, Talpai has combined a masterful understanding of melody with just the right amount of high-minded dreaminess, a whisper of analogue fetishism and a neat way with composition. His tracks don’t so much charge out of the speakers as slowly tumble, with dancing electronics, ear-pleasing synth motifs and comfy chords gently drifting their way into your consciousness. 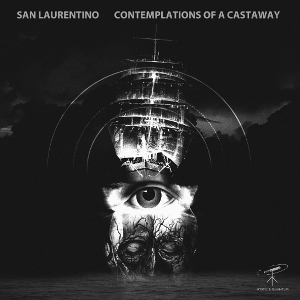 Even at their most dancefloor-friendly, his tracks feel like they were designed for more laidback moments; early mornings spent lying on the sofa in a daze, perhaps, or daydreaming while passing time on a long journey. There’s little gritty or raw about his style; he aims to please, constructing wide-eyed mood pieces that conjure evocative images of far-flung Pacific atolls, secluded Adriatic beaches and sleepy Mediterranean villages baking in the midday sun. Contemplations of a Castaway, his first stab at an album of sorts – it’s arguably an extensive EP or ‘mini-album’ rather than a fully formed long player – largely retains this breezy, soothing approach. The track titles – “Hammock With a View”, “Pacific Touch” and “Escape” in particular – accentuate the feeling than Talpai is a dreamer; a man inspired to produce by a longing for warmth, comfort and, perhaps most crucially, solace. That’s certainly evident in the synthesizer sounds he utilizes, the picturesque, almost new age nature of the melodies, and the dreaminess of his enveloping but pleasingly unfussy production.

Contemplations of a Castaway is tropical without being humid, quietly Balearic (think of it as a more sanguine, polished version of some of the more “Scandolearic” material on Full Pupp, or an endorphin-fuelled take on the Mood Hut sound) and ambient with a notable dancefloor pulse. It’s perhaps this shuffle towards the dancefloor that provides the mini album’s most noteworthy feature. While it’s all particularly gorgeous – all vibrant electronics, vivid melodies and calming textures – most of the tracks are underpinned by the distinctive swing of analogue drum machines. Sure, there’s little roughness – no L.I.E.S. style fuzz or classic Chicago jack – but it’s definitely there, providing a little more encouragement to dance than his often ultra-immersive older work.

This move towards a slightly more stripped-back sound – and it’s hardly sparse, of course – for the most part pays dividends. Opener “Hammock With A View” sounds like something you might hear on Future Times; all sturdy kick-drums, occasional handclaps, cascading marimba melodies and darting electronics. “Starfish Thong Movement”, with its classic new age house warmth, deep house chords and undulating bassline, is smoother and more evocative, but no less punchy in its rhythmic feel. The crowning glory is arguably “Car Chase 303”, an ear-pleasing fusion of rising and falling synthesizer melodies, handclap-heavy percussion and the unmistakable otherworldly electronics of the TR-303. It’s rougher than much of his work, but still melodious enough to soothe weary minds and bodies.

He arguably repeats the same trick on “Escape” – a particularly futuristic but undeniably scenic excursion into Balearic futurism, influenced by the unmistakable feel of Detroit electro – and closer “Last Corridor”, a becalmed chunk of slow house whose sharp synthesizers and chiming melodies ride a pleasingly cheap sounding rhythm. Like the rest of Contemplations of a Castaway, it stays the right side of twee, delivering a perfect balance between blissful, dreamy electronica and rhythmic swing.

A1. Hammock With A View
A2. Pacific Touch
A3. Starfish Thong Movement
B1. Escape
B2. Car Chase 303
B3. Rolling Bones
B4. The Last Corridor