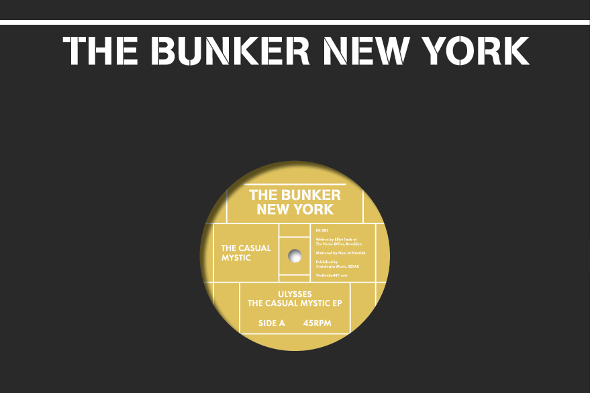 Preview the burgeoning label’s fifth release which comes courtesy of a mainstay of the New York underground.

So far, the label branch of The Bunker NYC has remained true to the stated intentions of founder Bryan Kasenic’s to reflect both the community ethos of the long running party as well as the musical direction. Voices From The Lake’s Velo Di Maya EP release has undoubtedly been The Bunker New York’s biggest release in the imprint’s first few months of activity, but the label’s narrative has really been driven by records from lesser known artists such as Leisure Muffin, Clay Wilson and Løt.te, all of whom retain close ties to The Bunker operation. The fifth release shines the light on an elder statesman of the New York underground in the shape of Elliot ‘Ulysses’ Taub, an individual best known at Juno Plus HQ for his excellent work as part of Neurotic Drum Band with John Selway, though his contribution to NYC clubbing dates back to promoting electro parties in the late ’90s.

Real life commitments have seen new releases from Ulysses slow down in recent years but Taub has evidently remained busy in the studio, with the three tracks that make up The Casual Mystic EP drawn from a vast archive of unreleased material. The below preview fully qualifies The Bunker’s statement that “when it comes to new music from Ulysses, you never know what you’re going to get,” with the full throttle “Throne Of Bubbles” complemented by two more contemplative compositions.