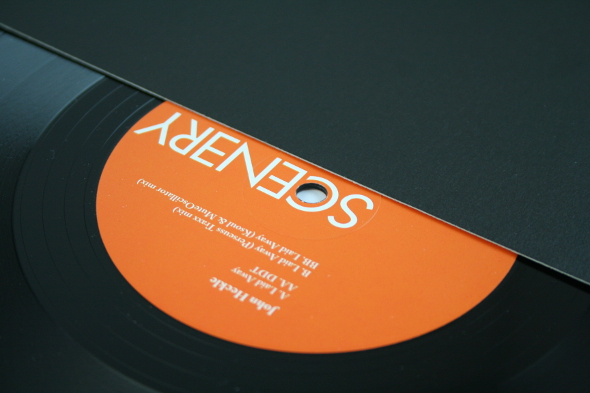 The unstoppable force of hardware energy that is John Heckle just keeps on trucking; this time bringing his bruised machinery to Scenery, the imprint that he previously delivered some remixes of Bantam Lions to back in 2012. Last year’s Desolate Figures LP was a worthy milestone for Heckle to have reached, solidifying his sound and perhaps getting a handle on the hyperactive force that seemingly goes into and comes out of his production process. Now this single takes him back into the fray of dancefloor 12”s and he’s never sounded more vital. 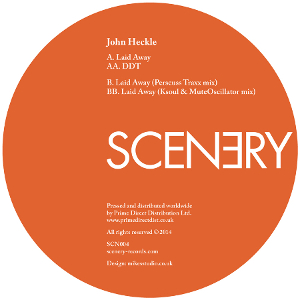 “Laid Away” rightly takes the star spot on the A1 for a multitude of reasons. It wastes no time in kicking into action with a full consignment of drum machine pressure pushing about a lopsided line in bleepy synths, with only impulsively triggered delay sends on stand-by to try and derail the track every sixteen bars or so. It’s staggering how Heckle manages to get his tracks sounding so roughshod and yet so purposeful, like a veritable beach shack of electronic parts getting tussled by a stiff Atlantic breeze. This full-bodied arrangement keeps up for a fair while, and so when the bassline comes punching in a whole extra rush of endorphins creeps up the spine, only to be tempered by the Detroitian pad that attempts to bring some reflection to this gutsy scenario. That’s not the best of the track though, as the climax of it bowls straight into a life-affirming combination of rave chords and free-jazz wig-out synth custom built for an end-of-the-night burst of euphoria. It would not be a surprise if Heckle had culled this track from closing out one of his fiery live sets, so perfectly it peaks in a dramatic and grin-inducing conclusion.

After such a rollercoaster of a track, it makes sense that “DDT” took a more moderated stance. That’s not to say it’s a filler track or secondary in any way, but it does instead burrow down into a drum-led groove that eschews fireworks to focus on stability and intensity. The beat is as ever sharp and gnarly, packed full of spitting hats, bloated tom fills and a wisened cowbell, while a subby bassline rounds out the bottom end. There’s not much more to the track and neither does there need to be. As heads down DJ tools go, this is one packed full of excitement and imagination.

The remixes take up the B-side, with both versions of “Laid Away” bringing very different results despite all being culled from the world of contemporary analogue troublemakers. Perseus Traxx is on seemingly unstoppable form of late, having laid waste to Bunker, M>O>S, Boe, Photic Fields, Chi Wax and many more over the past years, and his remix here does a perfect job of distilling small loops of the original, attaching a more stable beat and injecting some dystopian electro touches into the framework. Meanwhile KSoul & Muteoscillator go down a more singular route that pays little heed to Heckle’s version, instead conjuring up their own impeccable machine house arrangement that leans heavy on a rounded bassline while the mournful strings add extra emotional weight on top.

What’s most noticeable is the fact that, despite both being loud and proud box-jam productions at full tilt, the remixes seem mild mannered in comparison to the rowdy, bashy quality of Heckle’s creations. In a way that escaped even the forefathers of Trax, Dance Mania and all those rag-tag button bashers, Heckle wields his set up like it were putty in his hands, making plastic cases and delicate circuits bend and stretch as though they were organic matter, and yet he never loses his groove. There’s plenty of evidence of that out there, and this single is but one shining example.