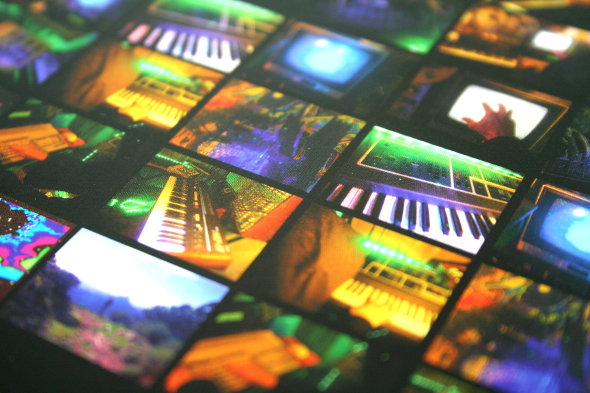 Crystal Cult 2080 is Danny Wolfers’ fourth Legowelt album in as many years, and ninth overall, so a cynic could ask do we really need it? Does it do anything that not been done before by Wolfers? The question may become even more compelling when you think of all the albums released under his other names. Cynics can go to hell, because the listening public need Legowelt more than Danny Wolfers needs us. ‘Why is that?’ you might ask, jaded music cynic. Firstly, Wolfers’ sense of humour, array of second hand jumpers, love of obsolete and knackered technology will always seem refreshingly human in the face of the self-importance that has stricken so much of electronic music. Furthermore, the Dutchman has spent years happily indulging his creative nature outside of wider appreciation, filling CDrs of material for his own Strange Life label and the likes of Bunker and Crème without any real concern for the notion of a new Legowelt transmission being reported as “being prepped for release” by the content farm. 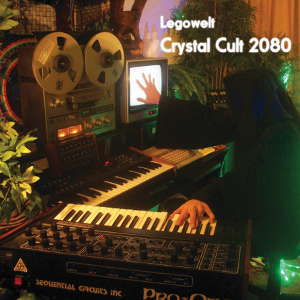 There are people whose tastes will always resonate with the madcap fusion of Detroit techno, forgotten breakbeat, Italo Disco and Chicago House that forms the sonic DNA of Legowelt’s music and whilst Crystal Cult 2080 doesn’t contain the rewarding narratives of some of Wolfers previous work (think the Satomi Taniyama CDr or the various adventures of Franz Falckenhaus), imagination, narrative, detail and escape is still rife in everything Legowelt-related. See the whole Surfer House theme adopted for the Trackman Lafonte & Bonquiqui project or the more recent Shadow Wolf cyber-zine which among other things was an amusingly nerdish way to introduce yet another of his aliases in Clendon Toblerone.

There’s not much in the way of concept or narrative to Crystal Cult 2080 beyond a nod to the Roland digital synthesizer used to create much of the music along with an allegedly “self-made DIY germanium crystal compressor”. It’s not surprising that Wolfers would choose to base his album’s execution around an unfancied slab of digital hardware picked up on the cheap in Tokyo when so many producers use adopting analogue hardware as a byword for authenticity. It’s even less surprising that Crystal Cult 2080 proves to be more compelling than much of the music produced by riding the current trend. As ever, talent outstrips method.

Spending some time with Crystal Cult 2080 reminds you Legowelt is a talent that’s unparalleled these days, and there’s plenty of room to get lost in the spells weaved by this Lowlands druid (that’s the look he’s going for on the cover, right?) across the 12 tracks. The invitation is there from the opening track “Experiential Learning”, where a sage voice strangely reminiscent of rodent sensei Splinter from the Ninja Turtles urges all to ‘seek the higher purpose’ amidst wave after wave of synthesized melody and crunched up drum breaks. Pay close attention and there’s a surfeit of rhythmic peaks that play out over the course of eight minutes and eight seconds, and the over-riding sensation as Crystal Cult 2080 plays out is that Legowelt’s at the top of his game.

Sheela ‘Xosar’ Rahman is credited as providing ‘guest vocals’ on several tracks, but they’re never as apparent as they were on “You Can’t Fly Away From The Hood”, her uncredited contribution to The TEAC Life LP from 2011. Instead Rahman’s voice is manipulated in ways that I can’t readily process; on “Ancient Rites Demoni Mundi” it sounds like she’s trapped deep in the “DIY germanium crystal compressor” with her voice stretched into a lead harmony, a trick that’s replicated on “The Future Of Myself”. Both tracks are highlights along with the aforementioned opener when you first come to terms with Crystal Cult 2080, largely because this alien vocal quality is so immediately memorable. As you become more acquainted with the album however, these tracks coalesce into one impressive whole that sounds like everything you expect from a Legowelt album.