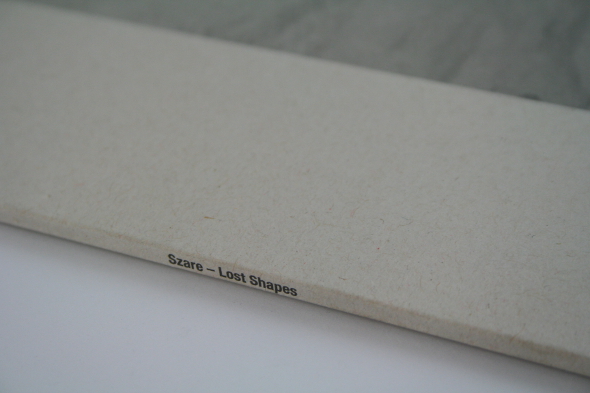 They were part of a group of techno labels that favoured anonymity, but the Frozen Border/Horizontal Ground axis wasn’t content to just put out hand-stamped vinyl. Frozen Border put together the impressive Minutes in Ice compilation in 2012, and has now released its first artist album. Szare’s Lost Shapes marks a further development for the label; while the duo’s album is available in vinyl format, the accompanying CD, with the grandiose title Carved In Those Dancing Gravestones is the main focus. Szare explain via email that “the CD is, in many ways the album, while the vinyl is just six more tracks…. of course vinyl takes priority in shop listings and in the scene in general, but we wanted to put out a lot of our material which isn’t really suitable for vinyl, and a CD by itself would not have been commercially viable so we threw it in with a double pack to make the whole thing more appealing”.

Consisting of 13 tracks, the CD offers some real insight into the range of Szare’s production palette. There’s fuzzy, dubby ambience on “Small Pieces Of It Were Scattered Across the Mountainside”, Arabian chants and woozy Middle Eastern drones on “They Carried It Back From Recife to Frankfurt by Zeppelin” and gamelan hypnotics on “Others Claimed it was a Hoax, Or Doubt It Existed”. Those seeking a more rhythmic Szare will gravitate towards textured, extended deep house jams like “Meanwhile, on the Mountainside, A Copper Flame Burns” or more percussive techno steppers like the Transglobal Underground-style samples of “What Did Kerin Mannesmann Know?” Despite the fact that Szare pull and push in many directions, the CD is segued and has a cohesive flow.

Compared to Carved In Those Dancing Gravestones, the six tracks on Lost Shapes feel more functional, but as Szare explained, they have their place. The percussive parts as ever are snappy – check the opener “Weird Sister” – but the rhythms are more stepping and less rigid than before.  With the exception of the evocative dub of “Meet You”, this approach allows Szare the space to throw in tribal drums, disco licks, warped samples of film soundtracks and the kind of gut wrenching bass that prevails on “Belt of Rule”. It’s a long way from pared back, faceless techno – Lost Shapes feels like a coming of age for both label and artist.


Carved in Those Dancing Gravestones tracklisting:

1. Small Pieces Of It Were Scattered Across The Mountainside
2. They Carried It Back From Recife to Frankfurt By Zeppelin
3. The Miners Told Nobody of Their Discovery
4. Leather Bags full of Dollars Were Transported Overnight
5. The King Himself Was Said to Have Taken an Interest
6. Radio Silence in Buenos Aires Did Not Allay Fears of a Cover Up
7. What Did Kerin Mannesman Know?
8. Hastily Arranged Meetings Contrived an Absurd Plan
9. But Anarchist Spies Had Their Ears in the Room
10. It was Sent to a Vault in Zurich and Has Not Been Seen Since 1945
11. Some Say It Was Airlifted to Alexandria and Buried in the Catacombs
12. Others Claim It Was a Hoax, Or Doubt It Ever Existed
13. Meanwhile, on the Mountainside, a Copper Flame Burns