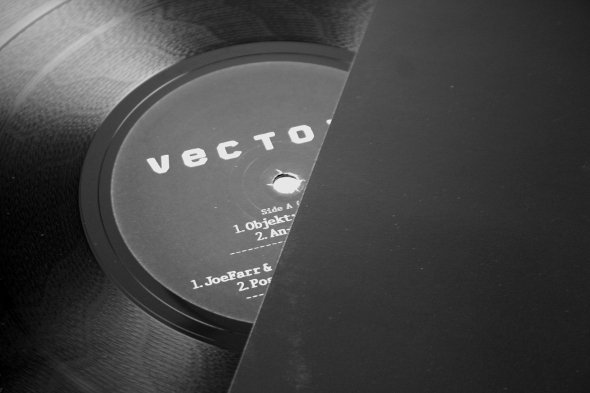 Those beloved miscreants at Power Vacuum are never ones to take the soft approach, leaving them carving out a roughshod space as frontrunners in the field of amped, distorted and unhinged techno abandon. Considering the competition in these times, that’s no mean feat. After a series of stellar artist EPs and the double pack from Bintus, it’s time for the label to widen the net and invite some other guests in to play. After all, the style of the label screams tear-out fun to anyone listening, let alone an artist looking to let off some studio steam.

It definitely feels like each track here was borne out of the premise ‘let’s make a nosebleed banger’, but in true Vacuum style there’s been no compromise on the ideas and imagination that sometimes fall by the way side in the quest for aggression. Objekt steps up first in one of his all too rare appearances, and as ever it’s a wait worth enduring as the techno-bass maverick delivers on every front. Impeccable sound design meets with thrilling pace as TJ Hertz taps more than ever into his love of electro on “Balloons”, working around a rasping breakbeat with guttural splats of bass, and yet there’s still room for some bittersweet electronica synth work that would make even the heart of Aphex Twin swoon.

Lee Douglas takes the baton for the next lap in his recently adopted An-i guise, and things start to swerve uncontrollably. It seems sturdy enough at first, what with the ludicrous bass tone playing out a 4/4 march from the offset, but then the wild scrapes, screams and general thrashing of a dying machine start flying in from all angles, willfully shirking the rhythm in favour of a nightmarish maelstrom of noise. That the linear elements keep doing their thing is no use, such is the might of the digital terrorism foisted upon the track.

After that cerebral shocker, JoeFarr and J.Tijn come on with a techno track you can really get a handle on. Not that they’re taking the soft approach either, as red lining drums fall into a vicious cycle that barrels straight into a vat of weapons grade acid. For all its nastiness, “Mustard Sucker” is a fun track that playfully cuts into a staggered breakdown intermittently, guaranteed to elicit joyous responses from the dance. For a finishing move, Ukrainian producer Positive Merge takes a more classic route into tough industrial techno, all staccato rhythm on a thudding march. It’s a mighty force to behold, if a little straight and narrow compared to the wild eyes and flamboyant spirit of the other three devils on the EP. Not for the faint hearted, and not to be underestimated, Power Vacuum have ably rounded out their grotty techno bolthole with yet more shining examples of how brutal music doesn’t have to be knuckleheaded.