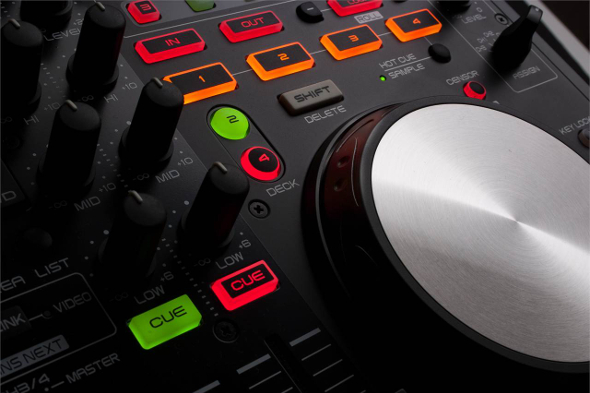 Denon’s flagship mixer and controller hybrid makes the leap to Serato. Robin Lee finds out what improvements have been made.

Denon hardware has been comparatively well received in recent years, with the most common praise being assigned to the superior build quality and user friendly design of their products, and this ethos has been carried over into the latest update to Denon’s flagship MC6000 digital mixer and controller hybrid. The original machine worked out of the box with Native Instruments Traktor, but this time around, Denon have opted to align the MC6000MK2 with Serato, something which is also reflected in improvements to the general layout of the mixer/controller.

The unit marries a comprehensive four channel mixer with practical control over Serato DJ Intro, with the possibility to upgrade to Serato DJ and take advantage of full control over four decks of software mixing, as well as incorporating vinyl turntables and CD decks. Along with improvements to the layout – especially the pitch faders which now reside on the far left and right hand side of the unit – we are treated to an improved two input and two output 24bit sound card with both balanced and unbalanced connections. Also updated are some of the software controls, which now not only include loop and cue points but also loop roll, slip and a censor control for dealing with any offensive content. To suppress the possibility of selecting the wrong deck, Denon have now added separate controls for deck selection, which trumps its predecessors single toggle button. 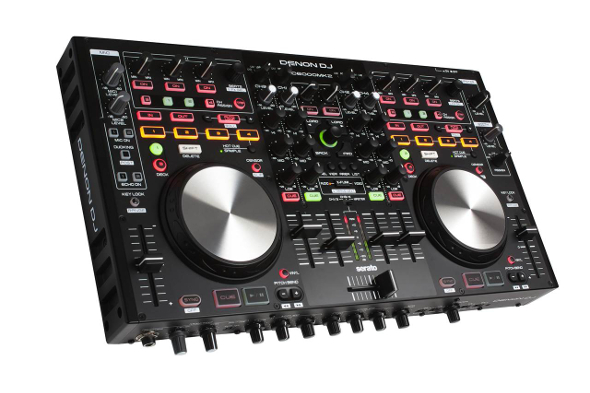 The 24bit audio is serviced by either balanced stereo XLRs or unbalanced RCA ports with a stereo/mono mini switch, presumably present to deal with any extraneous vinyl noise when mixing with turntables. In addition, there is a separate balanced booth monitor output, with dedicated level control on the front panel, for use with 6.35mm TRS cable jacks. The four line channels are unsurprisingly serviced by stereo RCA connections with mini switches to change between phono and line level. There are two mic inputs with independent gain control, EQ and echo effect; one of the microphone inputs is of the combination XLR/TRS type, whilst the second one is a simple 6.35mm TRS socket. The MC6000MK2 is a full MIDI compliant controller and as such will work with any mappable software you choose, but it works natively with Serato DJ, Mixvibes Cross and Virtual DJ. However, for fans of Native Instruments Traktor, there are mappings available via Denon’s website or on the enclosed CD, which also includes drivers for use with Windows and the latest version of Serato DJ Intro.

As previously mentioned, the MC6000MK2 upholds Denon’s tradition of making tough and durable hardware with solid control surfaces and a sturdy aluminium chassis. Some critics of the original model found that servicing it was a tricky job and that simple repairs such as replacing faders quickly became an engineering nightmare. Being aware of this problem, Denon have made servicing a lot easier in the latest version. Other criticism has been levelled at the layout’s cramped style but with the addition of the dedicated deck selection buttons, out of the way microphone EQ controls and discreetly placed adjustable fader curve controls, there really is little that can go wrong in a mixing session. Although the coloured backlit buttons don’t encompass RGB lights that change to reflect colours in the software, they still give clear feedback regarding what functions have been implemented and though the buttons are generally made of rubber there is a satisfying click to them. If you are familiar with the basic functions of DJ software, including looping and FX, then the layout couldn’t be simpler.

We’ve been told that the MK2 model has improved low latency but without an original MC6000 model available, we couldn’t do a direct comparison. Some users may find the reduction in the number of segments in the VU meter a little disappointing as the new model has only seven segments to the original’s ten. But, as I understand it, in order to keep the cost of the unit competitive, some less popular features have been streamlined. It is however possible to achieve comprehensive control of any video material that you’d like to incorporate into Serato using the video plug-in, and to this end the new MC6000MK2 allows video scratching as well as transitions. Of course, vinyl-type scratching performances can also be emulated on the touch sensitive jog wheels by enabling vinyl mode by the touch of a single button.

In the race for DJ equipment kudos, Denon have been cast as the underdogs with Pioneer leading the pack in recent years, even though many of Denon’s products are better value for money and, as some may argue, built to higher standards. In the case of the MC6000MK2, its nearest rival is another Pioneer product in the form of the Pioneer DDJ-SX, a product billed as an advanced DJ controller designed for use with Serato featuring a four channel mixer. Although the Pioneer machine has the benefit of familiarity, in terms of the well-loved jog wheels and hardware controls, it is larger and more than £200 more expensive than Denon’s leaner model. If you are a travelling DJ looking for a versatile mixer/controller hybrid, the Denon unit can fit neatly into a backpack – something that the hefty DDJ-SX would struggle to do.