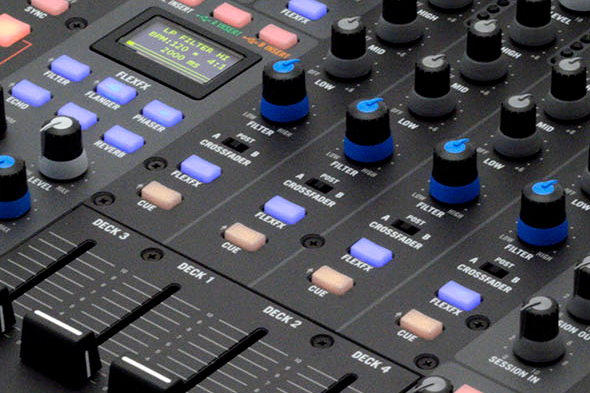 The Rane Sixty-Four is the latest four deck mixer – with Serato DJ integration – from the legendary DJ mixer design and manufacturing giant from the USA. A brand woven into the history of dance music, Rane was born at the vanguard of the disco era. In fact, one of their very first clients was the highly regarded sound designer, Richard Long, whose credits include venues that have long passed into the ether of disco folklore, including New York’s Studio 54. The development of Rane as a brand has always gone hand in hand with the development of how DJs perform, from the introduction of battle mixers for turntablists in the late ’90s to rotary club-style designs, as well as the first USB mixer which could control Serato Scratch Live. The new Rane Sixty-Four mixer seeks to update and refine that SSL mixer, by including tight integration with the recent Serato DJ software.

The layout of the Rane Sixty-Four is reminiscent of the Kontrol Z2 mixer from Native Instruments, in that all of the basic functions are in the middle of the unit whilst extended controls such as looping, browsing, setting cue points and effects are found on either side. There are four programme channels topped off with the source selection knobs at the very top of the mixer with each channel being serviced by a choice of four sources, including two separate USB sources, auxiliary and a switchable phono/CD source serviced by a mini switch on the rear panel next to the corresponding audio input. The gain trim and three band isolator EQ includes an eight segment meter to help give some visual feedback. 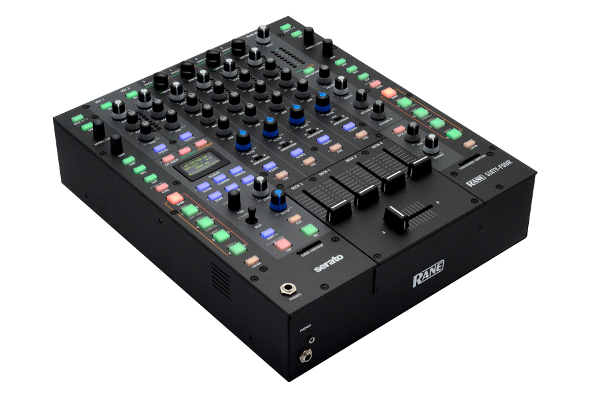 Each channel includes a dedicated filter knob and a cue button for sending the signal to the headphone cue section of the mixer, as well as a button for implementing the mixer’s onboard effects. The Rane proprietary up faders and crossfader all have adjustable contours that allow you to switch between very fast cuts or the longer fades favoured by club DJs.

It’s clear that the Sixty-Four has been designed with digital DJs in mind. One such feature is the inclusion of a total of three headphone ports designed for two 6.35mm jacks and a single 3.5mm jack simultaneously. Along with the dual USB ports to ease those troublesome change overs (especially for laptop-based DJs), this array of headphone ports further aids this potentially stressful situation. Setup is also a simple operation; once Serato DJ detects the mixer, it asks if you would like to download the drivers, which it does with little fuss, the only necessity being to restart your computer on installation. From this point on, integration with Serato DJ is complete.

The extended features of this mixer are fairly intuitive, with each side of the mixer mirroring the other. At the very top of each side is the control selection button that allows you to choose which deck to operate, and the selected channel has an LED lit under its own source selection knob once chosen, with the left side servicing decks three and one and the right side controlling decks four and two. Once a deck is selected, browsing and loading tracks is easily done using a push encoder with loop, roll, slip and loop size controls directly below. The much derided sync button can be used to sync the tempos of two pieces of music and turned off using a combination of shift and sync, to negate the possibility of accidentally exiting sync mode mid mix. 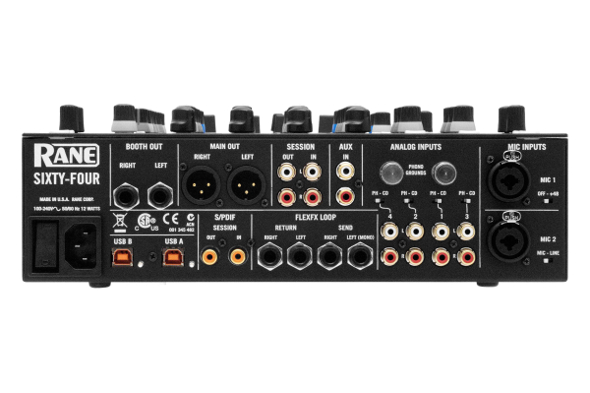 Each side also features four cue buttons with multi-layered control that allow you access to hot cues, loops and samples as well as two further layers that you can map to suit your own style of performance. The onboard effects section features a filter, flanger, phaser, echo, robot and reverb effects which are routed post-fader, and can be synced using a tap tempo button or by adjusting the selected effect to use either USB source, a beat clock or Serato DJ’s BPM. Careful manipulation of the beat joystick – in conjunction with shift or tap controls – opens up a wider variety of parameters that can be edited; if you don’t need the dual microphone features on this mixer for example, then you can map those controls to the Serato DJ software effects.

The Rane Sixty-Four does exactly what it sets out to do, which is take the design of the previous Sixty-Eight model and optimise it for Serato DJ. The Rane proprietary faders are still a huge winner here and the overall build quality is tough enough for heavy touring schedules. Some may find the plastic feel to the knobs a little offputting, but having fittings made of a material that doesn’t interfere with the all important audio output should calm any doubts of shoddy build quality (a source of pride for Rane’s US based manufacturing plant).

Although the Rane Sixty-Four is in direct competition with the DJM 900 SRT from Pioneer which is also optimised for Serato DJ, it has been pointed out that the Rane machine is a fully integrated Serato DJ controller and mixer whereas the DJM 900 SRT is merely a four channel mixer that supports the running of Serato DJ. Convincing clubs and bars to install the Rane machine instead of the more familiar Pioneer mixer will be a tall order, especially when you take into the account that the Rane mixer is more expensive than the Pioneer. However, with the ever increasing number of big name DJs using laptops, Rane’s dual USB port configuration may just have the edge over its main competitor, along together with its long history of collaboration with Serato, the Sixty-Four could well be the pick of the two.