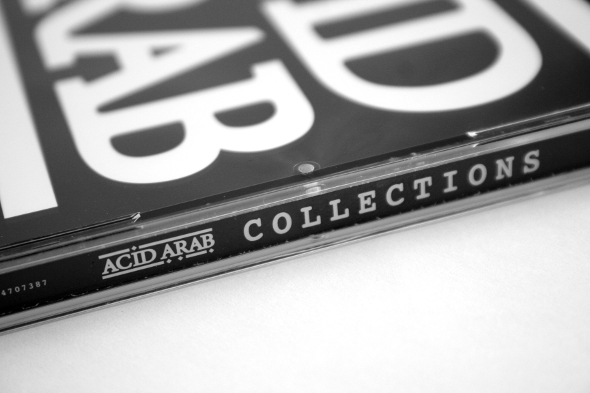 The concept behind the Acid Arab project – well known and obscure producers creating thrilling new cross-cultural fusions, inspired by music from the East – is both easy-to-follow and devilishly good. It may not necessarily be a brand new idea, but it’s one with almost limitless potential. It makes perfect sense. Technically speaking, much music from the Orient and the East (from North Africa across to the Indian sub-continent, via the Middle East) is particularly hypnotic, designed to create a trance-like state in those who dance to it. Acid house – particularly in its purest form, circa the early years of Phuture and Armando – shares this aim. The rhythmic patterns and instruments used may be different, but the end result is the same. Hypnotic grooves and rush-inducing builds have the same effect, regardless of how and where they were made.

This is what drives Guido Minisky and Herve Carvalho, the Parisian DJs-turned-producers behind Acid Arab. They came up with the concept after a particularly memorable trip to Tunisia with Versatile boss DJ Gilb’R. They told him that they wanted to put together a series of EPs and a compilation – the Acid Arab Collections – that would fuse “the acid house ghetto” with “the Oriental music ghetto”. Oh, and they’d recruit like-minded producers to lend a hand. Gilb’R, himself something of a cross-cultural fusionist, was naturally enthusiastic. Last year’s first two vinyl EPs were extraordinarily good. Exotic, intoxicating, humid, unusual and packed with ragged dancefloor moments, they featured tracks from such luminaries as Legowelt, I:Cube, Crackboy (memorably remixing Omar Souleyman’s “Shift Al Mani”), and DJ Gregory (an old hand at this house-World music fusion lark), as well as the core Acid Arab duo themselves. 10 months on from the release of the first EP, it still sounds thrillingly fresh.

So what about this first compilation-length excursion? Predictably, it’s also rather special, delivering a far more wide-ranging exploration of the key theme – electronic music plus exotic Eastern sounds and rhythms – than the more obviously dancefloor-focused EPs. Impressively, there are only two previously released tracks, Crackboy’s triumphant Omar Souleyman rework, and Pilooski’s vintage “The Wizzard Edit”, a stomping scalpel cut of a little-known Arabic track that first saw the light of day on Astrolab Recordings back in 2007. Clearly, the French producer was ahead of his time, because it fits Acid Arab Collections like a glove.

Elsewhere, there are thrilling surprises around every corner. Minisky and Carvalho’s own “Berberian Wedding” – an intensely hypnotic battle between wonky 303 tweakery, dense Middle Eastern percussion, 909 handclaps and far-sighted Arabic melodies – is astonishing. The same could be said of Professor Genius’s looser, spookier “Couronne”, whose Turkish melodies and Greek orthodox beats sound like they’ve been beamed down from some distant galaxy, rather than Jersey City, USA. Equally startling is “Madad” by previously unheard Parisian Hanaa Ouassim. It eschews the acid house for a groovy, pitched-down post-punk fusion of tribal percussion, Arabic vocals and hazy guitars, delivering one of the compilation’s most unfussy moments. It’s no less inspired for that, either.

And so it continues, with highlights coming thick and fast, from the jackin’, Juke-tempo blast of Dimmit’s powerful “Blast” (ghetto-Arab anyone?), to the inspired vintage synths, ragged acid lines and stretched-out builds of Mattia’s “Surabaya”, which provides a near perfect end to proceedings. Arguably best of all, though, is the celebratory “Ouzou Mneha (Live at Belleville)” by Danny Mahboune. The track’s driving but tactile synth bassline, simple rhythms and dense, overlaid Arabic percussion perfectly compliment the exotic melodies and impassioned vocal. Like the rest of Acid Arab Collections, it sounds almost unfeasibly far-sighted.