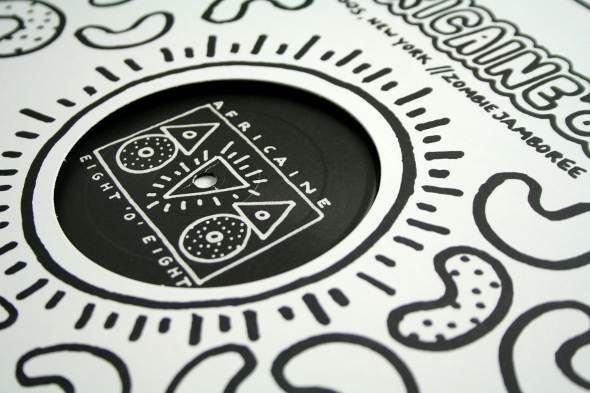 Personally speaking, there’s no doubt that Africaine 808 made some of the most startling and enjoyable electronic music of 2013. Having first appeared on the DJ Muscle series from WT Records last Spring with the pleasingly woozy, humid and intoxicating “Tummy Tummy” – a booming but tactile fusion of wide-eyed electronic melodies, pulsating bottom end, clattering analogue drums and African chanting – the previously unheralded duo went on to drop two superb EPs of their own. Both of these – the Future Times-goes-African tropical house of Cobijas, and the expansive global electronic-organic fusion of the Exotica EP – remain amongst the most inventive and downright thrilling 12” singles of recent times.

Perhaps we shouldn’t be so surprised. The German duo behind Africaine 808, Dirk Leyers and Nomad, both enjoyed long solo careers before joining forces. In the case of Leyers, he was an integral part of Cologne’s electronic scene in the early 2000s, and spent some time working in Buenos Aries with Matias Aguayo under the Closer Musik guise. Join the dots, and their unique approach – fusing a wealth of global rhythms and musical styles, from cumbia and rumba to calypso and Afrobeat, with the heavyweight throb of TR-808 drum machine percussion – makes perfect sense. It’s almost as if they’ve been working towards this point for the last decade. In fact, Africaine 808 started out as a live project, with the duo creating new versions of classic African and “Island funk” tunes on the fly, using their trusty “808” (referred to in their biography as the “third band member”).

Given the excitement caused by their first few releases, it’s nice to find them popping up on Phil South’s Golf Channels Recordings imprint, a label renowned for doing things differently. The fact that Golf Channel is based in New York – a city long famed for spurning new styles of dance music based around fusing a myriad of global influences – no doubt appealed to the Berlin-based duo. Certainly, there seems to be a clear nod to New York’s dance music heritage in “Lagos New York” that goes beyond the title; it’s a densely percussive but surprisingly breezy and melodic workout that appears to doff a cap towards early ‘80s fusionists Konk. The warm, fluid bassline, Puerto Rican drums and dancefloor-friendly backbeat are reminiscent of Konk classics such as “Elephant” and “Alien Jam”, while the sunny, life-affirming synthesizer melodies evoke thoughts of sunny strolls through Spanish Harlem. There’s enough dancefloor grunt to please those looking for heavy workouts, but the overall feel is sweet and unassuming.

“Zombie Jamboree” has less of a soft touch. Built around thumping, fast-paced 808 kicks, an addictive synth bassline and the duo’s usual righteous Latin percussion, it goes straight for the jugular and stays there for six breathless minutes. There are still echoes of Konk (see the foreboding, whispered vocals), as well as nods to classic rave (check the nagging old school riff and occasional warped sub-bass wobbles) and acid house (constantly-building drum machine handclaps). “Zombie Jamboree” is big, bold and brassy, but above all else thrillingly rush inducing. Yet there’s also a lightness of touch to the production, as you’d expect from a duo whose previous solo credits include smoky minimal techno and evocative electronica. It’s Africaine 808’s most obviously dancefloor-friendly workout so far, and possibly their most instantly accessible cut to date, too.