Perc – The Power And The Glory 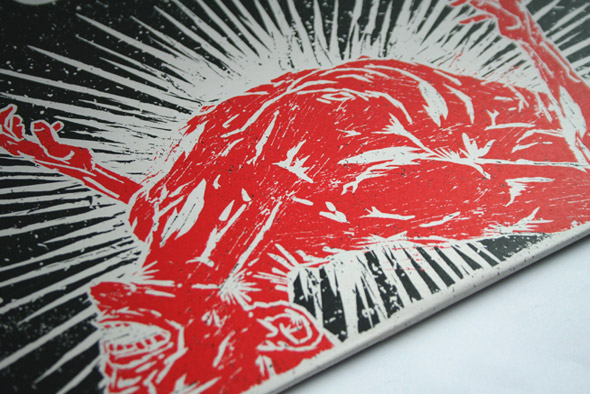 It’s becoming increasingly difficult to think about Ali Wells’ music as anything other than explicitly political. Despite the problematic nature of drawing any parallels between the declining standards of living in the country and an increased enthusiasm for so-called “industrial” techno and darker strands of electronic music as a whole, it would be hard not to see track titles such as “London We Have You Surrounded” from his debut album and “Cash 4 Gold” from 2012’s A New Brutality EP as anything less than a reflection of his own unease at the economic and political conditions the UK is facing after the boom years.

Speaking to Thump recently, Wells confirmed these political undercurrents in his second album The Power And The Glory, saying that it deals with “the dark side of power and influence; the idea that power, people being in power over other people, is not always a positive experience, and not very glorious.” This idea is most explicitly referenced in the Prime Minister and Chancellor-referencing “David & George”, which may as well be a satirical sideswipe titled “Punch & Judy” thanks to the absurd cackles thrown in among the desperate swathes of noise.

While these themes aren’t overly explicit throughout, the sense you get throughout listening to The Power And The Glory is that it’s an album created with an underlying sense of simmering unease, somehow exorcised through techno. “Rotting Sound” acts as a bracing introduction to the album, as Dan Chandler of London band Dethscalator screams tortured vocals over a gutteral combination of scraped noise and the kind of hum you’d get coming out of an electricity substation. But it’s the chords that hit you: although they’re the kind of thing you could imagine had been isolated from an old rave track, their saturated analogue quality are most reminiscent of Wendy Carlos’ “Theme From A Clockwork Orange”. As Carlos’ synthetic theme for Stanley Kubrick’s film (based on 17th century composer Henry Purcell’s “Funeral Music For Queen Mary”) heralded the story’s depiction of an English society where the bored and privileged few ran rampant in violent fashion, so “Rotting Sound” suggests an angry, desperate, crumbling vision of society.

This rancid sonic character is a thread that runs throughout the album. It’s perhaps unsurprising given Wells’ self-confessed love of the noisier, more experimental ends of the techno spectrum – he started the Submit label last year as an outlet for exactly this kind of material – but Wells’ take on the sound is remarkably self-assured. Compared to some of the more lo-fi noise-techno hybrids coming form the US underground, Wells’ production experience shows; the frazzled, pulsing energy of “Speek” has a similar backbone to a Container or Prostitutes track, but the expertly panned vocals turn what would be a drab, liner exercise into a nightmarish sonic maelstrom. “Lurch” meanwhile may make use of corroded 808 rhythms, but they have the weightiness required to work on powerful systems, while “Dumpster” is a contemporary, noise-inflected vision of classic hardcore, as squalls of noise blast over the top of white hot rave keys. Never at any point does Wells’ use of such textures feel like a hollow affectation – they’re always expertly deployed for maximum sonic effect.

The album isn’t exclusively comprised of these more searing textures, offering some moments for reflection as well. Rather than falling into the trap of simply offering a few half-baked ambient interludes to break up the action, Wells offers an impressive breadth of tonality and harmonics. “Horse Gum” contrasts what sound like distorted field recordings with emotionally disturbed melodic elements, while “Galloper” may have the kind of driving rhythms the title suggests, but its chords suggest a ray of sunlight that breaks the bleakness of Wells’ landscape. Most striking is the album’s conclusion, “A Living End”, which offers a sombre mirror image of its brutal intro, where an orchestral piano balances melodrama with genuine pathos – not exactly the easiest thing to achieve on a techno album.

Whether The Power And The Glory is a political album or not is really down to the listener, but one thing seems certain: Wells has made an album that hits the reset button on the current wave of so-called “industrial” techno. Since Wicker & Steel was released in 2011, the brand of techno Wells deals in has become increasingly popular, and sometimes to its detriment – after all, nobody could deny the increasing number of Blawan imitators who seem to fundamentally misunderstand what the style is about. Wells is no idiot though, and has certainly seen the shortcomings of such a style and addressed them wholeheartedly. Although The Power And The Glory is at times an angry album, it’s certainly not an aggressive album, and at no point is it ever a stupid album. Like Shifted, whose Under A Single Banner album last year combined the more instantly satisfying end of club techno with his more experimental inclinations, Wells has made an album that falls directly between the two camps, and does it better than anyone else. The bar has been raised, and it couldn’t have happened soon enough.