Austin Cesear – There’s A Crack In Everything 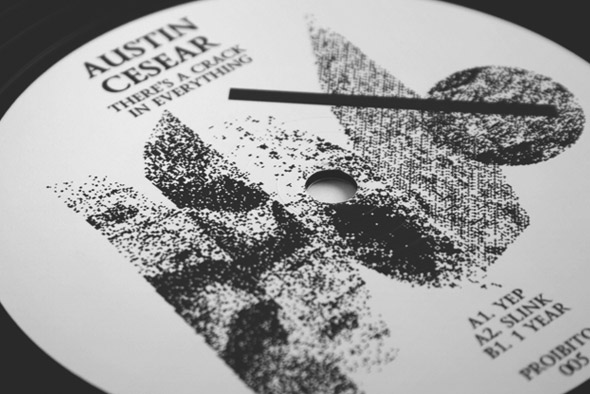 Going back to Austin Cesear’s 2012 Public Information debut Cruise Forever, it becomes quite apparent just how ahead of the game the Oakland-based producer was. While there’s certainly no shortage of lo-fi, dreamlike house music doing the rounds at the moment, Cruise Forever still stands up as a stellar piece of work, combining murky house tracks with ambient interludes that sound like the barely audible atomic hum coming off an irradiated wasteland. Although the LP veered stylistically from ethnic percussion to Mills-inspired techno in a flash, the consistently murky pallette and downtrodden mood which ran throughout its nine tracks ensured one of the strongest debuts of 2012. 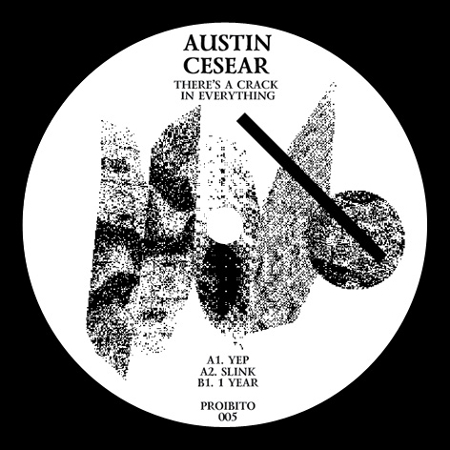 Although there has been a flood of similarly muddy music since then from a number of young producers (Huerco S, Patricia, Florian Kupfer and Anthony Naples to name a few) Cruise Forever still stands up as one the best examples of the aesthetic, making Cesear’s return – appropriately enough on Naples’ Proibito imprint – something to be excited about. The three-track There’s A Crack In Everything might be a less expansive collection of tracks than its predecessor, but its mood feels equally as self-contained.

Rather than try to emulate the blasted alternate reality soundscapes of Cruise Forever, There’s A Crack In Everything sees Cesear in an altogether sunnier disposition, engaging more explicitly with traditional deep house motifs across its three tracks. The three-minute “Yep” is a teasing exercise in filtered sample manipulation, wrangling every bit of suspense it can out of a single bar. A lone trumpet is passed through heavy delay while an indistinct acid line flutters in the background; it never really seems to get going, frustratingly fading out just as it seems to be building to some kind of peak. While it would be tempting to call it a tool, it’s as distilled an example of Cesear’s style as you could get, creating a fleeting memory of a Detroit beatdown house track floating through the wireless.

“Slink” is more emotionally direct, a looping piano refrain with crunchy percussion slowly laid over the top. Like “Yep”, it’s like a club track with the bones ripped out, stopping short of delivering full satisfaction despite its thrumming bassline. What “Slink” seems to be rather than straight dance music is an exercise in musical decay; at odd moments the loop can be heard pitching itself out of time as the tape warps its way through the spools, creating an effect that’s more akin to William Basinski than Moodymann. Only the ten-minute “1 Year”, offers the kind of dancefloor release hinted at on the A-side. While the languid strings, orchestral horns and soulful vocal are a million miles away from the relative bleakness of Cruise Forever, and it does veer dangerously close to something you might expect to find on a late ’90s Café del Mar compilation, there’s enough of Cesear’s oblique emotional delivery to keep things from sliding into the realms of dodgy pastiche.