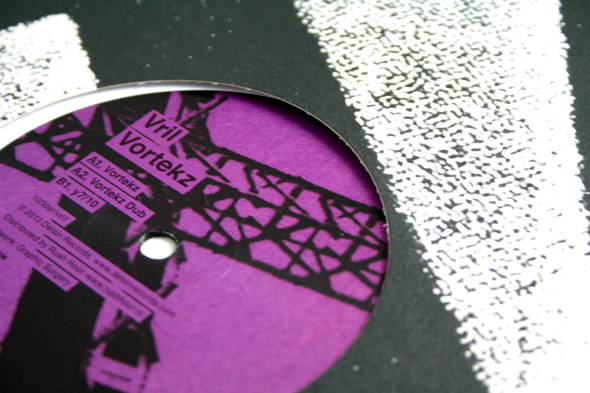 The Weimar-based Giegling label is like a family. Konstantin and Dj Dustin are its parents, Prince Of Denmark and Traumprinz their prodigal son, and Ateq the younger sibling. Then there’s Vril, the most boisterous member of the clan, who will always call Giegling home, but in recent times has left the label to explore pastures new. This Vortekz release on Delsin sees the Hannover local make the trip to Amsterdam, Holland from Spain, where he released the Flux EP on Semantica. Vril brings the dubby-techno-rave sound he cultivated during his anchorage of Giegling’s Staub series, that’s now been succeeded by the Forum offshoot, with two new productions and dub version of the title track.

As the vamp of  “Vortekz” builds it’s easy to assume this was made during Vril’s days at Staub as it features the same type of militarised euphoria heard on his 2010 1-4 EP, although this version is subtle with sustained strings and shorts bursts of static laced throughout the mix. Those strings are mostly likely what attracted the attention of Delsin founder Marsel van der Wielen as they’re reminiscent to the Detroit inspired sounds of Redshape’s machines maxing out at full tilt. The shorter dub version of “Vortekz” seems primed for solid club play, clocking in at under five-minutes with tom drums and swooping white noises added to the mix, while the chords are washier, lathered up in extra reverb and modulating filters.

The raviest element of the EP come from “y7/10”, which at its core is an alternative variation of “Vortekz” that sees Vril extend his productions’ boundaries as far as what a producer like DeepChord would in techno-mode. More hi-hats, booming drums, the occasional snare thwack, and feedback hisses mean this is the EP’s peak time cut. Vortekz is a fine example of the quality Vril can deliver, and it seems three developing years since his debut release, the world is realising the potential of his productions, which like Giegling, are now traversing the globe.