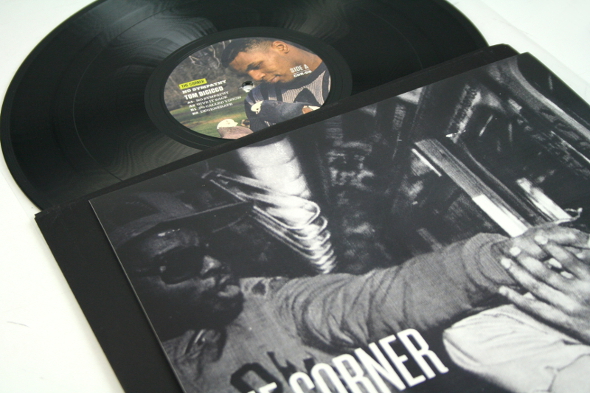 Releases from The Corner, Surface, L.I.E.S. and Sacred Summits feature in the final Best Record Sleeves selection of 2013.

Typing this column as the year nears its end, the annual nudge downwards in the release schedule gears took effect once more in December, something reflected in the quantity of records selected for inclusion on this last column of 2013. If you took the time to read the overall list for the year published earlier this month, you’ll recall that records from L.I.E.S. and Paradise Bangkok were selected for inclusion, and the KWC 92 album from Ron Morelli’s label still stands out as one of our favourite releases in terms of both music and presentation in 2013. Maximum credit must again go to Thomas Bush, Tobias Brick Centerwall, and Hampus Larsson of the L-v-L collective for that latter aspect.

In terms of other records in December that stood out for visual reasons, the most distinctive was The Corner debut of UK techno producer Tom Dicicco, whose No Sympathy 12″ continued the striking aesthetic approach adopted by designer Ryan Ilano for Anthony Parasole’s label. Undoubtedly influenced by Parasole’s Brooklyn upbringing, the art direction this time took inspiration from the iconic gang photography of Bruce Davidson with typically distinctive results. Similar in look to the Dicicco record was Badge Of Honor, the new Terrence Dixon LP for Surface Records which incorporated a monochromatic image of an uncredited, highly decorated naval officer. Simple perhaps, but this method ensured the nautical theme that runs throughout the Surface catalogue was present as soon as you picked up the record.

The PAN label and excellent sleeve design go hand in hand, and among their end of year deluge of thought provoking material, the work Bill Kouligas and Katheryn Politis did on Financial Glam, Jar Moff’s second LP of 2013, really stood out. Once again, it’s how PAN take a consistent visual theme and adapt it to one particular release that makes the cover so memorable, with the contrasting designs of the inner and outer sleeves working superbly. Though diffferent in execution, Barcelona-based design agency Córdova Canillas also utilised the element of contrast to superb effect in inner and outer sleeves for Hoes Before Bros, the Hivern Discs debut of NYC/Oslo pairing Michael & Mattis – a more conclusive display of their work for this record can be viewed here.

Releases from both Firecracker Recordings and the Emotional Response/Rescue/Especiale clutch of labels have featured regularly in this column since the feature was established some two years ago, so it’s little surprise that the new Sacred Summits label from Lindsay Todd and Stuart Leath – the pair behind those respective operations – demonstrates the utmost of attention to presentation. A reissue of a 1981 LP by Luis Pérez saw Todd replicate Laurence Giordano’s original sleeve art in his own inimitable screen printed style. Lisbon label Príncipe seem to have hit their stride this year after first emerging in quite distinct fashion in 2011, and their fifth release was once again blessed by the brushwork of Márcio Matos.