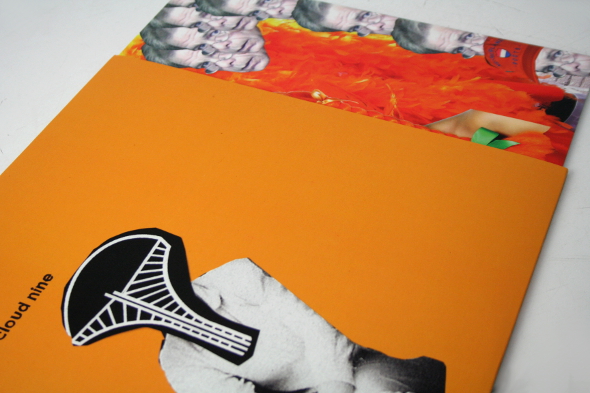 Records from Morphine, Swamp 81, Crowdspacer and Minimal Wave were among the picks for November’s best record sleeves.

It’s quite a monochrome affair this month, so let’s start with the colourful sleeves. Perks & Mini founder Misha Hollenbach has featured previously in this column, adding his distinct cut ‘n paste visual approach to a Public Possession record earlier this year. November saw the Australian excel once more, with a visual credit to the much delayed Spike retrospective from Golf Channel, whose bold and simplistic cover design contained some inner sleeve art much more in keeping with Hollenbach’s well-established approach. Equally bold but much more simplistic was the sleeve design from The Vinyl Factory for the English Magic EP (Remixed) from Jeremy Deller, which utilised the typography from a 2ft by 10ft banner brandishing the iconic vocal harmonies from A Guy Called Gerald’s “Voodoo Ray”, originally made as part of the conceptual artist’s submission to the Venice Biennale this year,

The series of Charles Cohen retrospectives have been critically lauded in several corners and rightfully so as Rabih Beani has offered the chance for many to bask in the work of an individual who is clearly one of the unsung masters of the US synth underground. It should also be said that the standard of presentation is exceptional, with understated artwork from the Venice-based independent design studio Tankboys presented on a sleeve so smooth it needs to be physically grasped to get a full idea of it. It’s been a few months since Minimal Wave featured in the Best Record Sleeves column, yet the label was back with a vengeance in November laying down no less than three equally impressive looking releases from Blancmange, Five Times Of Dust and In Aeternam Vale. From a pure design standpoint, it was perhaps the Five Times Of Dust collection Smile With The Eyes that best stood out, the contrasting black and white patterns laid over a heavyweight gatefold sleeve that felt substantial in a manner similar to the Cohen release from Morphine.

Beats In Space turned over their artistic direction for the label debut of Dukes of Chutney to London-based duo Adam Broomberg & Oliver Chanarin, whose critically acclaimed dissection of the photographic medium was conveyed with impressively subtle results on the Domino EP. No explicit presence from The Trilogy Tapes last month, though Will Bankhead’s eye for design was once again utilised by Zed Bias, adding further artistic weight to an already hefty quadruple album for Swamp 81. The Crowdspacer label founded by Joakim earlier this year has been a low-key success and deftly managed to incorporate some obscure visual themes into it’s smattering of output so far. We thought a cover photo of Bill Gates on the Cray 76 12″ couldnt be topped, but the insert of a curious and strangely Gallic looking cat that featured on the first release from Joakim and Crackboy’s POV project achieved this with aplomb.

If you tried to visualise how the music of WANDA GROUP sounds, it’s entirely possible that it would end up similar to the jagged graphics that adorned his Notown Records debut Outer Alsatian. Tellingly, the EP’s artwork was done by the amusingly abstract-minded producer himself. Equally, the somewhat hypnotic logo work from Stevie Anderson that adorned the LNCC Recordings debut of the Spirit Bear Mezcal Ensemble was wholly evocative of the effects the music from the celebrated combo have on your senses. However for sheer WTF factor, Craig Clouse’s Shit & Shine project came through with by far the most distinctive looking (not to mention distinctively named) record in November. Entitled quite amusingly Find Out What Happens When People Start Being Polite For A Fucking Change, the limited five track EP for the Gangsigns label featured a cover shot that is well and truly open to interpretation.