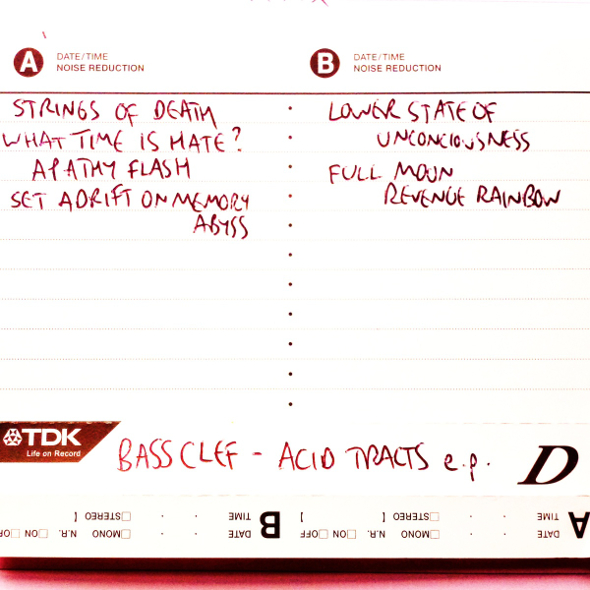 As a self-released cassette and digital offering, Ralph Cumbers latest outpouring of machine love under his Bass Clef title might run the risk of getting overlooked, which would be a great shame for some of the most vital music he has yielded in his recent spell of analogue concerns. Alongside a release under his more abstract Some Truths alias, Cumbers’ Magic + Dreams label is the engine behind this latest set of reel-bound jams, which of course lends the man complete artistic freedom to indulge his muse. At this point in time his muse appears to be modular synthesis and the potential within the myriad of boxes and wires that make up the equipment, as was evident on the Reeling & Skullways LP that neatly predates this particular release. That album surfaced on Punch Drunk and so it’s hard to imagine there were too many creative constraints to interfere with the process, but still the appeal of limited releases such as this is that the pressure of expectation and scrutiny is lifted, atleast to some extent.

It also gives Cumbers room to fully indulge one of his self-professed loves, word play, and so the titles on Acid Tracts make for some wonderful puns on instantly recognisable rave classics, from “Strings Of Death” to “What Time Is Hate”, “Apathy Flash” to “Lower State Of Unconsciousness”. Musically the reference points are not so arch, but there are definitely some discernible links to the past. “What Time Is Hate” in particular calls to mind early Autechre, when they were still conjuring up many-limbed techno from boxes rather than building mind-boggling software systems to weave their magic. Metallic percussion pings and bounces, acid flashes spit, and the bass growls through a fine crust of filtering, but the rhythmic deployment of these sounds is an interlocking mechanism of the highest calibre, once again projecting Cumbers’ standing way out in front of the tsunami of analogue productions.

“Set Adrift On Memory Abyss” meanwhile revels in limber dub of the Tubb-ified kind, a plush array of pulses and tones echoing around the chamber in the most captivating of ways. With a subtle house throb politely carrying the load, there is a hidden depth of mixability to the track that aligns it with the likes of Strategy in its most true appropriation of dub devices, but the bubbles of sound that rise to the surface steal the limelight away from anything as trite as club suitability.

At a whopping twenty minutes in length, “Lower State Of Unconsciousness” is undoubtedly the result of a particularly potent jam. Cumbers has previously stated that he tends to improvise his tracks and whittle them down after the fact, yet under examination this particular effort deservedly rebuffed the razor blade. There is an epic quality to the tumble of drums that echo on angular points throughout, while the synth work meanders from slow-release hum to high-frequency squeal, but still the central premise of the track holds tight throughout. The melodic content comes at occasional intervals, but really it is the percussion that dominates in its complexity as peaks and troughs of feedback and filtering bring the endorphin rushes well into the final quarter of the track.

What Acid Tracts has done for the Bass Clef sound is take the thrilling potential laid out on Reeling Skullways and blow it open across a wider stylistic spectrum. The two releases are certainly different concerns with different end results, and there is no denying the refined vision of the former LP, but all 60 minutes of this EP (as Cumbers stubbornly defines it) throw up even more shocks and twists whilst still being eminently fun to listen to. That surmises one of Bass Clef’s greatest strengths, so here’s hoping the lovingly packaged, impeccably delivered release doesn’t get slept on.