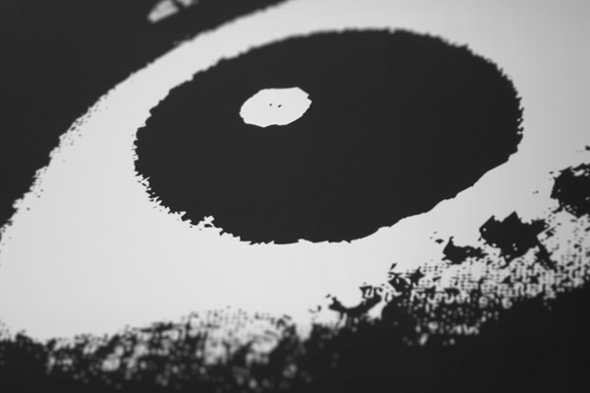 Diagonal, The Trilogy Tapes, Gang Of Ducks and Young Turks contributed some of the best dressed releases in October.

Hivern mainstays John Talabot and Pional featured prominently last month, with the former’s induction into the DJ Kicks annals of fame signalling a slight change in design direction for the long-running mix series. Whereas the most recent contribution from Maceo Plex was delivered with a cover that seemed like the result of a stink bomb going off in the midst of the photography shoot, Talabot’s cover was much more understated, with a saturated, fuzzy edge that is wholly evocative of the music covered within.

Talabot’s ongoing dalliances with West London label Young Turks resulted in further fine record sleeves as the Lost Scripts collaboration with Pional was introduced via the label’s 2013 series that featured some fine dual card sleeve design. Pional’s solo debut for Young Turks arrived late into October with some more fine artwork from Arnau Pi, the Catalan based designer who has been responsible for much of the Hivern family’s visual themes over the years.

There were several more labels to drop more than one impressively dressed record in October; chief amongst them of course, was The Trilogy Tapes, with the sleeves for EPs from Rezzett and Eomac further strengthening Will Bankhead’s position as a supreme visual and sonic curator. Guy Featherstone’s creative input continues to embolden the releases issued by Powell’s Diagonal label with vivid, glossy and bold sleeve work for records from Shit & Shine and Prostitutes, with the latter particularly striking. Working with photographer Robbie Maynard, Featherstone tracked down and took shots of two real prostitutes off the Caledonian Road in London and interspersed the resultant images with thought-provoking results.

A creative agency whose work is becoming pretty much a shoe-in for inclusion on the Best Record Sleeve column is Jonny Costello’s Adult Art Club. Their ongoing creative partnership with the various label concerns of Perc struck gold once more, taking a literal approach for the sleeve art for Perc’s Einstürzende Neubauten Interpretations on his recently minted Submit sub-label. Trevor Jackson took a similar visual approach in the art direction for his second Metal Dance compilation for Strut which continued the psuedo-sado themes of last year’s inaugural edition.

Be it their parties, website or records, art direction has always been an integral part of Scottish collective LuckyMe. Adding to their collection of memorable sleeves for Lunice, Machinedrum and Jacques Greene releases was the wholly distinctive cover art for DJ Yolo Bear’s self-titled debut. The handiwork of LuckyMe’s Eclair Fifi, DJ Yolo Bear’s amusing illustrated presence was lent a dose of menace by the searing eyeball that adorns the flip of the record (as pictured above). Similar in tone to this was the cover art for the debut transmission from Leipzig label Holger, which paired a slightly foreboding cover illustration from Benjamin Kilchhofer with the slightly less serious illustrated typeface design from Zeugler’s Reymund Schröder.

Gang Of Ducks may be purposefully mysterious to the point that the artists involved have no clue as to the label founders’ true identities, yet the collective clearly approach the medium of releasing records in the right manner. A strong visual identity has played its part in the label’s releases thus far, and their most ambitious release to date was complemented by equal attention to detail. Peckham’s My Panda Shall Fly was the subject of their attention with his Tape Tekno LP wrapped in a handmade xilographic printed cover and poly jacket.