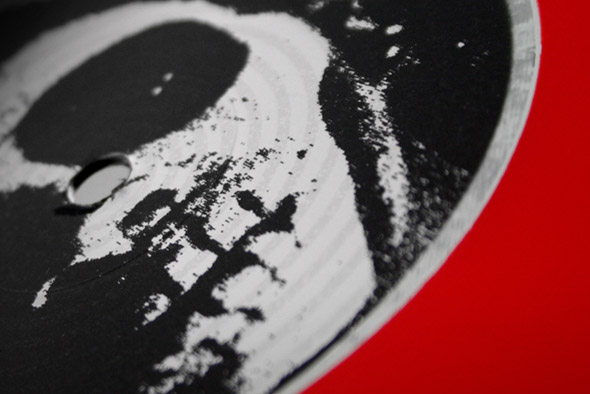 As if Swedish techno hadn’t been whipping up enough of a storm already in 2013 between the dual-powerhouse engines of Skudge and Kontra Musik, it truly seems to be the gift that keeps on giving with ever more startling releases smothered in fresh ideas. Martin ‘MRSK’ Skogehall has already contributed greatly to this bounty with his part in the Fishermen project, which found tense industrial techno slowed to a doom-laden trudge and embellished with cataclysmic synths and sound design, and now he returns with a new project that enters the fray from a different angle, while still continuing a tangible thread the former project kicked off.

What makes Fishermen so vital is the evocative nature that the producers manage to imbue such grinding, nasty techno with, a far, far cry from the monotonous drudge of most hard-as-nails techno. Likewise as Smell The Flesh, Skogehall has created the most immersive of sound worlds, inspiring spine-chilling teleportations to places commonly reserved for edge-of-your-seat movies. Undoubtedly the track names help this, but beyond the title “Hail Kongo” the opening salvo of crickets and rattle snake tell you you’re a long way from home. The rolling beat that ensues after that comes on like rumbling thunder in the distance, gradually edging closer in a tumultuous swell of reverb and filter that brings out the accents of the shamanic beat. By the time the melodic hook comes in it’s hard to not be already fully submitted to the track, but then the haunting pipe seals the deal with a refrain at turns romantic and desolate, evoking the beauty and terror of distant lands impeccably.

Where “Hail Kongo” is all Predator-esque jungle scramble, “Unsettled Conflict” is a desert pilgrimage that comes on like early Shackleton sharpened down to a focused techno point. The scope and expanse of the track is staggering, reaching across wide open spaces through ominous pads and echoing cries, while coldwave synth lines add a soundtrack element that simply enhances the strong sense of imagery associated with the music. “Blood Relic” builds on the same theme with more intricate drum arrangements, and truly it is the drum sources that define the rich character of this music, again harking back in similarity to the stark detail that garnered Shackleton so much attention in the beginning.

As the longest cut on the EP, “Struck By Venom” takes its time in revealing itself, using that alluring sound palette to summon up a slow-burning broth full of microscopic layers of cyclical rhythm stirred in a cauldron of loaded atmosphere. Never does the track peak, trough, twist or turn, simply closing its proverbial eyes and spinning in a whirling dervish of ethnic percussion kept gently simmering. After the dramatic pointers of the other tracks on the EP it’s a surprisingly measured response, but an equally successful one nonetheless.

After all that excitement, a tonic such as “Cardiac Arrest” comes as a welcome mind-cleanser; a short vignette of melancholic melody that helps the claustrophobia of the release lift like humidity leaving the rainforest. Before you can feel too great a sense of relief though comes the sample, “hope is gone. Now… is death.” It’s a gut punch of a finishing move on a release that has truly transportative qualities, leaving you significantly altered in the normal world around you like stepping out of a particularly engrossing cinema experience. For all the excellent techno made now as ever, there will never be enough material that holds this kind of power. Between this release and the recent Fishermen releases, Skogehall has proved that he is becoming a serious force to be reckoned with, both in regards to the Swedish scene and techno across the world.