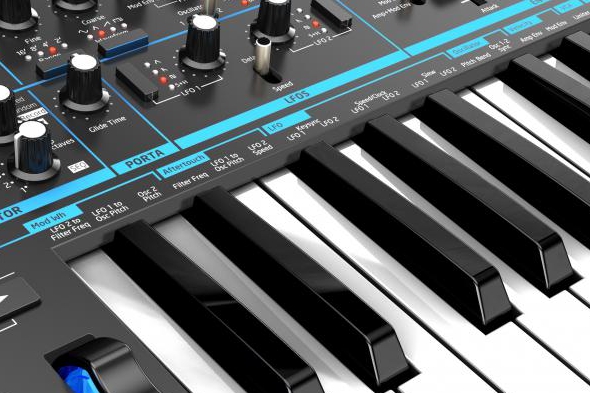 In celebration of their twentieth year, Novation have reached back in time to one of their early success stories and given their classic Bass Station synth a well-deserved overhaul. Rob Lee finds out if it lives up to its legacy.

Back in 1992, Novation were making a portable hardware keyboard MIDI controller that had been designed for use with the equally miniature Yamaha QY10 music workstation. The two units, once united, were arguably the first truly portable mini workstation for musicians and composers. The idea of portability seems to be a concept that has permeated Novation equipment ever since, not least in their classic Bass Station keyboard from 1993 which featured a pair of digitally controlled analogue oscillators with pulse and sawtooth waveforms, delivering convincing monophonic bass synth tones, leads and sound FX in a small, 25 note keyboard that could also transmit and receive MIDI data. A rack mounted version soon followed along with a version that came with an added LFO, sub oscillator, filter tracking and analogue sound effects. 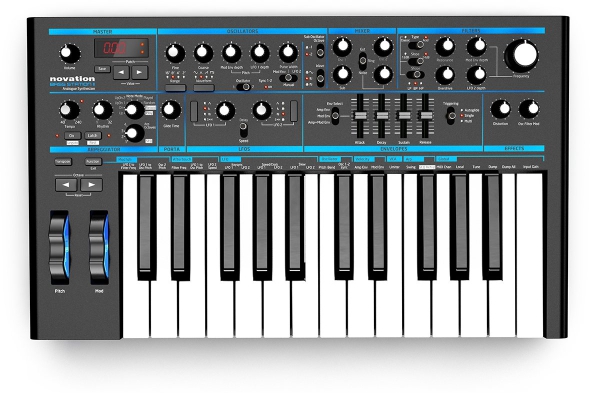 With numerous other manufacturers getting into the market of affordable hardware synths, the time seems ripe for Novation to re-enter this market with the Bass Station II, an equally lightweight portable affair with a full sized 25 note velocity sensitive keyboard that also accommodates fully assignable aftertouch. The keyboard has a comfortable feel to it, with the sort of keys you would find on classic synths. It’s an attractive unit too; the dark grey chassis houses an array of buttons, switches, sliders and knobs with a splash of aqua, it has an attractive turquoise underbelly, and even the indented pitch and modulation wheels are given a pleasing blue backlit hue. unlike the fiddly controls of its predecessor, Novation have this time opted for larger knobs, switches and sliders that make for a much smarter and user friendly experience, with little possibility of mishandling any of the controls.

The Bass Station II features two DCOs (digitally controlled oscillators) with the choice of sine, triangle, sawtooth and square (with variable pulse width) waves, all with independent tuning. The sub-oscillator tracks an octave or two octaves below oscillator one, and allows you to choose between sine, square and narrow pulse waveforms. With a noise generator to top it off, there are plenty of sound source options to get your creative juices flowing that are all mixable in the clearly marked mix section of the synth. It features the classic filter found on the original Bass Station synth with switchable low, band and high pass configurations, but this time there is a switchable diode ladder-type filter simply named “acid” for further flexibility. The largest knob on the front panel takes care of the filter cut-off duties, as is expected, with further control allowed over the resonance. The modulation envelope amount allows you to make detailed adjustments of the filter implementation including minus amounts, which comes as a pleasing addition.

“With its competitive and affordable price and powerful sound, the Bass Station II is perhaps the most impressive synth to come from Novation so far.”

Also welcome is the filter stage drive control that adds varying degrees of drive to the sound before it hits the filter. There is a single set of ADSR sliders that can be assigned to control the amp, filter modulation, or both at the same time, and for added grit, Novation have presented both distortion and filter modulation effects that can give your sounds a crunchy and aggressive timbre. Before you even hit the modulation section of this powerful synth, you’ll notice that there is plenty of muscle to the sound that lends itself to its namesake, but it shouldn’t be forgotten that almost all monophonic, analogue synths make fantastic lead instruments as well; with the sub oscillator thrown into the mixer section, there is always plenty of groin that will allow your sounds to cut through a mix and here is no exception. The modulation duties allow you to make use of two LFOs with triangle, sawtooth, square and sample and hold shapes as well as two ADSR envelopes for filter, pitch and pulse width modulation. It’s also possible to shape each waveform further using the slew function, something that allows you to soften or harden the slope of each wave giving you further sound design possibilities.

There is a fully syncable arpeggiator which encompasses up, down, up/down, up/down2 (which repeats the top and bottom note), a played mode that allows you to choose the order of the notes as well as a random mode. Perhaps more inviting is the step sequencer that allows you to store four 32 step sequences that can be synced to an external clock via MIDI or USB connections. You could use the Bass Station II in a live environment, if you are so inclined, with software such as Ableton Live but you could equally sync it to a drum machine or workstation directly without the need for a computer. Apart from being a great sounding synth with a rawness that belies its diminutive exterior, the Bass Station II offers a world of flexibility that makes it ideal for use on stage, in the DJ booth and in the studio. 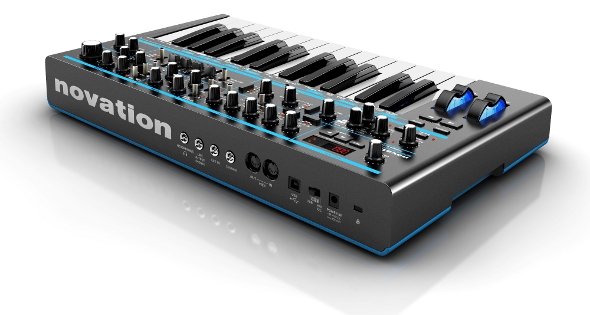 Affordable monophonic analogue synths have been the order of the day in recent times and it is inevitable that some comparisons will be made with Arturia’s MiniBrute synth. Both synths feature a 25 note keyboard, analogue signal path, sub-oscillator, two LFOs, external analogue audio inputs (allowing you to use the filter of the synth to manipulate the sound of a guitar for example). However, the MiniBrute doesn’t have the built-in step sequencer and is a slightly larger instrument than the Bass Station II, favouring added CV connections instead, which may be more of interest to those with a collection of vintage hardware. However, the Bass Station II’s modulation options are extensive, and there is little that can’t be controlled, honed or synced using the secondary function keys found over the keyboard. With its competitive and affordable price and powerful sound, the Bass Station II is the perhaps most impressive synth to come from Novation so far.